The Senate then approved the bill on a key 32-11 vote with several Democrats joining Republicans in the proposal which would allow South Carolina to restart executions after nearly 10 years.

The state can't put anyone to death now because its supply of lethal injection drugs expired and it has not been able to buy any more. Currently, inmates can choose between the electric chair and lethal injection and since the drugs are not available, they pick the method that can't be done. 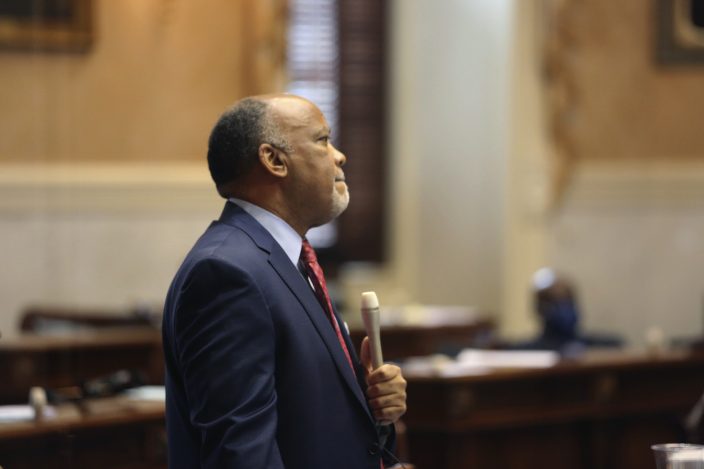 South Carolina Sen. Karl Allen, D-Greenville, waits to ask a question about a bill that would add the firing squad to the electric chair and lethal injection as execution methods in the state on Tuesday, March 2, 2021, in Columbia, S.C. The state hasn't had the chemicals to do lethal injection for years. (AP PhotoJeffrey Collins)

The Senate bill keeps lethal injection if the state has the drugs, but requires prison officials to use the electric chair if it is not. An inmate could choose a firing squad if they prefer.

The House is considering a similar bill without the firing squad option, but it could also consider the Senate version after a procedural vote by senators finalizes the bill later this week.

South Carolina still uses the electric chair first powered up in 1912 after taking over the death penalty from counties, which usually used hanging. 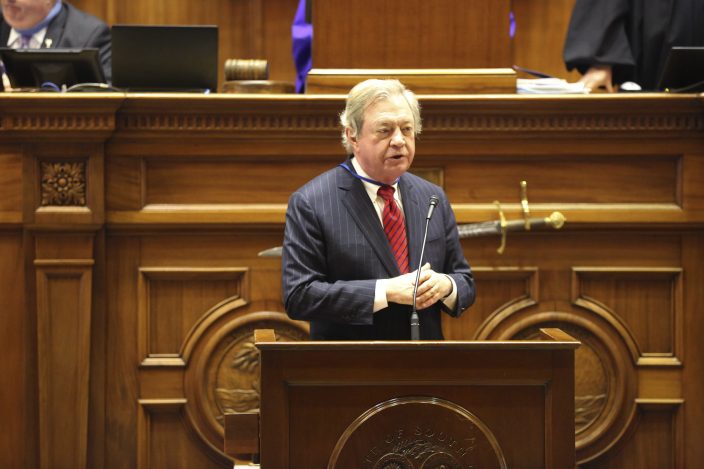 South Carolina Sen. Dick Harpootlian, D-Columbia, speaks in favor of a bill that would add the firing squad to the electric chair and lethal injection as execution methods in the state on Tuesday, March 2, 2021, in Columbia, S.C. The state hasn't had the chemicals to do lethal injection for years. (AP PhotoJeffrey Collins)

It is just one of nine states that maintains an electric chair. It would become just the fourth state to allow a firing squad with Utah, Oklahoma and Mississippi, according to the Death Penalty Information Center.

South Carolina Gov. Henry McMaster asked for lawmakers to give him any way to restart executions since a few inmates have exhausted their appeals but their death sentences can’t be carried out.

A Republican and a Democrat, both former prosecutors, proposed adding the firing squad.

The Democratic former prosecutor said it is evident in a Republican dominated state like South Carolina where the GOP gained extra seats in November that the death penalty can't be abolished like Virginia did last month.

“The death penalty is going to stay the law here for a while. If it is going to remain, it ought to be humane," said state Sen. Dick Harpootlian, who said hanging is brutal and often leads to decapitation and in electrocution, the condemned “are burned to death.”

Since the last execution was carried out in May 2011, South Carolina’s death row has dropped from about 60 inmates to 37 as of now because of natural deaths and prisoners winning appeals and being resentenced to life without parole. Prosecutors have sent just three new inmates to death row in the past decade.

The Republican former prosecutor, Sen. Greg Hembree, said Tuesday was not the time to debate whether the death penalty was right or wrong.

But several Democrats said the moral aspect of putting someone to death could not be removed from discussions over the method.

They also asked senators how they could justify having a debate over putting people to death this week when last month they passed a bill outlawing most abortions in South Carolina, which is now tied up in court.

Democratic Sen. Kevin Johnson brought up George Stinney, the youngest person executed in the U.S. in the 20th century. He was 14 when he was sent to the electric chair after a one-day trial in 1944 for killing two white girls. A judge threw out the Black teen’s conviction in 2014 . Newspaper stories reported that witnesses said the straps to keep him in the electric chair didn’t fit around his small frame.

Johnson drives by a memorial to Stinney each time he comes to Columbia from Manning.

“You think it was bad to abort a baby? Think how much worse it is to kill a person who when all is said and done is innocent," Johnson said.

Only one senator in the chamber has seen an execution. Sen. Greg Hembree, who sponsored the firing squad proposal, tried nearly a dozen death penalty cases as a prosecutor and watched one of the men he condemned to death die by lethal injection.

“There’s nothing pleasant about any of those forms. They are gruesome, they are sad and tragic in a way," Hembree said. “Justice is not always a happy place. But it is justice.”

The food assistance agency of the ...

EXPLAINER: How will jury deliberations work in Chauvin ...

After more than two weeks of witne ...