Trump issued a statement through his Save America PAC, saying Scott had his “Complete and Total Endorsement” and complimenting Scott's work on behalf of the military, law enforcement and veterans.

The only Black Republican in the Senate and one of its three Black members, Scott previously served one term in the U.S. House and has been in the Senate since then-Gov. Nikki Haley appointed him in late 2012 to succeed Jim DeMint. 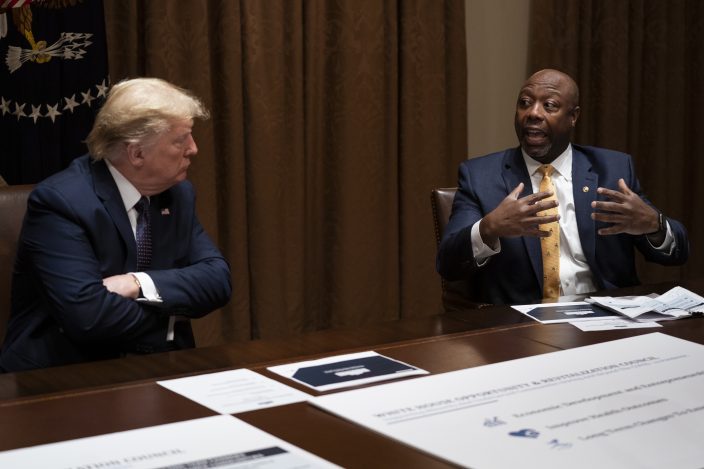 President Donald Trump listens as Sen. Tim Scott, R-S.C., speaks during a meeting on opportunity zones in the Cabinet Room of the White House, Monday, May 18, 2020, in Washington. (AP PhotoEvan Vucci)

Elected to his first full term in 2016, Scott has said that the 2022 Senate race would be his last. Scott has been mentioned as a potential candidate for the GOP presidential nomination in 2024, and his name appeared in the results of a straw poll conducted at last week's Conservative Political Action Conference.

In the Senate, Scott often aligned with Trump, voting with him nearly 91% of the time, according to FiveThirtyEight.

Trump is fresh off his weekend appearance at CPAC, where he was hailed as a returning hero. In his speech, Trump called for GOP unity, even as he exacerbated intraparty divisions by attacking fellow Republicans and continuing to repeat false claims about winning the election.

“Do you miss me yet?” Trump said after taking the stage to music from his old campaign rally soundtrack and cheers from the supportive crowd.

Leading up to the the normally mundane congressional certification of President-elect Joe Biden’s Electoral College victory on Jan. 6, Scott was among the Senate Republicans who spoke out against Trump's statements that the Senate could have legally undone that process, saying he found “no constitutionally viable means” to do so.

Hours after the deadly U.S. Capitol assault that halted those certification proceedings, Scott proposed a commission aimed at studying the 2020 election, suggesting that some pandemic-related election changes resulted in “missteps - intentional or not” meriting further examination.

Of the proposal, Scott's fellow South Carolina Sen. Lindsey Graham, one of Trump's closest congressional allies, called it a “uniquely bad idea to delay this election,” affirming that Biden is the “legitimate president of the United States.”

On Twitter, Graham said Tuesday he appreciated Trump “coming out early and strong in support of my good friend,” calling Scott “one of the most talented people I have ever known.”

Scott, however, took a more muted approach, not commenting directly, but rather through his campaign. It issued a statement pointing to areas of policy where Scott and the former president align.