The Penguins won in front of their fans for the first time in almost a year, as state coronavirus restrictions were eased at the beginning of the month and spectators were allowed into the building. Penguins’ players raised their sticks and saluted the fans in attendance following the win. 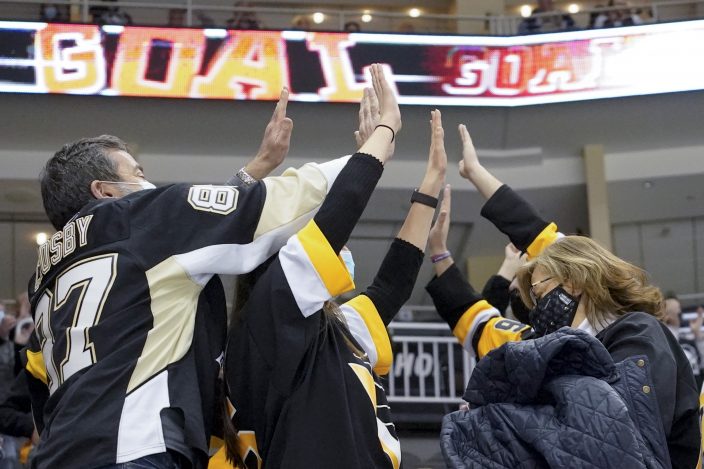 Pittsburgh Penguins fans celebrate the second goal of the period by Pittsburgh Penguins' Kasperi Kapanen (42) against the Philadelphia Flyers during the second period of an NHL hockey game, Tuesday, March 2, 2021, in Pittsburgh. It was the first game a limited number of fans were allowed to attend in Pittsburgh after some COVID 19 crowd restrictions were lifted by the state earlier this week. (AP PhotoKeith Srakocic)

The Penguins, who are tied for the most home wins since the beginning of the 2019-20 season, rebounded from one of their worst performances of the season, a shutout loss to the New York Islanders on Sunday. 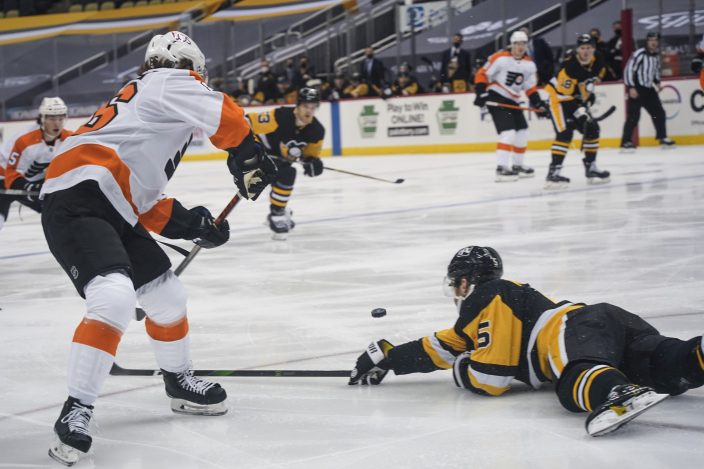 Pittsburgh Penguins' Mike Matheson (5) dives trying to stop a pass to Philadelphia Flyers' Joel Farabee, left, during the second period of an NHL hockey game, Tuesday, March 2, 2021, in Pittsburgh. Farabee got the puck and then scored on the play. (AP PhotoKeith Srakocic)

Couturier established a career-high seven-game point streak with his assist on Farabee’s goal.

Kapanen scored his second goal of the game on the power play at 8:41 of the second and Rust gave Pittsburgh a 3-1 lead at 10:45 of the period. Rust finished Kris Letang’s point shot from the top of the crease. 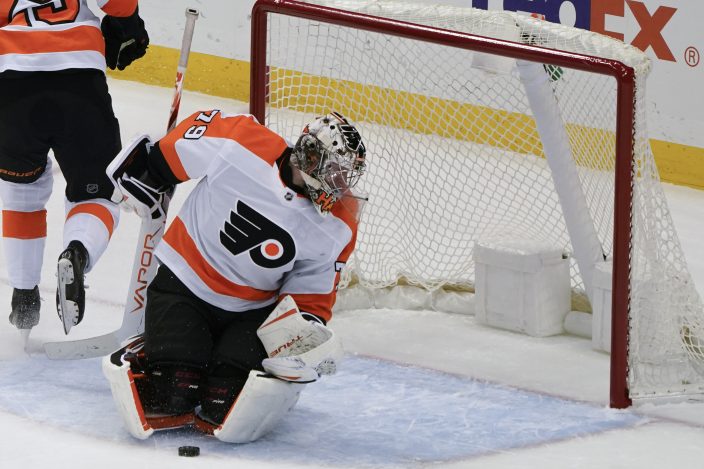 Philadelphia Flyers goaltender Carter Hart looks behind him as the puck is in front of him during the first period of an NHL hockey game against the Pittsburgh Penguins, Tuesday, March 2, 2021, in Pittsburgh. (AP PhotoKeith Srakocic)

The Penguins received approval from Gov. Tom Wolf and the state health department to open PPG Paints Arena to 15% capacity, or 2,800 fans on Tuesday. The Flyers will welcome fans back to the Wells Fargo Center on Sunday against Washington.

Tuesday’s game was the first at PPG Paints Arena with fans since the Penguins hosted the Carolina Hurricanes on March 8, 2020. Fans sat in pockets of no more than four, spaced throughout the lower bowl and half of the upper section of the arena.

The early arriving crowd gave an ovation to Evgeni Malkin, as he left the ice last during pre-game warmups and jeered the cross-state rival Flyers before puck drop. 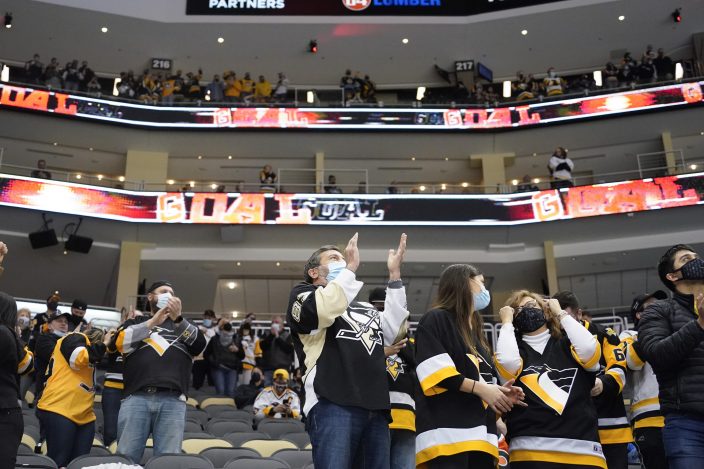 Pittsburgh Penguins fans celebrate the second goal of the period by Pittsburgh Penguins' Kasperi Kapanen (42) against the Philadelphia Flyers during the second period of an NHL hockey game, Tuesday, March 2, 2021, in Pittsburgh. It was the first game a limited number of fans were allowed to attend in Pittsburgh after some COVID 19 crowd restrictions were lifted buy the state earlier this week. (AP PhotoKeith Srakocic)

Giddy fans gave their team a standing ovation when they took the ice and an immediate “Let’s go Pens” chant broke out after the opening faceoff. 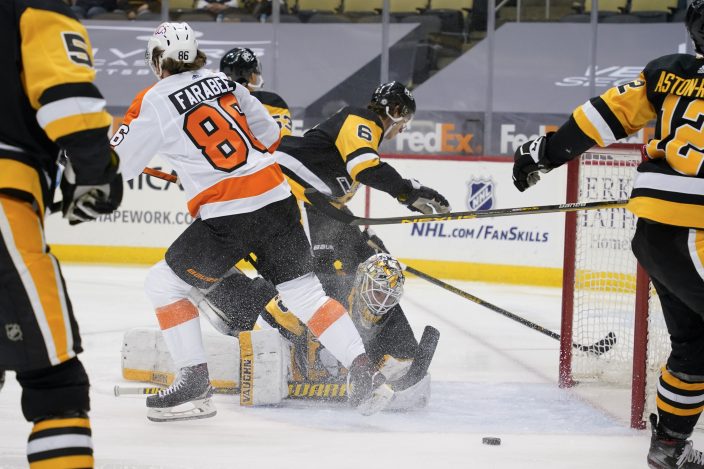 The Penguins scored three goals and outshot the Flyers 13-3 to start the second period. Shayne Gostisbehere’s turnover at the Pittsburgh blue line led to Kapanen’s breakaway goal, which tied the game and ended the Flyers’ shutout streak at 160:11.

Kapanen slid the puck past an out-of-position Hart following a slick passing sequence with Rust and Jake Guentzel to put Pittsburgh in front, 2-1. Rust and Guentzel were at the crease, behind three Flyers’ defensemen on Pittsburgh’s third goal.

Penguins’ captain Sidney Crosby missed Tuesday’s game after he was placed on the COVID-19 protocol list. Penguins’ assistant Todd Reirden was also not available because of coronavirus-related precautions.

The Penguins and Flyers play again on Thursday and Saturday as part of a current five-game homestand for Pittsburgh. It’s the first time in franchise history the Flyers will play the same opponent in three consecutive games.

Philadelphia will play 17 games in 31 days this month. Pittsburgh will play 12 of 16 games at home in March, tied for the second-most home games in a calendar month in NHL history.

Eric Hosmer delivered the tying an ...