TAIPEI, Taiwan — The first batch of AstraZeneca’s COVID-19 vaccine has arrived in Taiwan.

Health care workers, especially those who have direct contact with suspected or confirmed COVID-19 cases, will be the first to get the shots, Taiwan’s Health Minister Chen Shih-chung said at a news briefing. The island has yet to announce a mass vaccination campaign for the general public. 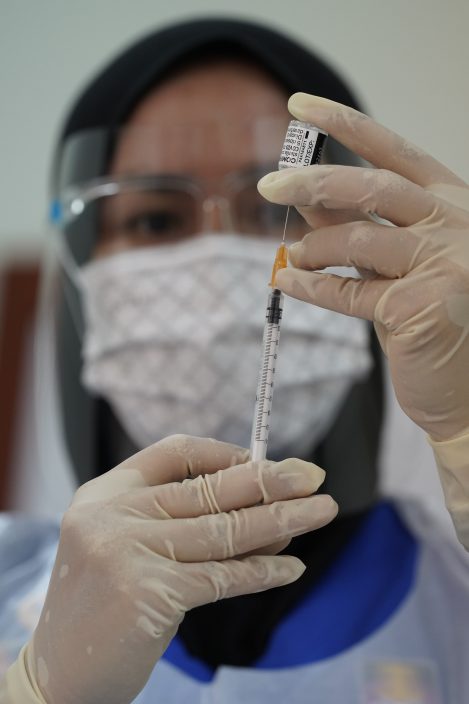 The island is planning to give the first dose to 117,000 individuals, the minister said, with the first dose providing an efficacy rate of 71%. The second dose is meant to be given eight weeks later, boosting effectiveness to 81%. 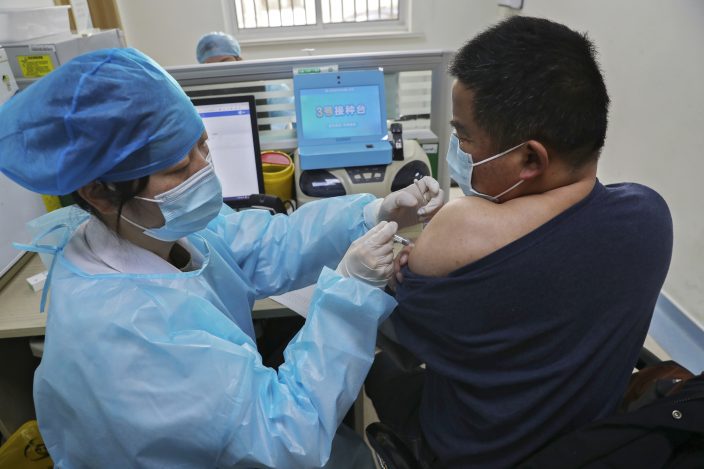 A nurse gives a shot of the Sinopharm COVID-19 vaccine developed by Beijing Institute of Biological Products Co. Ltd. to a man at a community health station in Nantong in east China's Jiangsu province Monday, Feb. 8, 2021. Chinese health experts say China is lagging in its coronavirus vaccination rollout because it has the disease largely under control, but plans to inoculate 40% of its population by June. (Chinatopix via AP)

— Texas and other states ease COVID-19 rules despite warnings 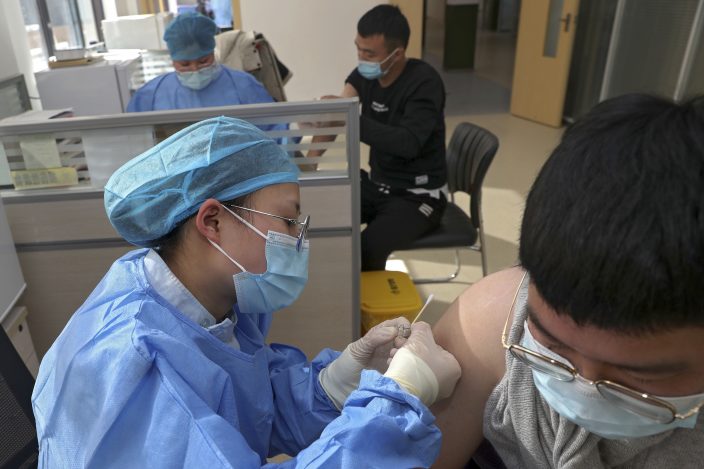 A nurse gives a shot of the Sinopharm COVID-19 vaccine developed by Beijing Institute of Biological Products Co. Ltd. to an airport worker at a health station in Nantong in east China's Jiangsu province on Jan. 29, 2021. Chinese health experts say China is lagging in its coronavirus vaccination rollout because it has the disease largely under control, but plans to inoculate 40% of its population by June. (Chinatopix via AP)

Elliott says for anyone over that age, it’s recommended that they receive either the Pfizer or the Moderna vaccine.

There are no concerns that the vaccine is unsafe for use, but Canada’s National Advisory Committee on Immunization said this week that the vaccines from Pfizer-BioNTech and Moderna are preferred for seniors due to ``suggested superior efficacy.″

France said this week it will allow some people over 65 to receive the AstraZeneca coronavirus vaccine, after initially restricting its use to younger populations because of limited data on the drug’s effectiveness.

WELLINGTON, New Zealand — New Zealand reported no new community cases of the coronavirus for a third consecutive day as the latest outbreak in Auckland appears to have been brought under control.

The government placed the nation’s largest city into a weeklong lockdown Sunday after several new community cases were found.

Top lawmakers in the Cabinet are meeting Friday to review the lockdown. Also, health officials announced they had given the first dose of the Pfizer vaccine to more than 9,000 people, including more than half of the 12,000 people who work at the border.

New Zealand currently has a supply of about 200,000 doses. The country has been slower than many to begin its vaccination campaign but is seen as lower risk after eliminating community spread of the virus.

WASHINGTON — President Joe Biden is directing states to prioritize vaccinating all teachers during the month of March, and announced that the federal government will help in the effort through its partnership with retail pharmacies.

Biden said his goal is for every pre-kindergarten through 12th grade educator, school staff member and childcare worker to receive at least one shot by the end of March.

To achieve this, Biden announced that qualifying individuals will be able to sign up this month to be vaccinated at a pharmacy near them.

Biden said that while schools are safe to reopen even before staff have been vaccinated, “time and again, we’ve heard from educators and parents that have anxieties about that,” so to “accelerate” the safe reopening teachers should be prioritized.

WASHINGTON — President Joe Biden said that the U.S. will have enough coronavirus vaccine supply to cover every adult in America by the end of May, two months earlier than anticipated.

Biden said that to accelerate production of the vaccine, drugmaker Merck & Co. will help produce rival Johnson & Johnson’s newly-approved shot. The administration is invoking the Defense Production Act, a wartime measure that gives the federal government authority to direct private companies to meet the needs of the national defense, to equip two Merck facilities to produce the Johnson & Johnson vaccine.

Biden said Johnson & Johnson will operate 24/7 to produce the vaccine. He also said the Defense Department will provide daily logistical support for the company in its efforts.

SALEM, Ore. - The Brazilian variant of coronavirus has emerged in Oregon, the first known such case on the U.S. West Coast, medical authorities said Tuesday.

The sample was sent to the U.S. Centers for Disease Control and Prevention at the end of January by medical officials in Douglas County, Oregon. They said they received the results back on Monday night, showing the P.1 variant.

“The P.1 variant ... appears to be related to business travel outside the United States to and from Brazil,” the Douglas County COVID-19 Response Team said in a statement Tuesday.

The variant, which was originally traced to Brazil, appears to be more contagious than the original COVID-19 strain. It can potentially be contracted by someone who was already infected or who has been vaccinated.

There have been 10 other cases of the P.1 variant reported in the United States, with five in Florida, two in Minnesota and one each in Oklahoma, Alaska and Maryland, the CDC says.

JACKSON, Miss. — The governor of Mississippi has said he is getting rid of most mask mandates previously imposed to try to slow the spread of the coronavirus. He is also lifting most other restrictions, including limits on seating in restaurants.

Republican Gov. Tate Reeves said he is issuing a new executive order that takes effect at 5 p.m. Wednesday and remains in place until March 31.

Reeves said the number of people hospitalized because of the virus has decreased in recent weeks, and vaccination numbers are increasing.

Until now, most of Mississippi’s 82 counties had been under a mask mandate for months.

Reeves said he is encouraging other people to wear face coverings but is not requiring it. He is asking people to follow recommendations from the state health officer, Dr. Thomas Dobbs.

Breed made the announcement as California gave the county the go-ahead to open up more of its economy as the rate of coronavirus cases, hospitalizations and deaths declines statewide.

San Francisco and Santa Clara counties in the Bay Area join five other counties in moving on from the most restrictive tier. Much of the state’s population, including Los Angeles, Orange and San Diego counties, are limited to outdoor dining and outdoor museums.

BELGRADE, Serbia — Serbia’s health authorities say they are monitoring the condition of a man who mistakenly has received two doses of vaccines from two different producers.

Epidemiologist Branislav Tiodorovic says the man’s condition is ‘under control’ and that ‘something like this must not happen again.’

Serbian media have reported that the man from the southern town of Vranje first received a Pfizer-BioNTech vaccine but then got Chinese Sinopharm as the second dose in an apparent mix-up.

Tiodorovic said the incident happened because procedures were not followed fully. Serbia also has been using Russia’s Sputnik V and Astra-Zeneca in addition to China’s Sinopharm and Pfizer.

The Balkan nation of 7 million has vaccinated over 1.5 million people with at least one dose.

In a news conference on a separate topic, Wolf said his administration’s plan will be released Wednesday.

He gave few details, but said he and a bipartisan legislative task force agreed that the Johnson & Johnson vaccine should be set aside for teachers and then other workers considered to be essential, but who are not included in the first vaccination phase.

“There’s some really important front-line workers who I think and I think the task force believes, on a bipartisan basis, should be included in that, like teachers and, not too far down the road, like child care workers, and police, and fire, grocery store workers, bus drivers,” Wolf said.

State officials expect 94,000 doses of the Johnson & Johnson vaccine to arrive this week as school districts face pressure to bring students back to classrooms for in-person instruction.

Until there's an election, the Int ...

The Latest: S Korea to resume AstraZeneca jab for ages 30-60