After the contentious two-day test gave India a 2-1 series lead against England, the series and the World Test Championship equations are simple ahead of the fourth cricket test at Ahmedabad.

A win or a draw for India will secure the series and a place in the test championship final against New Zealand. A win for England would seriously complicate matters for the hosts, and help Australia..

England opened the four-test series with a 227-run victory. India rallied to level it in Chennai with a 317-run victory and won the third third test by 10 wickets, on a spin-friendly wicket at Ahmedabad where Axar Patel and Ravichandran Ashwin dominated. 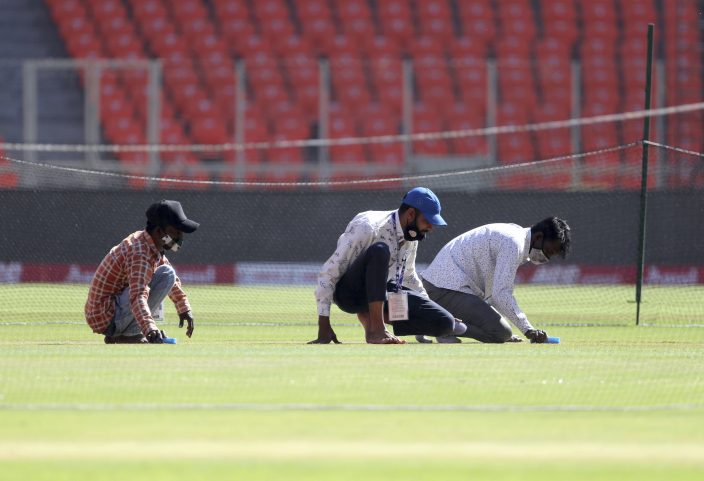 Ground staff work in the pitch area ahead of the fourth test cricket match between India and England at Narendra Modi Stadium in Ahmedabad, India, Wednesday, March 3, 2021. (AP PhotoAijaz Rahi)

England captain Joe Root is confident his team can level the series.

“We’ve got all the ingredients, all the pieces and all the skills to exploit and succeed in these conditions,” Root said. “It is important we harness that, have it in the front of our mind and be a bit braver actually; play with a little bit more freedom.

“It’s having that confidence to play the ball in front of you, not having the baggage from the previous delivery, not over-thinking the pitch, trying to see things for what they are. You need to be able to put pressure back on the bowlers.”

Root said the decision to go in with four seamers in the day-nighter in the third test was an error in judgment.

“You look at the side for the last match and we got that wrong, we read the pitch wrong in terms of the way we selected the team," he said. "We didn’t envisage it would spin as much. If the pitch is anything like the last one of course Dom (Bess) would be a fantastic option on this surface.”

India has not lost two tests in a home series since 2012, when England won.

“You look at India’s record at home in recent times and it’s incredible,” Root said. “So, for us to come away with a drawn series would be a really good achievement, especially off the back of the last two games.

“It would be a brilliant achievement to leave here 2-all. It would be a monumental effort from this group of players. So there’s loads to play for.”

India needs a series win to advance to the final and prevent a final between New Zealand and Australia.

Eric Hosmer delivered the tying an ...