IRAQ — At least 10 rockets targeted a military base in western Iraq that hosts U.S.-led coalition troops, the coalition and the Iraqi military say. It was not immediately known if there were any casualties. By Samya Kullab. SENT: 360 words, photo. 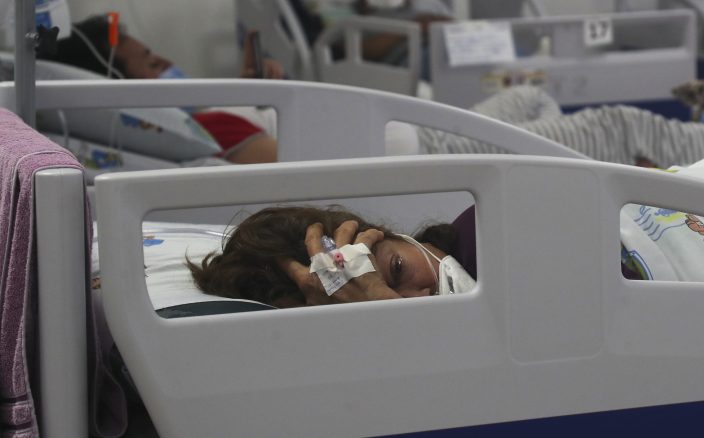 COVID-19 patients lay in beds in the cafeteria area, which was repurposed a few months ago to be able to treat more patients at the Institute of Social Security Quito Sur Hospital in Quito, Ecuador, Tuesday, March 2, 2021. The hospital, which extended its services to residents who are not part of the social security system IESS, is full and there are dozens of coronavirus patients in intermediary care waiting to get into the ICU, according to Francisco Mora, hospital coordinator of Epidemiological Surveillance and Infectology. (AP PhotoDolores Ochoa)

BIDEN-VACCINE PROMISES-ANALYSIS — President Joe Biden aims to manage expectations as he navigates the urgent need to inoculate Americans against the coronavirus, tempering bullish proclamations about the nation’s vaccine supply with warnings about the challenges ahead. By Jonathan Lemire and Zeke Miller. SENT: 970 words, photos, video. With VIRUS OUTBREAK-BIDEN — Biden vows enough vaccine for all U.S. adults by end of May; VIRUS OUTBREAK-CONGRESS — Biden urges Senate Democrats to rally behind $1.9 trillion virus bill.

IRAQ-POPE-SISTANI — In Iraq’s holiest city, a pontiff will meet a revered ayatollah and make history with a message of coexistence in a place plagued by bitter divisions. One is the chief pastor of the world-wide Catholic Church, the other a pre-eminent figure in Shiite Islam whose opinion holds powerful sway on the Iraqi street and beyond. Their encounter will resonate across Iraq, even crossing borders into neighboring, mainly Shiite Iran. By Qassim Abdul-Zahra and Samya Kullab. SENT: 1,330 words, photos. 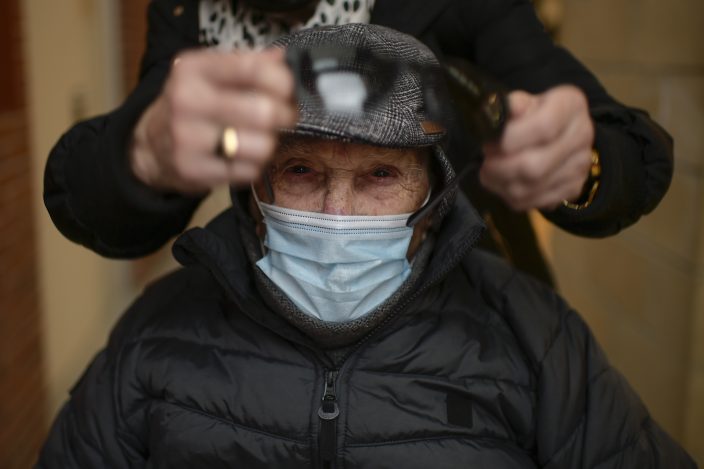 103 year old Dionisio Obanos leaves after receiving a Pfizer vaccine during a COVID-19 vaccination campaign in Pamplona, northern Spain, Tuesday, March 2, 2021. The Navarra regional government have called around 3.400 residents of the city, over the age of 80, to be vaccinated against COVID-19. (AP PhotoAlvaro Barrientos)

UNITED STATES-CHINA — Biden took office promising to move quickly to restore and repair America’s relations with the rest of the world, but one major nation has yet to see any U.S. effort to improve ties: China. The Biden administration has yet to back down on any of former President Donald Trump’s actions against Beijing. By Diplomatic Writer Matthew Lee. SENT: 970 words, photo.

CALIFORNIA-HIGHWAY CRASH — Barely a mile from where an SUV packed with 25 people struck a tractor-trailer — killing 13 inside — a cemetery with unmarked bricks is a burial ground for migrants who died crossing the border from Mexico to remote California desert. Authorities are investigating whether human smuggling was involved in Tuesday’s early-morning collision that killed the 22-year-old male driver of the SUV and 12 passengers. By Elliot Spagat. SENT: 860 words, photos, video. 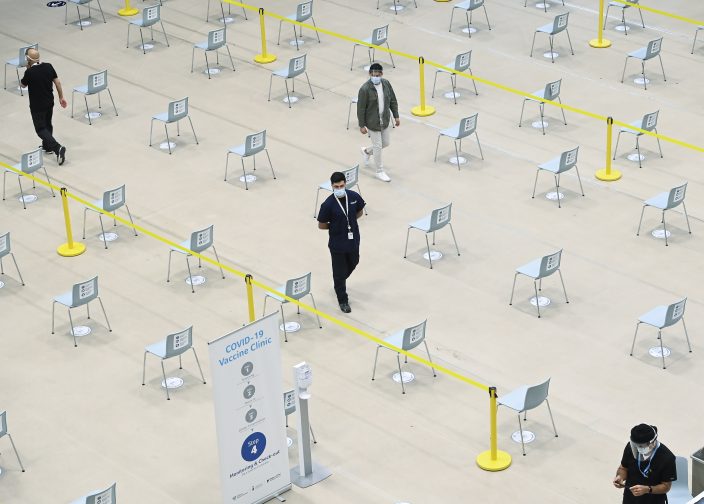 Health-care workers walk through the post-vaccine waiting area at a mass COVID-19 vaccination clinic for Peel Region during the COVID-19 pandemic in Mississauga, Ontario, on Monday, March 1, 2021. (Nathan DenetteThe Canadian Press via AP)

———————————————————————- VIRUS OUTBREAK-US — Texas becomes the biggest state to lift its mask rule, joining a rapidly growing movement by governors and other leaders across the U.S. to loosen COVID-19 restrictions despite pleas from health officials not to let their guard down yet. SENT: 980 words, photos. With VIRUS-OUTBREAK-THE-LATEST.

VIRUS OUTBREAK-SEYCHELLES-HERD IMMUNITY — The president of Seychelles says he hopes enough residents will soon be vaccinated against COVID-19 to stop the spread of the virus. SENT: 530 words, photos. Kelly Steptoe embraces her mother Patricia Nind as they wait in line for a COVID-19 vaccination at a mass vaccination site for York Region residents 80 years and older, in Richmond Hill, Ontario, on Monday, March 1, 2021. (Cole BurstonThe Canadian Press via AP)

VIRUS-OUTBREAK-KENYA-VACCINES — Kenya has received just over 1 million doses of a COVID-19 vaccine in the first batch from the global COVAX initiative that was created to ensure that low- and middle-income countries have fair access to vaccines. SENT: 290 words, photos.

TRUMP-MONEY — Trump is calling on his supporters to send their contributions directly to his own committees. SENT: 750 words, photo.

BIDEN-CABINET-HEALTH — Biden’s pick for health secretary is taking heat for his defense of abortion rights from a tag team of Republicans looking to define him — and the new administration — as out of the mainstream. SENT: 930 words, photo. UPCOMING: 990 words after 10 a.m. hearing.

TRANSPORTATION-INFRASTRUCTURE — America’s infrastructure scores near-failing grades for its deteriorating roads, public transit and storm water systems due to years of inaction from the federal government, according to the American Society of Civil Engineers. SENT: 780 words, photo.

CONGRESS-ELECTIONS BILL — House Democrats are poised to pass a sweeping elections and ethics bill, offering it up as a powerful counterweight to voting rights restrictions advancing in Republican-controlled statehouses across the country. SENT: 690 words, photos.

RENEWABLES-BIDEN — Biden wants to change the way the U.S. uses energy by expanding renewables, but he will need to navigate a host of challenges — including the coronavirus pandemic and restoring hundreds of thousands of lost jobs — to get it done. SENT: 1,140 words, photos.

KELLEN-WINSLOW-II-RAPE — Kellen Winslow II — once the highest-paid tight end in the NFL — could face more than a decade in prison for multiple rapes and other sexual offenses against five women in Southern California, including one who was homeless when he attacked her in 2018. SENT: 500 words, photo.

MICHIGAN-OFFICIALS-SEVERANCE — Michigan Gov. Gretchen Whitmer faced growing criticism after the disclosure of two additional employment-separation deals for former top officials, a day after her administration acknowledged that a key leader in the state’s response to the coronavirus pandemic was paid $155,000 following his sudden resignation. SENT: 700 words, photos.

MYANMAR-JOURNALIST CHARGED — Authorities in Myanmar have charged Associated Press journalist Thein Zaw and five other members of the media with violating a public order law that could see them imprisoned for up to three years, a lawyer said Tuesday. SENT: 460 words, photo. With MYANMAR — Myanmar forces use violence again against protesters.

AUSTRALIA-RAPE ALLEGATION — Australia’s attorney-general denied having sexual contact with a 16-year-old who had accused him of raping her 33 years ago and says he would not resign as the nation’s top law officer. SENT: 480 words, photo.

JAPAN-NUCLEAR — The head of the wrecked Fukushima nuclear plant says there’s no need to extend the current target to finish its decommissioning in 30-40 years despite uncertainties about melted fuel inside the plant’s three reactors. SENT: 510 words, photos.

FINANCIAL-MARKETS — Stocks advanced in Asia after a wobbly day on Wall Street, when the S&P 500 gave back most of its gains from a day earlier. By Business Writer Elaine Kurtenbach. SENT: 670 words, photos.

NFL WOMEN’S FORUM — Organizers of the NFL’s fifth annual Women’s Career in Football Forum were worried about conducting the event virtually, yet they pulled it off. By Pro Football Writer Barry Wilner. SENT: 820 words, photos.