German leaders are looking for ways to ease the country out of a long-running coronavirus lockdown, which they are expected to extend on Wednesday while also opening the door to relaxing some restrictions.

Chancellor Angela Merkel and the country's 16 state governors, who in highly decentralized Germany have the power to impose and lift restrictions, are expected to extend the shutdown in principle by three weeks until March 28.

But they are looking for ways to balance concern over the impact of more contagious coronavirus variants with a growing clamor for a return to a more normal life. 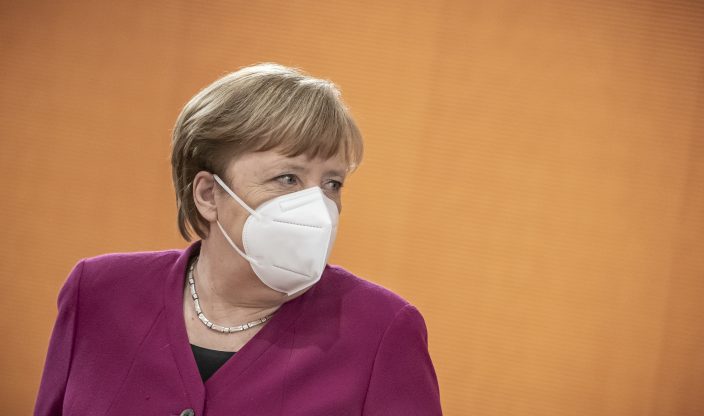 German Chancellor Angela Merkel takes off her mask at the beginning of the Federal Cabinet meeting at the Chancellery in Berlin, Germany, Wednesday, March 3, 2021. (Michael KappelerPool via AP)

The first measures already have been taken: many elementary students returned to school a week ago. And on Monday, hairdressers opened after a 2 1/2-month break.

Some German states also allowed businesses such as florists and hardware stores to open on Monday. Most stores have been closed nationwide since Dec. 16. Restaurants, bars, sports and leisure facilities have been closed since Nov. 2 and hotels are allowed only to accommodate business travelers.

When they last conferred on Feb. 10, Merkel and the governors set a target of 35 weekly new cases per 100,000 inhabitants before letting small stores, museums and other businesses reopen. The aim is to enable reliable contact-tracing.

But reaching that target soon has appeared increasingly unrealistic as cases of the more contagious variant first detected in Britain increase, with overall infections creeping slightly higher. The cases-per-week number, which peaked at nearly 200 per 100,000 inhabitants just before Christmas, has been stalled above 60 in recent days.

Governors and others have called for Wednesday's videoconference to produce step-by-step opening plans that would allow some, albeit cautious, relaxation of restrictions on a regional basis well above the target of 35 — possibly with the help of rapid tests.

Germany has seen the number of deaths from COVID-19 and people in intensive care decline in recent weeks.

But it has been struggling to ramp up its vaccination drive, which has drawn widespread criticism for being too slow, even as the supply of vaccines improves. German lawmakers have ditched plans for hefty fines for people who skip the vaccine queue.

As of Tuesday, 5.3% of the population had been given a first vaccine dose and 2.7% had received two doses.

The national disease control center said Wednesday that 9,019 new coronavirus cases were reported over the past 24 hours, bringing the total so far to 2.46 million. There were another 418 deaths in the nation of 83 million, raising Germany's death toll to 70,881.

The New York Mets got homers from ...