Legislators in more than 20 states have introduced bills this year that would ban transgender girls from competing on girls’ sports teams in public high schools. Yet in almost every case, sponsors cannot cite a single instance in their own state or region where such participation has caused problems.

The Associated Press reached out to two dozen state lawmakers sponsoring such measures around the country as well as the conservative groups supporting them and found only a few times it’s been an issue among the hundreds of thousands of American teenagers who play high school sports.

In South Carolina, for example, Rep. Ashley Trantham said she knew of no transgender athletes competing in the state and was proposing a ban to prevent possible problems in the future. Otherwise, she said during a recent hearing, “the next generation of female athletes in South Carolina may not have a chance to excel." 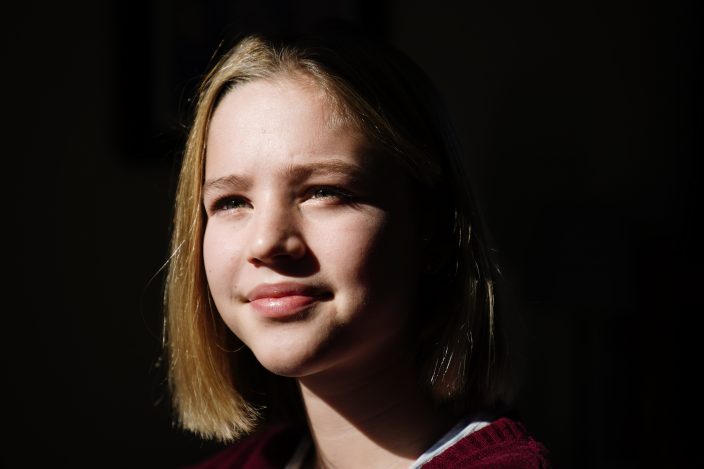 Rebekah Bruesehoff, 14, poses for a portrait in Cherry Hill, N.J., Friday, Feb. 26, 2021. “I know what it’s like to have my gender questioned,” the transgender teenager said. “It’s invasive, embarrassing. I don’t want others to go through that.” (AP PhotoMatt Rourke)

In Tennessee, House Speaker Cameron Sexton conceded there may not actually be transgender students now participating in middle and high school sports; he said a bill was necessary so the state could be “proactive.”

Some lawmakers didn't respond to AP's queries. Others in places like Mississippi and Montana largely brushed aside the question or pointed to a pair of runners in Connecticut. Between 2017 and 2019, transgender sprinters Terry Miller and Andraya Yearwood combined to win 15 championship races, prompting a lawsuit.

Supporters of transgender rights say the Connecticut case gets so much attention from conservatives because it’s the only example of its kind. 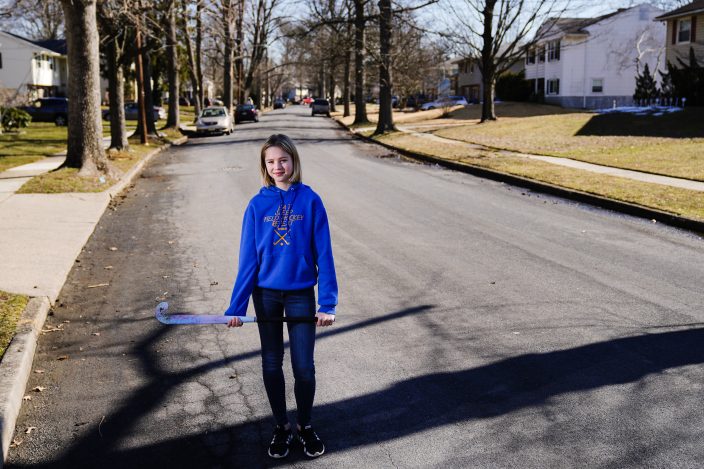 Rebekah Bruesehoff, 14, poses for a portrait in Cherry Hill, N.J., Friday, Feb. 26, 2021. The transgender teenager competes on her middle school field hockey team and hopes to keep playing in high school. "It’s all been positive,” she said. “The coaches have been really helpful.” (AP PhotoMatt Rourke)

“It’s their Exhibit A, and there’s no Exhibit B -- absolutely none,” said Shannon Minter, legal director of the National Center for Lesbian Rights and a prominent trans-rights attorney.

The multiple sports bills, he says, address a threat that doesn’t exist.

There’s no authoritative count of how many trans athletes have competed recently in high school or college sports. Neither the NCAA nor most state high school athletic associations collect that data; in the states that do collect it, the numbers are minimal: No more than five students currently in Kansas, nine in Ohio over five years. 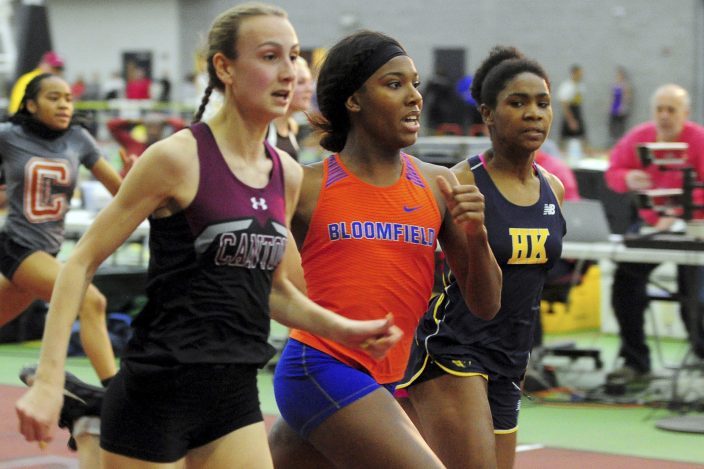 Transgender adults make up a small portion of the U.S. population, about 1.3 million as of 2016, according to the Williams Institute, a think tank at the UCLA School of Law that specializes in research on LGBTQ issues.

The two dozen bills making their way through state legislatures this year could be devastating for transgender teens who usually get little attention as they compete.

In Utah, a 12-year-old transgender girl cried when she heard about the proposal, which would separate her from her friends. She’s far from the tallest girl on her club team, and has worked hard to improve her times but is not a dominant swimmer in her age group, her coach said. FILE - In this Saturday, Feb. 24, 2018 file photo, a referee raises the arm of Mack Beggs of Euless Trinity after he defeated Chelsea Sanchez of Morton Ranch to defend the Class 6A girls 110-pound title during the UIL State Wrestling Championships at the Berry Center in Cypress, Texas. Texas limits transgender athletes to teams conforming with the gender on their birth certificate. That law came under criticism in 2017 and 2018, when transgender male Beggs won state titles in girls’ wrestling competitions after he was told he could not compete as a boy. (Jason FochtmanHouston Chronicle via AP)

“Other than body parts I’ve been a girl my whole life,” she said.

The girl and her family spoke with The Associated Press on the condition of anonymity to avoid outing her publicly.

Those who object to the growing visibility and rights for transgender people, though, argue new laws are needed to keep the playing field fair for cisgender girls. 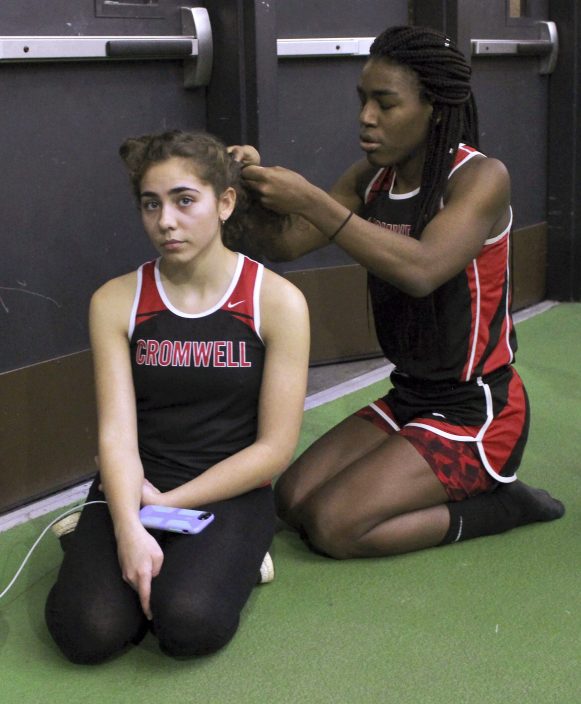 “When the law does not recognize differences between men and women, we’ve seen that women lose,” said Christiana Holcomb, an attorney for the Alliance Defending Freedom, which filed the Connecticut lawsuit on behalf of four cisgender girls.

One of those girls, Chelsea Mitchell, defeated Terry Miller -- the faster of the two trans sprinters -- in their final two races in February 2020

The ADF and others like it are the behind-the-scenes backers of the campaign, offering model legislation and a playbook to promote the bills most of them with common features and even titles, like the Save Women’s Sports Act. 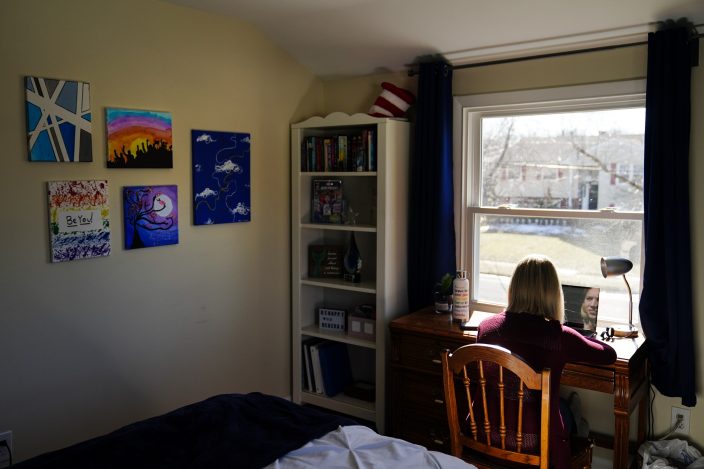 Rebekah Bruesehoff, 14, works on school assignments at home in Cherry Hill, N.J., Friday, Feb. 26, 2021. While New Jersey has a trans-inclusive sports policy, the field hockey player is distressed by proposed bans elsewhere – notably measures that might require girls to verify their gender. “I know what it’s like to have my gender questioned,” Rebekah said. “It’s invasive, embarrassing. I don’t want others to go through that.” (AP PhotoMatt Rourke)

When asked for other examples of complaints about middle or high school transgender athletes, ADF and the Family Policy Alliance, cited two: One involved a Hawaii woman who coaches track and filed a complaint last year over a trans girl competing in girls’ volleyball and track. The other involved a cisgender girl in Alaska who defeated a trans sprinter in 2016, then appeared in a Family Policy Alliance video saying the trans girl’s third-place finish was unfair to runners who were further behind.

Only one state, Idaho, has enacted a law curtailing trans students’ sports participation, and that 2020 measure is blocked by a court ruling.

“This is not about sports,” he said. ”It’s a way to attack trans people.”

Texas is among those with a ban, limiting transgender athletes to teams conforming with the gender on their birth certificate.

That policy came under criticism in 2017 and 2018, when trans male Mack Beggs won state titles in girls’ wrestling competitions after he was told he could not compete as a boy.

While Beggs, Miller and Yearwood were the focus of news coverage and controversy, trans athletes more commonly compete without any furor -- and with broad acceptance from teammates and competitors.

"It’s all been positive,” she said. “The coaches have been really helpful.”

While New Jersey has a trans-inclusive sports policy, Rebekah is distressed by the proposed bans elsewhere – notably measures that might require girls to verify their gender.

“I know what it’s like to have my gender questioned,” Rebekah said. “It’s invasive, embarrassing. I don’t want others to go through that.”

The possibility that any athlete could have to undergo tests or examinations to prove their gender was among the reasons that Truman Hamburger, a 17-year-old high school student in North Dakota, showed up at the statehouse to protest a proposed ban.

“Once you open up that door on gender policing, that’s not a door you can easily shut,” he said.

Sarah Huckman, a 20-year-old sophomore at the University of New Hampshire, ran track and cross country for three years at Kingswood Regional High School in Wolfeboro, New Hampshire, after coming out as trans in 7th grade.

Huckman showed great talent in the sprints and hurdles, but was not dominant on a statewide level. In her senior year, she won several events in small and mid-size meets, and had 6th place and 10th place finishes in the Division II indoor state championships.

The proposed bans appall her.

“It’s so demeaning toward my group of people,” she said. “We’re all human beings. We do sports for the love of it.”

Associated Press reporters covering statehouses across the U.S. contributed to this report.