Maine Sen. Susan Collins said Wednesday she will support New Mexico Rep. Deb Haaland to be Interior secretary, the first Republican senator to publicly back a nominee set to become the first Native American to lead a Cabinet agency.

Manchin, a moderate from West Virginia, had been publicly undecided through two days of hearings on Haaland’s nomination by President Joe Biden. Manchin caused a political uproar last month by announcing plans to oppose Biden’s choice for budget director, Neera Tanden, a decision that played a key role in Tanden's withdrawal on Tuesday. 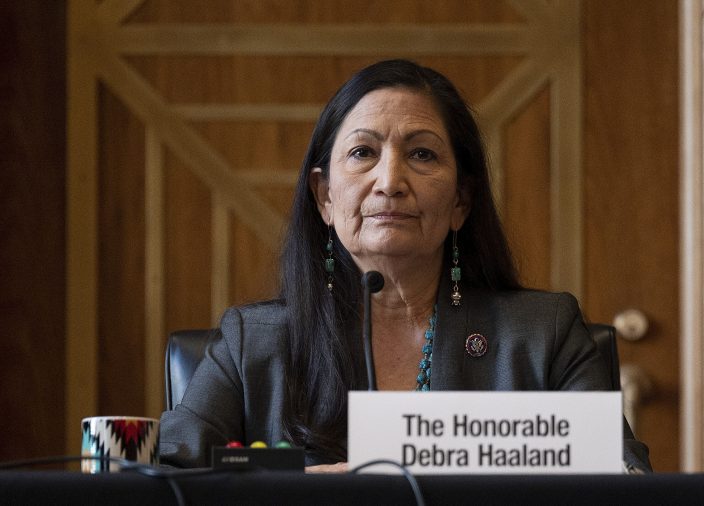 FILE - In this Tuesday, Feb. 23, 2021, file photo, Rep. Deb Haaland, D-N.M., listens during the Senate Committee on Energy and Natural Resources hearing on her nomination to be Interior secretary, on Capitol Hill in Washington. Some Republican senators labeled Haaland "radical" over her calls to reduce dependence on fossil fuels and address climate change, and said that could hurt rural America and major oil and gas-producing states. The label of Haaland as a "radical" by Republican lawmakers is getting pushback from Native Americans. (Jim WatsonPool Photo via AP, File)

Collins, a moderate who frequently sides with Manchin, said she differs with Haaland on a number of issues but appreciated her role in helping to lead House passage of the Great American Outdoors Act. The landmark law, co-sponsored by Collins in the Senate, authorizes nearly $3 billion on conservation projects, outdoor recreation and maintenance of national parks and other public lands.

Collins said she also appreciated Haaland’s support on issues important to Maine, such as Acadia National Park, “as well as her deep knowledge of tribal issues, which has earned her the support of tribes across the country, including those in Maine.''

The Senate energy panel is set to vote on Haaland's nomination Thursday. Several Republicans, including Wyoming Sen. John Barrasso, the top GOP senator on energy, oppose Haaland, saying her opposition to fracking, the Keystone XL oil pipeline and other issues made her unfit to serve in a role in which she will oversee energy development on vast swaths of federal lands, mostly in the West, as well as offshore drilling in the Gulf of Mexico and Alaska.

Barrasso said a moratorium imposed by Biden on oil and gas leases on federal lands “is taking a sledgehammer to Western states’ economies.″ The moratorium, which Haaland supports, could cost thousands of jobs in West, Barrasso said.

Drake Batherson had two goals and ...