Dr. Bernard Lafayette Jr. was a young activist emerging from the 1961 sit-ins and Freedom Rides that fought for Black civil rights and an end to racial segregation when he received his next assignment.

It was one that would help change the course of American history.

“I looked on the blackboard and they had an ’X’ through Selma,” Lafayette, now 80, recalled in an interview with The Associated Press, referring to the Alabama city that would become emblematic of the fight to secure Black voting rights and the 1965 marches that were a turning point in that struggle. 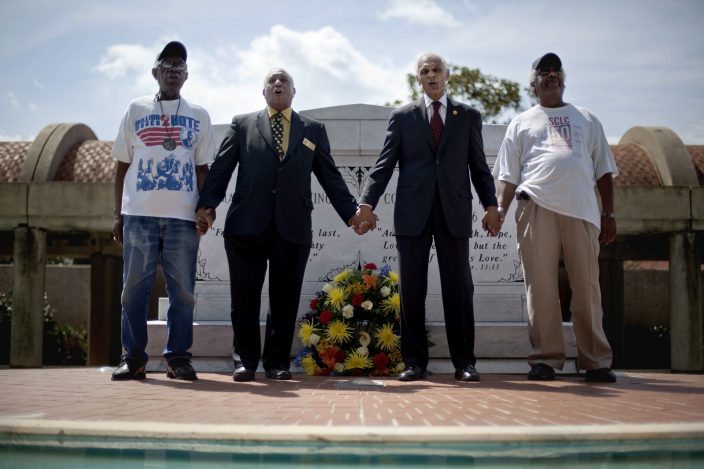 FILE - In this April 4, 2012, file photo, civil rights activists and Southern Christian Leadership Conference members from left, Ralph Worrell, Dr. Bernard Lafayette Jr., C.T. Vivian and Frederick Moore, join hands and sing "We Shall Overcome" at the Atlanta gravesite of the Rev. Martin Luther King Jr., marking the 44th anniversary of his assassination. This Sunday, March 7, 2021, marks the 56th anniversary of the Selma marches and "Bloody Sunday," when more than 500 demonstrators gathered on March 7, 1965, to demand the right to vote and cross Selma's Edmund Pettus Bridge. (AP PhotoDavid Goldman, File)

The Student Nonviolent Coordinating Committee, the youth civil rights arm, had sent two teams to scout out the city.

“Both teams came back and said ‘No, we’re not going to Selma,’" Lafayette said. “And they gave the same reason: ‘The white folks were too mean and the Black folks were too scared.'''

“But I was determined,” said Lafayette. At 22, he was painfully aware of the risk after being badly beaten by a white mob in Montgomery, Alabama, while taking part in Freedom Ride protests there against segregated bus terminals. FILE - In this March 4, 2012, file photo, U.S. Rep. John Lewis, D-Ga., center, talks with those gathered on the historic Edmund Pettus Bridge during the 19th annual reenactment of the "Bloody Sunday" Selma to Montgomery civil rights march across the bridge in Selma, Ala. The March 7, 2021, Selma Bridge Crossing Jubilee will be the first without the towering presence of Lewis, as well as the Rev. Joseph Lowery, the Rev. C.T. Vivian and attorney Bruce Boynton, who all died in 2020. (AP PhotoKevin Glackmeyer, File)

“I’ll go to Selma,” he recalled saying — words that would place him in the middle of the movement to register Black voters and eventually the 1965 Selma marches.

Sunday marks the 56th anniversary of those marches and “Bloody Sunday,” when more than 500 demonstrators gathered on March 7, 1965, to demand the right to vote and cross Selma’s Edmund Pettus Bridge. They were met by dozens of state troopers and many were severely beaten.

The attack, broadcast on national television, captured the attention of millions and became a symbol of the brutal racism Black Americans endured across the South. Two weeks later, the Rev. Martin Luther King Jr. and thousands of civil rights protesters marched the 49 miles from Selma to the state capital, Montgomery — an event that prompted Congress to eventually pass the Voting Rights Act of 1965. 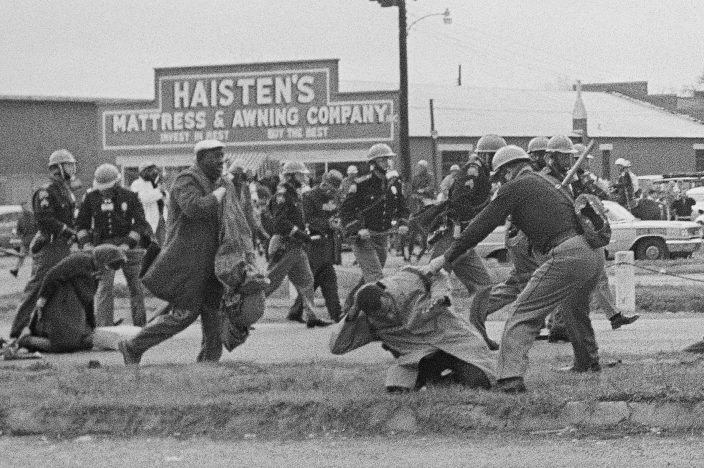 FILE - In this March 7, 1965, file photo, a state trooper swings a billy club at John Lewis, right foreground, chairman of the Student Nonviolent Coordinating Committee, to break up a civil rights voting march in Selma, Ala. The March 7, 2021, Selma Bridge Crossing Jubilee will be the first without the towering presence of Lewis, as well as the Rev. Joseph Lowery, the Rev. C.T. Vivian and attorney Bruce Boynton, who all died in 2020. (AP PhotoFile)

This year's Selma Bridge Crossing Jubilee will be the first without the towering presence of civil rights icons Congressman John Lewis, the Rev. Joseph Lowery, the Rev. C.T. Vivian and attorney Bruce Boynton, who all died in 2020.

It will also be largely virtual because of the coronavirus pandemic, and comes at a time when the nation is still reckoning with the convergence of three crises that have disparately impacted Black Americans — the pandemic, its ensuing economic fallout and the racial injustice movement.

Organizers, activists and civil rights leaders say this year’s event, to be held Friday through Sunday, will honor the memory of civil rights legends and marchers and serve as a rallying cry and reminder that the fight for racial equity must continue. 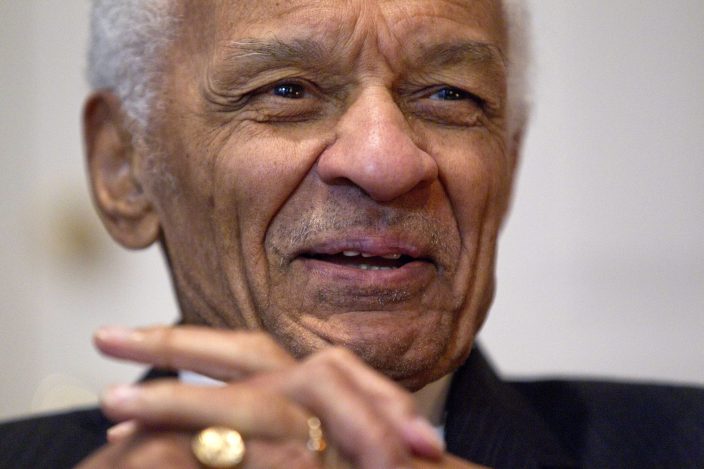 FILE - In this Jan. 4, 2012, file photo, civil rights activist C.T. Vivian sits at his home in Atlanta. This Sunday, March 7, 2021, marks the 56th anniversary of the Selma marches and "Bloody Sunday," when more than 500 demonstrators gathered on March 7, 1965, to demand the right to vote and cross Selma's Edmund Pettus Bridge. The March 7, 2021, Selma Bridge Crossing Jubilee will be the first without the towering presence of John Lewis, as well as the Rev. Joseph Lowery, Vivian and attorney Bruce Boynton, who all died in 2020. (AP PhotoDavid Goldman, File)

“Our young people must continue the movement and you’ve got to keep moving in order to bring about that change,” Lafayette said.

This year’s theme, “Beyond the Bridge: People Power, Political Power, Economic Power," will also provide live workshops and training to help the next generation of organizers, said Drew Glover, the jubilee's principal coordinator.

It will feature performances and events honoring civil rights legends and also the “foot soldiers,” whose names are lesser known. It will culminate in a virtual bridge crossing, featuring local and national leaders. 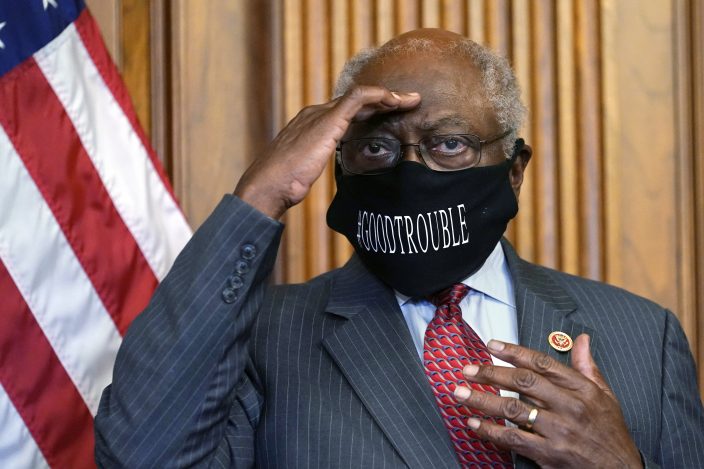 FILE - In this Sept. 17, 2020, file photo, House Majority Whip James Clyburn, of S.C., shields his eyes from a television light during a news conference about COVID-19, on Capitol Hill in Washington. Clyburn, a member of the Selma Bridge Crossing Jubilee's honorary committee, believes one way to honor the memory of Lewis and others is to enact the John Lewis Voting Rights Act, to strengthen protections granted under the Voting Rights Act of 1965 and protect against racial discrimination and vote suppression. (AP PhotoJacquelyn Martin, File)

“The issues that we’re dealing with today, with voter suppression, white supremacy, intimidation, the Capitol insurrection — these are all issues that our ancestors have been organizing for, for generations," Glover said.

“We're binding that connection between the struggles of 1965 and before, and where we are now in 2021, so that we can activate the next generation of people to pass that torch.”

House Majority Whip Jim Clyburn, a member of the jubilee’s honorary committee, believes one way to honor that struggle is to enact the John Lewis Voting Rights Advancement Act, to strengthen protections granted under the Voting Rights Act of 1965 and protect against racial discrimination and voter suppression. 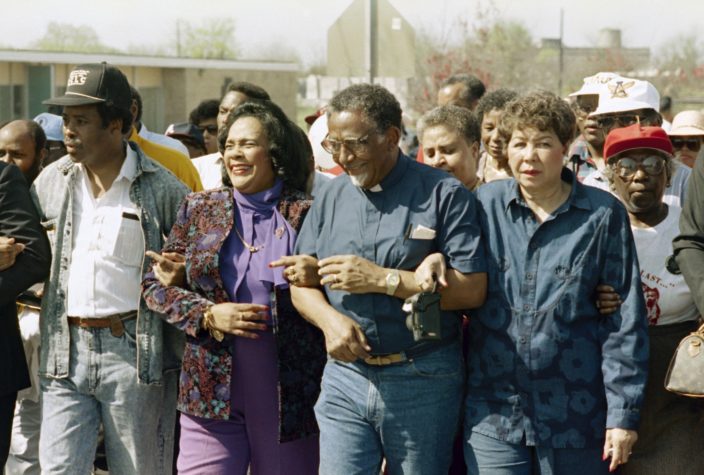 FILE - In this March 4, 1990, file photo, Coretta Scott King walks arm-in-arm with Southern Christian Leadership Conference President Joseph Lowery, second from right, in Selma, Ala., as marchers begin the final leg of their trek to the Alabama Capitol. The March 7, 2021, Selma Bridge Crossing Jubilee will be the first without the towering presence of John Lewis, as well as Lowery, the Rev. C.T. Vivian and attorney Bruce Boynton, who all died in 2020. (AP PhotoDave Martin, File)

Separately, the House of Representatives is poised to vote on sweeping voting and ethics legislation, House Resolution 1, that if enacted would usher in the biggest overhaul of U.S. elections law in a generation.

It would touch virtually every aspect of the electoral process — striking down hurdles to voting erected in the name of election security, curbing partisan gerrymandering and curtailing the influence of big money in politics.

Acting on former President Donald Trump’s repeated false claims of a stolen election, dozens of Republican-controlled state legislatures are pushing bills that would make it more difficult to vote. Democrats and activists argue this would disproportionately impact voters of color and low-income voters. 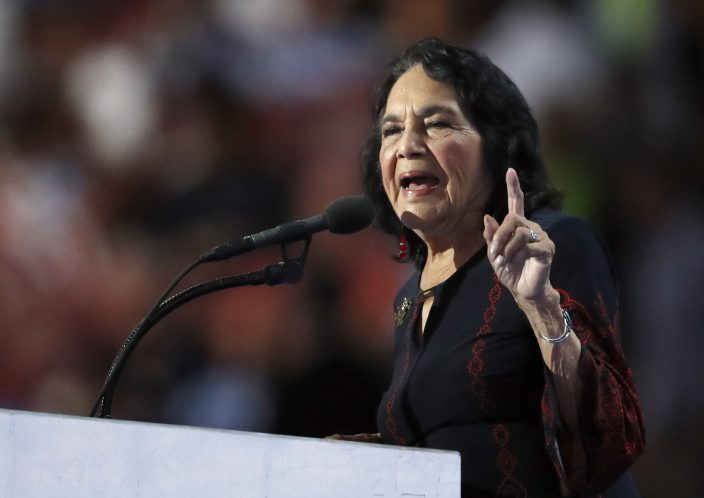 FILE - In this July 28, 2016, file photo, civil rights leader Dolores Huerta speaks during the final day of the Democratic National Convention in Philadelphia. Huerta, a co-founder of the United Farmworkers with Cesar Chavez, is a slated speaker for the 2021 Selma Bridge Crossing Jubilee. (AP PhotoPaul Sancya, File)

“If we do believe in what John Lewis stood for, of what Joe Lowery or C.T. Vivian fought for, then if that’s what we believe, then we will restore the efficacy of their efforts," Clyburn said.

The Selma commemoration is also a way for other people of color and allies to support the civil rights movement. Dolores Huerta, a co-founder of the United Farm Workers with Cesar Chavez, is a slated speaker.

“This is not a once-in-a-while type of work that we have to do; our commitment to social and racial justice has to be one of a lifetime," the 90-year-old Huerta told the AP. 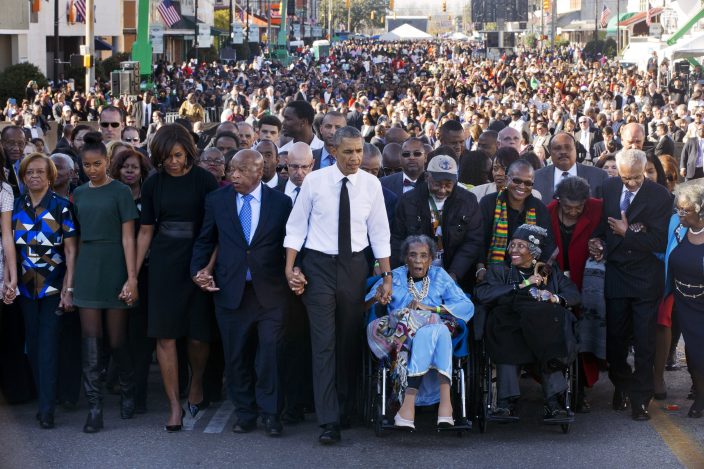 FILE - In this March 7, 2015, file photo, President Barack Obama, center, walks as he holds hands with Amelia Boynton Robinson, who was beaten during "Bloody Sunday," as the first family and others including Rep. John Lewis, D-Ga., left of Obama, walk across the Edmund Pettus Bridge in Selma, Ala., for the 50th anniversary of "Bloody Sunday," a landmark event of the civil rights movement. From front left are Marian Robinson, Sasha Obama, first lady Michelle Obama, Obama, Boynton and Adelaide Sanford, also in wheelchair. (AP PhotoJacquelyn Martin, File)

"The Pettus Bridge is a very symbolic moment in time and history and shows us that we have to continue to march and not give up — even when we’re beaten or knocked down.”

Chase Iron Eyes, lead counsel for the Lakota People’s Law Project and a key organizer for the Dakota Access and Keystone XL pipelines, will deliver a special invocation, a reminder that the civil rights struggle is interwoven among people of color, including Indigenous communities.

“It’s just been metastasizing in this country, it’s never gone away,” Iron Eyes said, of the nation's legacy of racism and oppression.

“This country was founded on genocide and slavery. We call it the civil rights struggle but it’s also just a struggle to draft a new social contract, to change the way that we live with each other in this country.”

The Rev. William Barber II, co-chair of the Poor People’s Campaign, a multiracial coalition working to lift millions out of poverty and oppression, notes the intersection of the fight for voting rights and economic justice.

“We have to talk about what is our Selma today. And today our Selma is to expand voting rights, restore the Voting Rights Act fully, raise the minimum wage to a living wage and pass universal health care for all," Barber said.

“Every generation has it's Selma and these are the things that make up our Selma today."