She was offered a chance to get back into her dressing room at the Broadhurst Theatre — home of her musical “Jagged Little Pill” — and to grab anything she needed.

“I went and retrieved a bunch of plants,” she says, laughing. “I knew they won’t survive in a room with no windows and no water.” 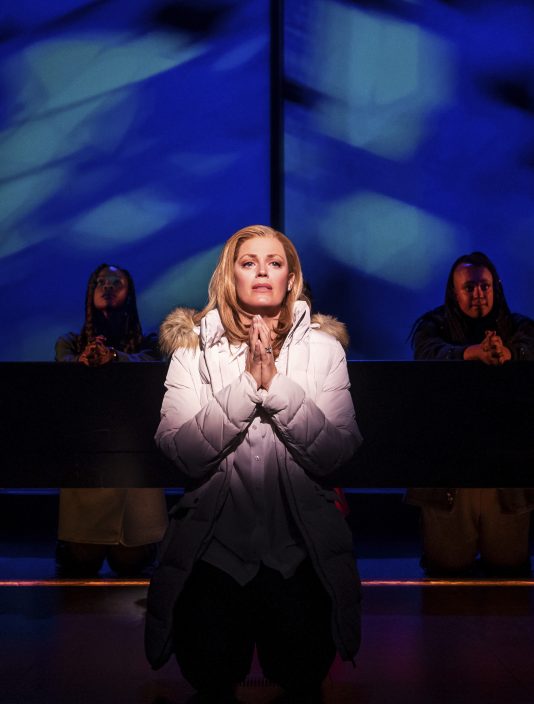 Elizabeth Stanley appears during a performance of "Jagged Little Pill" in New York. Stanley earned her first Tony Award nomination playing the mom of a Connecticut family spiraling out of control in the musical set to the music of Alanis Morissette's 1995 album of the same name.(Matthew MurphyVivacity Media Group via AP)

That strong nurturing side of Stanley was also clearly evident from the stage before the pandemic closed theaters. She earned her first Tony Award nomination playing the mom of a Connecticut family spiraling out of control in the musical set to the music of Alanis Morissette's 1995 album of the same name.

“In some ways, people didn’t know what to do with me always and I think that’s honestly worked out to my benefit most of the time,” she says. “I didn’t just get stuck playing one singular type of part.”

Eva Price, the three-time Tony Award-winning producer behind “Jagged Little Pill,” says Stanley has put her entire heart and soul into her latest character ever since workshops started.

“She actually created a multi-dimensional, 360-degree, completely layered, contemporary female protagonist in a way that none of us knew we even had on the page or in our minds,” said Price.

Stanley made her Broadway debut in the 2006 revival of “Company” and has had roles in “Cry-Baby,” “Million Dollar Quartet” and “On the Town.” A Tony nomination this time is welcome, indeed.

“It’s a dream I’ve had for the whole time I’ve been performing and pursuing a career in the performing arts," she says. "So I feel like whatever crazy year it came in, I’ll take it.”

The musical is about a family confronting drug addiction, sexual assault, struggles with gender identity and transracial adoption. Morissette has told the cast she hopes the musical can be a hopeful beacon.

“She wants us to be a story about healing and connection," says Stanley. "And I think that’s such a beautiful sort of takeaway that she’s infused the piece with and that has always been in her music. I think it’s like this rallying cry for transparency and authenticity.”

Stanley — as the mom, Mary Jane — is the spine of the musical, trying to connect with her workaholic husband and aloof teenage kids. She's also hiding an addiction to Oxycodone developed after being prescribed the opioid following a car accident. During the musical, her character also reveals her own history with sexual assault.

“There’s so many layers to get into that I think it took me a long time to really find all of her,” says Stanley. “In fact, I don’t even think I’m done. That’s one of the reasons I’m anxious to get back to the show — I don’t feel done with this part yet.”

The “Jagged Little Pill” musical is so rooted in contemporary issues facing America that she believes the discussions and marches over racial justice will find voice whenever Broadway restarts.

“I think it will influence our interpretation of it as a cast, but it will also influence the audience and how they will see that,” she says. "Going to see a piece of theater allows us to receive a message and feel it in a more palatable way than watching a three-hour news cycle about something.”

During the past year, Stanley has been part of “Jagged Little Pill” online concerts and appearances. She also went through a series of crafting phases — baking, sewing and tie-dying. She made new throw pillows for her couch.

COVID-19 ruined what was to be one of her happiest days: her wedding. Engaged in January 2020 to actor and teacher Charlie Murphy, the couple were supposed to tie the knot in September. They even put down — and lost — a security deposit at a venue.

Now they're rethinking what they really want when COVID-19 releases its grip on the city. The original idea was to have an intimate affair with just family and a few close friends.

“Now I really want to party with a lot of people,” she says, laughing. “Now I need everyone there that I haven’t been able to see, and I’m surrounded by all of my friends and we’re just being crazy.”