Washington will not have cheerleaders for the first time since the NFL’s longest-running cheerleading team was founded in 1962, with a coed dance team taking its place.

The move is part of the organization's rebranding effort and not related to a confidential settlement reached with members of the 2008 and 2010 cheerleading teams. Lawyers for the team and those cheerleaders told The Associated Press last month that “the matter has been resolved” but would not say when the settlement was reached.

Former Laker Girl manager Petra Pope was hired Wednesday as an adviser to use her three-plus decades of NBA experience to revamp the group. 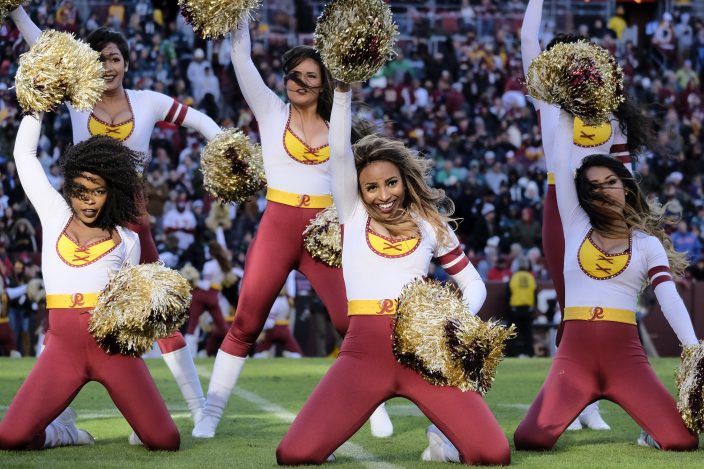 FILE - Then-Washington Redskins cheerleaders perform during an NFL football game against the Philadelphia Eagles in Landover, Md., in this Sunday, Dec. 15, 2019, file photo. The Washington Football Team will not have cheerleaders for the 2021 season as part of an organizational rebranding. Washington hired Petra Pope, who managed the "Laker Girls" and brings three decades of NBA experience as an adviser to take on the task of reinventing the group.(AP PhotoMark Tenally, File)

"I’ve been asked to create a more modern entertainment team that is inclusive and diverse," Pope said in a phone interview. “We just want to follow that mode of being more modern and a more modern franchise. Change is difficult, but I do feel that the fans will love what we bring to the table.”

The “First Ladies of Football” program was put on pause after last season unrelated to allegations of team employees making inappropriate videos from calendar photo shoots of previous members in prior years. Washington on Monday made Joey Colby-Begovich vice president of gameday experience, and Pope will be in charge of forming and naming the new dance team.

The contracts of previous members of the cheerleading team expired, Pope confirmed, though she said they're able to try out for the 2021 group “as long as they have that athletic skillset. I have no idea who the former dancers were, so I don’t know them, so everyone’s welcome to audition.”

Pope said she's convinced owner Dan Snyder and wife Tanya “are committed to bringing this team to a more modern level.” Snyder vowed last summer to change the culture of the team in light of allegations of workplace sexual harassment made by former employees, which prompted an independent investigation that the NFL took over.

In his comments at the Super Bowl, NFL Commissioner Roger Goodell said, “The Washington football club has made a lot of changes already.” That included the hiring of Jason Wright as team president.

This is another change, which Pope said is expected to be in place for next season. Wright has said he expects “Washington Football Team” to continue for 2021 with a new, permanent name to be ready in 2022.

Pope, who worked 14 years for the NBA's New York Knicks in addition to her Los Angeles Lakers experience, said she's the “new kid on the block” in the big picture of the name change and will concentrate on the dancer element of the rebrand.

“My focus is really just reinventing this team,” she said. “My goal is to create this team, reinvent this team and make it more modern.”