Lebanon’s president ordered the central bank governor on Wednesday to open an investigation into currency speculation, after the Lebanese pound plunged to record lows on the black market this week, leading to protests in the stricken country.

The request by President Michel Aoun came after the country’s banks were required to raise their capital holdings by Feb. 28, and local media reported that some had to scramble to get hard currency from the black market, sending demand for it — and its prices — surging.

While officialy, the U.S. dollar costs only 1,520 Lebanese pounds, the black market price was around 9,900 pounds on Wednesday — a day after briefly hitting a record high of 10,000. Just a few months earlier dollars could be bought at a rate of some 7,000 pounds. 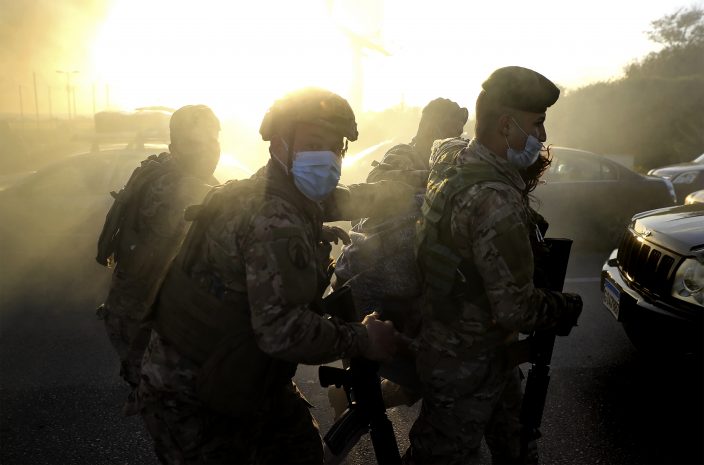 Lebanese soldiers arrest a protester who was burning tires to block a highway that leads to Beirut's international airport, in Beirut, Lebanon, Tuesday, March 2, 2021. Scattered protests broke out in different parts of Lebanon Tuesday after the Lebanese pound hit a record low against the dollar on the black market, a sign of the country's multiple crises deepening with no prospects for a new Cabinet in the near future. (AP PhotoHussein Malla)

In a statement released by his office after meeeting central bank governor Riad Salameh, Aoun said if it turns out that the crash was because of speculators, they should face justice. Enraged protesters, angry over the higher costs of dollar denominated goods, have blocked roads and highways with burning tires across the country.

Lebanon’s banking association denied it was responsible for the situation, blaming instead a lingering political implasse, pileups of unpaid state contracts, and houshold dollar hoarding.

Bickering between Lebanon's political rivals has left the country in a stalemate for months, only worsening the economic disaster sparked by a debt crisis and soverign default last year. Disagreements between Aoun and Prime Minister-designate Saad Hariri have delayed the formation of the government for more than four months. 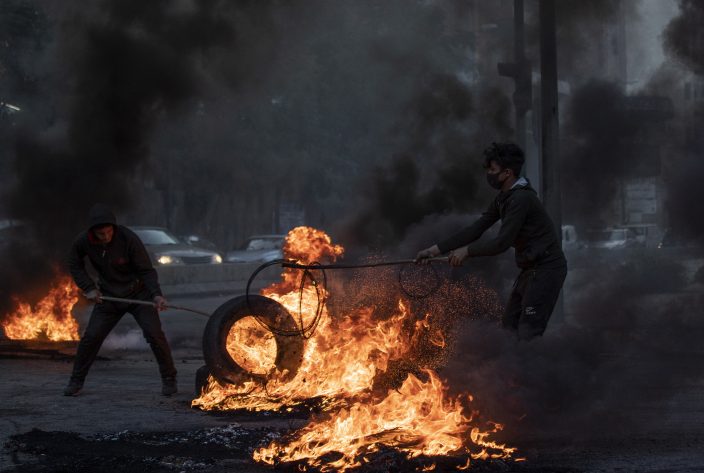 An anti-government protesters burns tires to block a road, during a protest in Beirut, Lebanon, Tuesday, March 2, 2021. Scattered protests broke out in different parts of Lebanon Tuesday after the Lebanese pound hit a record low against the dollar on the black market, a sign of the country's multiple crises deepening with no prospects for a new Cabinet in the near future. (AP PhotoHassan Ammar)

Lebanon has been hit by one crisis after another, with widespread protests against the country’s corrupt political class breaking out in October 2019. That has been compounded by the coronavirus pandemic and a massive blast in Beirut’s port last August that decimated the facility.

The country desparately needs foreign currency, but international donors want major anti-corruption reforms first, lest the funds disappear into a notorious state sector sinkhole that has brought the nation to the brink of bankruptcy.

The crisis has driven nearly half the population of the small country of 6 million into poverty. Over 1 million refugees from Syria live in Lebanon.

IMF calls on Lebanese to unite behind government reform plan

Lebanese major retailers to shut down amid economic crisis

Protests as currency slides, price of bread rises in Lebanon