The Kremlin on Wednesday shrugged off new Western sanctions over the poisoning and arrest of Russian opposition leader Alexei Navalny as unfounded and pointless — but warned that Moscow will retaliate.

U.S. President Joe Biden's administration sanctioned seven Russian officials on Tuesday, along with more than a dozen government entities, over the nerve-agent attack on Navalny and his subsequent jailing. It coordinated the move with the European Union, which expanded its own sanctions Tuesday.

Commenting on the U.S. and the EU decisions, Kremlin spokesman Dmitry Peskov said the sanctions against top Russian officials that include a freeze on their bank accounts duplicate Russia's own law that bans them from having financial and other assets abroad. 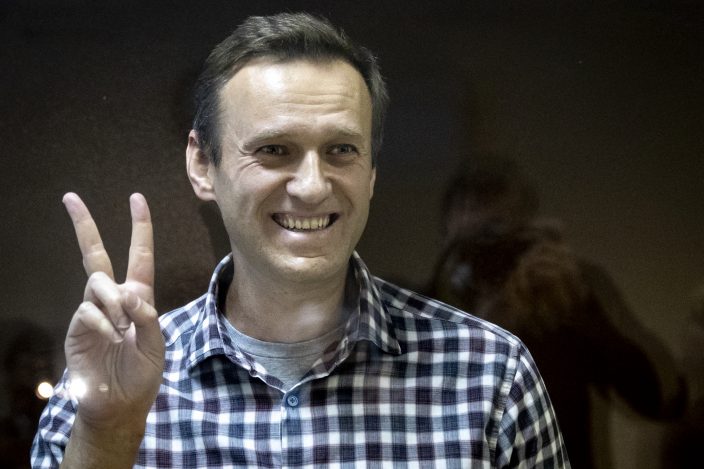 FILE - In this Saturday, Feb. 20, 2021 file photo, Russian opposition leader Alexei Navalny gestures as he stands behind a grass of the cage in the Babuskinsky District Court in Moscow, Russia. Russian opposition leader Alexey Navalny was transported to a prison 100km away from Moscow. Navalny was taken to a prison in Pokrov city after Moscow city court rejected appeal against his prison sentence on Saturday, Feb. 27, 2021. (AP PhotoAlexander Zemlianichenko, File)

“These people don't make foreign trips anyway and they don't have the right to open accounts in foreign banks or have any other foreign assets,” Peskov said in a conference call with reporters.

At the same time, he added that the U.S. and EU restrictions “represent meddling in Russia's internal affairs” and are “absolutely unacceptable, inflicting significant damage to the already poor ties."

Peskov warned that Russia will now choose a “response that would best serve our own interests,” adding that the relevant state agencies would draft their proposals and submit them to the Kremlin.

“The principle of reciprocity in relations between states can't be abandoned,” he said.

Navalny, the most prominent critic of Russian President Vladimir Putin, fell sick on Aug. 20 during a domestic flight in Russia and was flown while still in a coma to Berlin for treatment two days later. Labs in Germany, France and Sweden, and tests by the Organization for the Prohibition of Chemical Weapons, established that he was exposed to a Soviet-era Novichok nerve agent. Russian authorities have denied any involvement in the poisoning.

Navalny was arrested on Jan. 17 upon returning from Germany, where he spent five months recovering from the poisoning. His arrest triggered massive protests, to which the Russian authorities responded with a sweeping crackdown.

Last month, Navalny was sentenced to 2 1/2 years in prison for violating the terms of his probation while convalescing in Germany. The sentence stems from a 2014 embezzlement conviction that Navalny has rejected as fabricated — and which the European Court of Human Rights has ruled to be unlawful.

Last week, Navalny was sent to serve his sentence to a prison outside Moscow, despite the European Court of Human Rights' demand for his release which cited concerns for his safety.

In a statement put on his Instagram account Wednesday, Navalny said he was sent to a prison in Kolchugino, a town 130 kilometers (about 80 miles) east of Moscow. He added that he wasn't getting any letters or given access to a prison library and joked about his fellow inmates offering competing advice on how to dry bread using heating radiators in their cell.

Navalny's lawyer, Vadim Kobzev, said on Twitter that he was being held in a quarantine cell with two other inmates.