Miami Marlins outfield prospect Monte Harrison says he surprised himself when he made his major league debut last year. 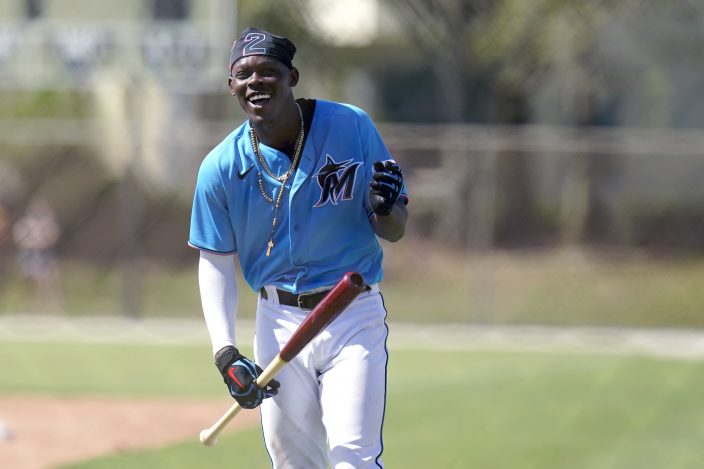 FILE - Miami Marlins' Jazz Chisholm laughs during spring training baseball practice in Jupiter, Fla., in this Friday, Feb. 26, 2021, file photo. For the Jeter regime, instant success hasn't happened at all. Four of the Marlins' top 12 prospects made their MLB debuts last year, and none batted above .170.(AP PhotoJeff Roberson)

Harrison's experience wasn't isolated in Miami last season; several other Marlins prospects also scuffled in their first crack at the majors. In fact, while the farm system rebuilt under CEO Derek Jeter brims with young talent, it has yet to produce a hitter who busts out in the majors.

With pitching it's different. The Marlins have stockpiled young arms so successfully their rotation is expected to be the strength of this year's team, with no starter older than 26. 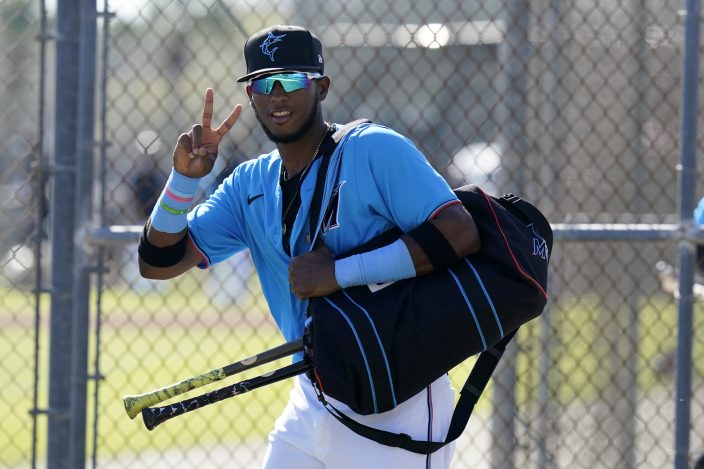 FILE - Miami Marlins' Lewin Diaz jogs between fields during spring training baseball practice in Jupiter, Fla., in this Friday, Feb. 26, 2021, file photo. For the Jeter regime, instant success hasn't happened at all. Four of the Marlins' top 12 prospects made their MLB debuts last year, and none batted above .170. (AP PhotoJeff Roberson, File)

“There are a few young guys who don’t struggle; the majority do,” Marlins manager Don Mattingly said Wednesday. “There are very few Sotos, Griffey Jrs. and Acunas of the world who are instantly stars. It doesn’t happen that often.”

For the Jeter regime, instant success hasn't happened at all. Four of the Marlins' top 12 prospects made their MLB debuts last year, and none batted above .170. 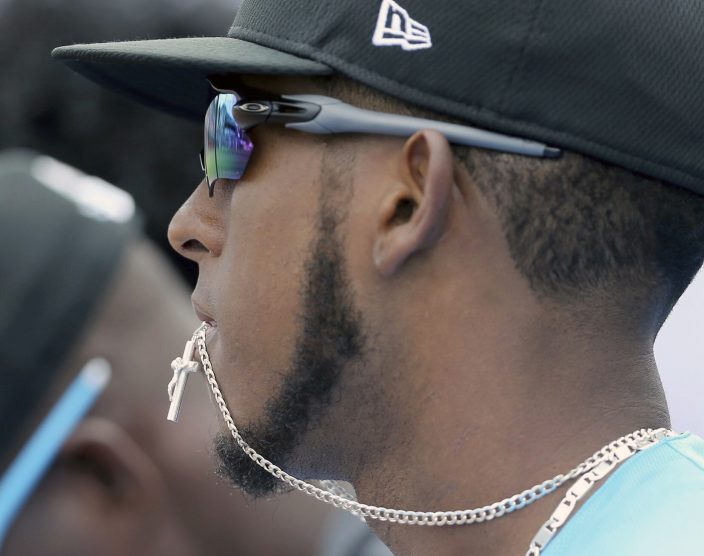 FILE - Miami Marlins' Lewin Diaz is shown during a baseball game against the St Louis Cardinals at Roger Dean Chevrolet Stadium in Jupiter, Fla., in this Feb. 24, 2020, file photo. “There are a few young guys who don’t struggle; the majority do,” Marlins manager Don Mattingly said Wednesday, March 3, 2021,. “There are very few Sotos, Griffey Jrs. and Acunas of the world who are instantly stars. It doesn’t happen that often.” Top prospect Lewin Diaz went 6 for 39 with 12 strikeouts in his MLB debut. (Charles Trainor Jr. Miami Herald via AP, File)

Other heralded youngsters, including second baseman Isan Díaz and outfielder Magneuris Sierra, also have been unable to win a starting job.

Outfielder Lewis Brinson feels their pain. A prospect acquired in the Christian Yelich trade with Milwaukee, Brinson has a .189 career average in 761 at-bats, although he did show progress in 2020 and might have a role on this year's team.

His advice for scuffling young hitters?

“Embrace that struggle,” Brinson said. "Embrace getting slapped, getting humbled a little bit.

“We’ve killed it in the minors; when you get to the big leagues it’s a different ballgame. You can't succeed without failing sometimes. You’ve got to take your lumps.”

Mattingly said he doesn't believed the Marlins have been calling up youngsters too soon. Instead, he thinks the game has changed since 1984, when he won the American League batting title at age 23 by hitting .343.

“There is a bigger separation now between Triple-A and the big leagues,” Mattingly said. "It almost always takes that getting slapped, as Lew would say, and then going back and working on your game, and the next time it’s usually a little better.

“We’re seeing it with Lew. He's making strides, and it has taken a little bit. Hopefully it’s not going to take two or three years with guys, but sometimes that’s what it takes.”

Or, as Mattingly noted, success may never come. But that's where the Marlins' depth of young talent helps their chances of building on last year's surprising run to their first playoff berth since 2003.

The Marlins remain high on their 2020 rookie class, and even if the entire group flops, there are more young prospects on the way. That includes outfielders JJ Bleday, Kameron Misner, Peyton Burdick and Connor Scott, and shortstop Jose Devers.

The improved depth of the farm system has been evident during the first week of spring training games, Mattingly said.

“You see it clear as day,” he said. “There is just no doubt our quality has been up, and you see that depth coming.”

Harrison, for one, embraces getting slapped last year. A dynamic player and personality, he failed to make the roster out of camp last summer, and saw only spot duty after later joining the Marlins.

“I think the best thing that ever happened to me was in that time period where I got sent down and called back up and I had to sit on the bench,” Harrison said. "The best of Monte will come out. I can't wait for the fans of Miami to see that, and the world.”

The Marlins remain confident, too, that they won't continue to strike out with their young hitters.