You've got to love a movie that credits its dogs before it does its executive producers.

“The Truffle Hunters," Michael Dweck and Gregory Kershaw’s exquisitely charming documentary about old Italian men who scavenge truffles and the dogs they're bound to, lists the canines with the appropriate respect in the end credits. Birba. Biri. Charlie. Fiona. Nina. Titina. Yari. These are some of the stars of “Truffle Hunters," a profoundly lovely movie that delights in the noble scavengers of a dog-eat-dog world.

“The Truffle Hunters,” which is shortlisted for best documentary at the Academy Awards and which Sony Pictures Classics will release in theaters Friday, is set in the northern Italy forests of Piedmont. Dweck and Kershaw, both cinematographers, film the truffle hunters — aging, sweet men practicing an ancient and secretive tradition — in painterly, pointillistic tableaux as they walk through autumnal forests, foraging with their dogs. They seep into the landscape. 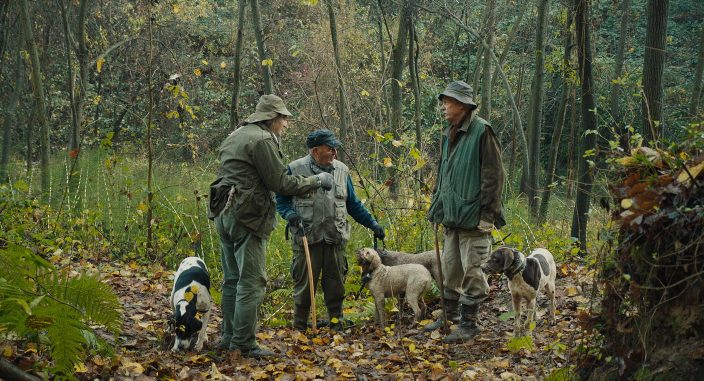 The film, scored by composer Ed Cortes with retro Italian pop mixed in, conjures an otherworldly enchantment. In between backwoods trips where their dogs smell their way to the high-priced delicacies, the hunters live humbly in old country homes. Our main characters are never explicitly introduced, but we're drawn intimately into their world, as if we just passed through a magical portal. Aurelio, 84, dines with his companion, Birba, sitting on the table. Carlo, 88, never seems to stop smiling, especially when he manages to get past his wife (who sternly believes him too old to truffle hunt at night) and slip into the woods with his dog, Titina. The younger, long-haired Sergio, a kindly but passionate soul, bathes with his pups — Pepe and Fiona — in a pink-tiled tub. This, surely, is a gentle realm every bit as bewitching as Narnia.

But the hunters' earthy endeavor isn't as simple as it seems. Their way of life is a dying one. The rare white Alba truffle is increasingly hard to find because of effects on the soil connected to climate change. The hunters are often pressed for their secrets. “If tomorrow something happens, your wisdom would be lost," one man urges Aurelio. So sought-after are the truffles that their dogs are perpetually at risk of being poisoned by competitors. Sergio, terrified of losing his, pounds on his drums for catharsis. Another hunter, intent on putting something down, hammers furiously at his typewriter. “Dogs are innocent,” he writes.

The sense that the hunters — who are really in it for the dogs more than money or anything else — are, like their four-legged friends, innocents in a corrupt world only expands when the filmmakers follow the truffle food chain. Haggling over prices by headlight, the hunters seem always lowballed by a well-dressed buyer. Higher up, still, are the Michelin-starred restaurants and auction houses that feast on the hunters' finds. This commercial world, miles removed from the muddy forests of Piedmont, is seen in “The Truffle Hunters” like an antiseptic, colorless modern life that has lost the taste of the simple and eternal. 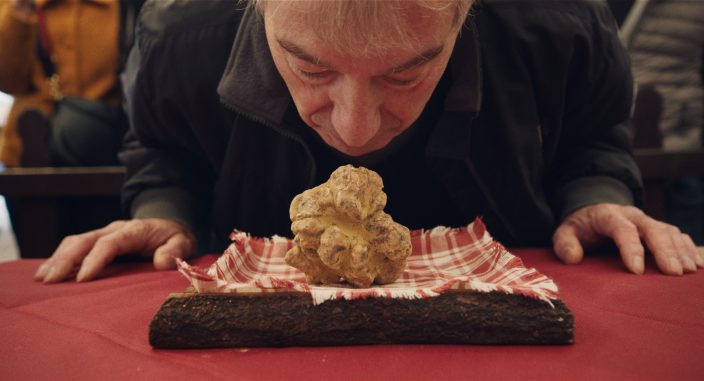 Wonder and whimsy is back in the forest. “The Truffle Hunters” — surely among the greatest dog movies — even wryly occasionally shifts to a dog’s point of view. We see — via dog cam — like one of the hunters’ dogs when he's let out of the car and runs down a path, panting.

Just as last year’s beekeeping beauty “Honeyland,” “The Truffle Hunters” is a richly allegorical documentary of a vanishing agricultural pastime. The truffles, weighed and sniffed at market, are delicacies. But the finer things rhapsodized here are not expensive rarities. What's worth savoring is natural splendor, the charms of tradition, and, above all, a good dog. Those things aren't delicacies, but they're fragile just the same.

“The Truffle Hunters,” a Sony Pictures Classics release, is rated PG-13 by the Motion Picture Association of America for some language. Running time: 84 minutes. Four stars out of four.