It began like any other Sunday in the Our Lady of Salvation Church in Baghdad for worshipper Louis Climis. That day nearly 11 years ago would end with blood-stained pews, anguish and lives lost.

Six al-Qaeda-linked militants stormed and seized the church, killing dozens inside. At the time, the Oct. 31, 2010 attack was the bloodiest in a drumbeat of violence that Iraq’s Christians suffered during the brutal sectarian warfare following the 2003 U.S. invasion. More than a decade later, it still stands as perhaps the deadliest single attack against the community.

The carnage prompted many Christians to flee Iraq and deepened the mistrust between the community and its Muslim neighbors, a chasm that endures to this day. 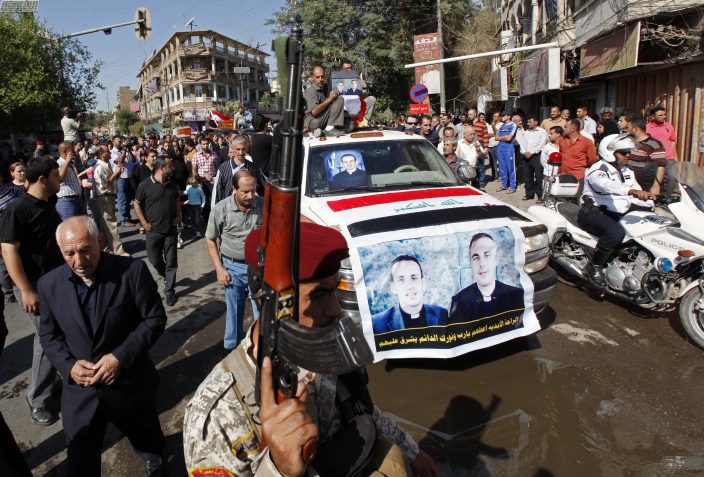 File - In this Tuesday, Nov. 2, 2010 file photo, the coffins of two slain priests and their parishioners arrive at a funeral mass in Baghdad, Iraq. The victims were killed Sunday when gunmen stormed a church during mass and took the entire congregation hostage. The attack, claimed by an al-Qaida-linked organization, was the deadliest recorded against Iraq's Christians since the 2003 U.S.-led invasion unleashed a wave of violence against them. The text on the banner, in Arabic, reads "Please, God, give him eternal rest and make your light shine on him." (AP PhotoHadi Mizban, File)

Some are now counting on a much anticipated visit to the church by Pope Francis on Friday to help mend the wounds. Our Lady of Salvation, which belongs to the Syriac Catholic Church, is one of the pontiff’s first stops in a historic visit to Iraq that Christians hope will secure their tenuous place in the country.

“The pope’s visit is hope for us, that he will talk with Iraqi officials to tell them to stop the violence, stop the armed groups and protect minorities,” Climis said.

On that fateful day in 2010, Climis, then 55, was a youth leader at the church. He had arrived just in time for weekly Mass with his 18-year-old son, Radi. His wife and other children stayed home to supervise kitchen repairs. For this, Climis would later be thankful. 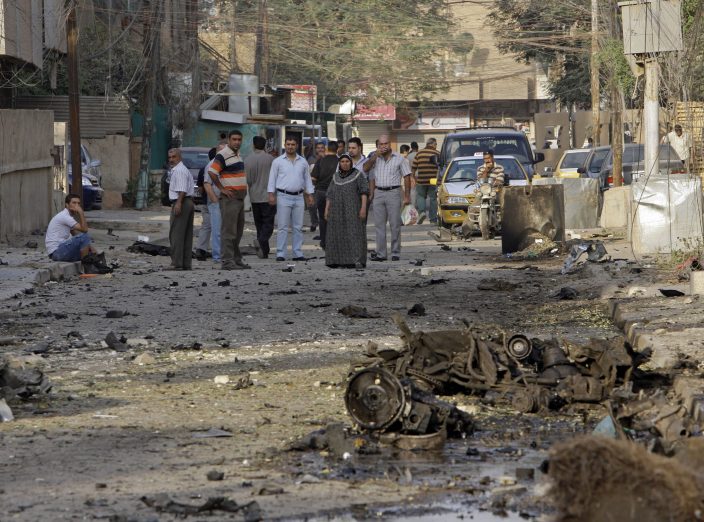 File - In this Monday Nov. 1, 2010 file photo, Iraqis inspect the scene of a car bomb attack in front of a Our Lady of Salvation Church in Baghdad, in Baghdad, Iraq. Islamic militants held around 120 Iraqi Christians hostage for nearly four hours in a church Sunday before security forces stormed the building and freed them, ending a standoff that left dozens of people dead, U.S. and Iraqi officials said. (AP PhotoKhalid Mohammed, File)

The lofty church interiors resounded with the voice of Father Thair reading a Bible passage. He would never finish. It was right then that the first suicide bomber detonated his explosive-laden vest.

The blast threw Climis to the floor. Stunned, his eyes strained to focus on the unfolding chaos – smoke, debris and screams. Worshippers lay lifeless.

He counted four gunmen. Under the icon of the Virgin Mary, one began singing the adhan, the Islamic call to prayer. 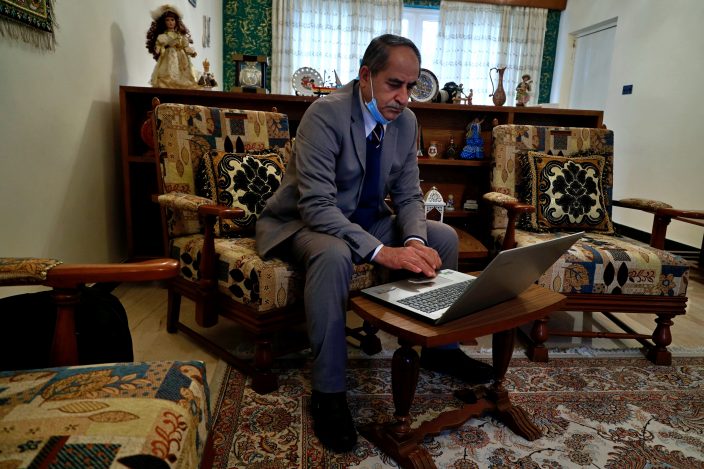 Louis Clemis reviews photos of the storming of the church on his laptop during an interview with The Associated Press in Baghdad, Iraq, Sunday, Feb. 17, 2021. Clemis was a church youth leader, attending Mass at Our Lady of Salvation Church in Baghdad in October 2010 when six extremists stormed in and attacked worshipers. Dozens were killed in the massacre that changed Clemis' life forever. Still suffering from hearing loss 11 years later, he says the harrowing day planted the seeds of Christian mistrust of Muslims. Pope Francis' planned visit to the church brings hope that Iraq's Christians can finally live in peace with their neighbors. (AP PhotoHadi Mizban)

Quickly, Climis grabbed his son and ran toward the sacristy room, where church furnishings and records were stored. As people scrambled for cover, he beckoned them inside. With over 40 people in the room, he shut the wooden doors and slid a steel rod to bar the handles.

“But it was very thin… any one of the four terrorists could enter the room and kill us easily,” he said, recalling the scene from his Baghdad home.

Climis and his son lay frozen on the floor, listening to the horrors on the other side of the door. Shrieks were followed by bullets. Children cried out. Explosion after explosion shook the walls.

One gunman told a mother to quiet her wailing infant. When she was unable, Climis heard the pop of a bullet. The screaming ceased.

He could hear Father Wassim, his friend, try and reason with the men. He too was shot and killed.

From a small hole in the door he eyed another gunman, standing just a few feet away.

How young he was, he thought in that moment.

A grenade was tossed so close to the sacristy that the water cooler burst, flooding the room and those huddled inside. Shivering, Climis noticed his ears were ringing.

Eleven years on, he is still deaf in his right ear.

Desperate, he called a friend who worked in the Baghdad Operations Command. Half an hour and help would come, the friend told him.

Four panic-stricken hours later, the lights suddenly went off. Climis braced for the worst. Another explosion followed, louder than any before. Then the rush of footsteps and volley of firearms.

Iraq’s elite Counter-Terrorism Service stormed the church at 9 p.m. But Climis didn’t let anyone leave the room – they had no idea what was going on.

After a minute, someone knocked on the door, and a voice came: “I am your brother from the CTS, and everyone will leave this church safely.”

Climis had to see his beloved church one last time. The CTS officer told him no, it was very dangerous, there could be IEDs.

But he dared to look anyway.

“I don’t wish anyone to see what I saw. Body parts everywhere. I saw one body with just a head, hands and chest, the rest was blown apart.”

Then, his gaze turned up toward the vaulted ceiling.

“There were scraps of human flesh,” he said. “It stayed there for weeks.”

In total, 52 worshippers and police were killed in the attack and the ensuing raid by security forces to free the hostages. The Islamic State of Iraq, an al-Qaida-affiliated group, claimed the attack.

Four years later, a new iteration of the group calling itself the Islamic State in Iraq and Syria would overrun vast swaths of northern Iraq, pushing out entire Christian communities, prompting concerns of more marginalization within the historic Iraqi minority. Later, Shiite militia groups would move in and erect checkpoints provoking fear among those who remained.

Two events that traumatic October night sowed the seeds of distrust for over a decade to come.

As gunmen wreaked havoc inside the church, someone fired shots from the outside through a window into the sacristy. Climis couldn’t see who, but thought they were outsiders supporting the terrorists.

In fact, it was the Federal Police who mistakenly fired during the hours-long standoff. A row later ensued between them and the CTS over the incident, other witnesses said.

The bullets are still lodged in books stacked in the sacristy, Climis said.

The second event still haunts Climis. Why upon arriving to the church, he asks, did the CTS wait and not launch the raid directly.

“They did not enter until they got permission from Iraq’s government,” he said. The waiting cost precious lives.

That day, he said, “the Iraqi government did not do their duty toward (us), an ancient Iraqi community,”

The bloodbath shook Iraq’s Christians to the core. Their exodus had begun after the 2003 U.S. invasion, but increased markedly after the massacre. One by one, many of Climis’ friends and family began leaving, seeing no hope for justice.

With the IS onslaught a few years later, little has changed to improve their lot. Most of Climis’ family hails from the northern Christian town of Qaraqosh but are scattered around the world. He has run out of fingers to count the various countries where his relatives reside.

The pope’s visit to Iraq brings hope that he might be able to not only reconnect Iraq’s Christians to their homeland, but also, talk sense into Iraqi leaders who have so far neglected them, Climis said.

Despite his community shrinking around him, Climis has remained in Iraq with his family. Today he is a deacon in the Our Lady of Salvation Church, which is open and holds regular services, still with security presence outside. The immaculate interiors show no signs of its dark history, but the memory of those terrifying hours is still etched in the minds of its worshippers.

So why did Climis stay?

“Because this is my country,” he said.