CONGRESS-ELECTIONS BILL — House Democrats pass sweeping voting and ethics legislation over unanimous Republican opposition, advancing to the Senate what would be the largest overhaul of the U.S. election law in at least a generation. By Brian Slodysko. SENT: 1,130 words, photos. With CONGRESS-POLICING BILL — With Biden’s backing, Democrats revive bill to overhaul policing; BIDEN-CONGRESS-URGENCY — Eager to act, Biden and Democrats leave Republicans behind. 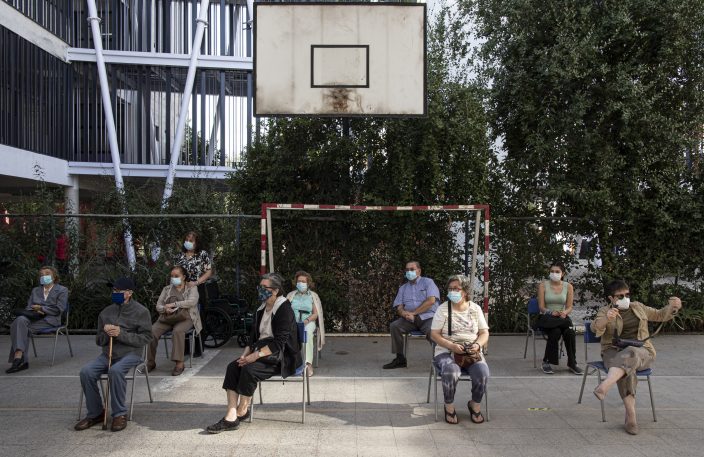 MYANMAR — Myanmar security forces were seen firing slingshots at protesters, chasing them down and even brutally beating an ambulance crew in video showing a dramatic escalation of violence against opponents of last month’s military coup. A U.N. official speaking from Switzerland said 38 people had been killed Wednesday. The increasingly deadly violence could galvanize the international community, which has responded fitfully so far. SENT: 860 words, photos. With MYANMAR-JOURNALIST-CHARGED — Video: Myanmar police hold AP journalist in chokehold; UNITED-NATIONS-MYANMAR-UN-ENVOY — U.N. envoy: Myanmar army is “surprised” at opposition to coup.

CAPITOL BREACH-TAKEAWAYS — Many questions remain unanswered about the failure to prevent the Jan. 6 insurrection at the U.S. Capitol, even after six congressional hearings. Officials in charge of protecting the Capitol, and the people inside it, are pointing fingers at each other. By Mary Clare Jalonick. SENT: 1,360 words, photos. With CAPITOL BREACH-THREAT — Police uncover “possible plot" by militia to breach Capitol.

UNITED STATES-CHINA-CLIMATE — The world’s hopes for curbing climate change hinge on action by two giant nations whose relations are deteriorating. China and the United States both say they are intent on retooling their economies to burn less climate-wrecking coal, oil and gas, but tensions between them threaten their ultimate success. By Christina Larson and Ellen Knickmeyer. SENT: 980 words, photo. 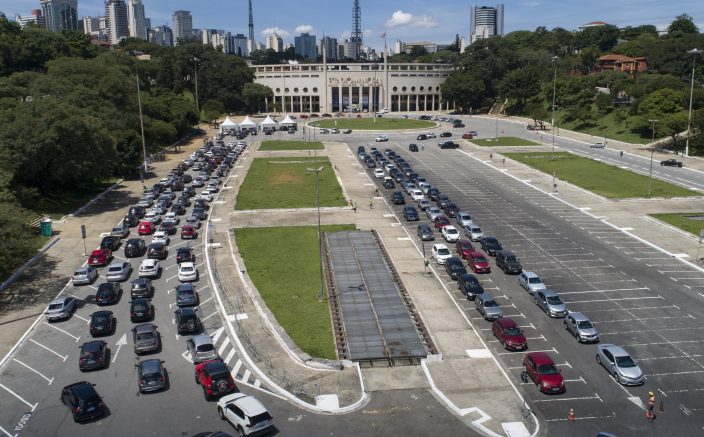 Drivers line up in the Pacaembu soccer stadium parking lot for a drive-thru shot of the Sinovac COVID-19 vaccine during a priority vaccination program for seniors in Sao Paulo, Brazil, Wednesday, March 3, 2021. (AP PhotoAndre Penner)

CUOMO-GILLIBRAND — Kirsten Gillibrand was the first Democratic senator to call for her colleague Al Franken’s resignation as he faced allegations of sexual misconduct in 2017. But Gillibrand and other top Democrats have stopped short of calling on New York’s governor, Democrat Andrew Cuomo, to resign now that he’s accused of offensive behavior. By Will Weissert. SENT: 840 words, photos. With CUOMO-SEXUAL-HARASSMENT — Cuomo addresses harassment claims, vows to stay in office.

IRAQ-POPE-CHURCH MASSACRE SURVIVOR BAGHDAD — Louis Clemis was a church youth leader, attending Mass at Our Lady of Salvation Church in Baghdad in October 2010 when six extremists stormed in and attacked worshippers. Dozens were killed in the massacre that changed Clemis’ life forever. Still suffering from hearing loss 11 years later, he says the harrowing day planted the seeds of Christian mistrust of Muslims. Pope Francis’ planned visit to the church brings hope that Iraq’s Christians can finally live in peace with their neighbors. By Samya Kullab. SENT: 1,170 words, photos. 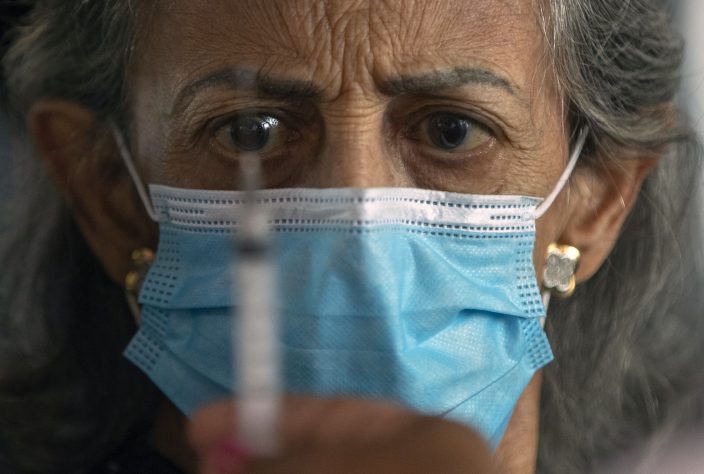 A woman eyes the syringe that will deliver her shot of the Sinovac COVID-19 vaccine at a drive-thru site set up in the Pacaembu soccer stadium parking lot during a priority vaccination program for seniors in Sao Paulo, Brazil, Wednesday, March 3, 2021. (AP PhotoAndre Penner) 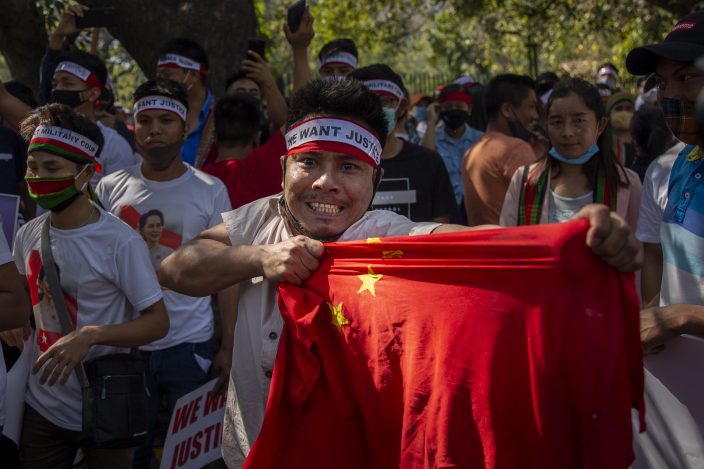 VIRUS-OUTBREAK-CALIFORNIA — California will begin setting aside 40% of all vaccine doses for the state’s most vulnerable neighborhoods in an effort to inoculate people most at risk from the coronavirus and get the state’s economy open more quickly. SENT: 520 words, photos. With VIRUS-OUTBREAK-THE-LATEST.

VIRUS-OUTBREAK-ROYAL-PRIVILEGES — The people of Brussels are craving open spaces in this time of pandemic restrictions, often ending up in overcrowded city parks where social distancing is impossible. Yet one family stands above the fray: The royal family. SENT: 790 words, photos.

VIRUS-OUTBREAK-BRAZIL-ARGENTINA — Sao Paulo and Buenos Aires were a tale of two cities this week, with Brazil’s megalopolis partially shutting down and bracing for possibly the worst of the COVID-19 pandemic, while residents of Argentina’s capital were stepping out to movie-theaters and restaurants. SENT: 800 words, photos.

VIRUS-OUTBREAK-BRITAIN-VACCINES — Regulators in the U.K. and four other countries plan to fast-track the development of modified COVID-19 vaccines to ensure that drugmakers are able to move swiftly in targeting emerging variants of the disease. SENT: 230 words, photo.

VIRUS-OUTBREAK-ONE-GOOD-THING-CARIBBEAN-MEALS — Once a week, for the last 42 weeks, the lucky seniors on Glenda Andrew’s list have been treated to deliveries of delicacies such as jerk pork, curry goat and cow foot soup accompanied by rice and peas, yams and plantains. SENT: 770 words, photos.

VIRUS-OUTBREAK-VIRAL-QUESTIONS-VACCINE-CHILDREN — When children can get COVID-19 vaccines will depend on their age, but some teenagers could be rolling up their sleeves before long. SENT: 290 words, graphic.

VIRUS-OUTBREAK-CAMBODIA — Cambodian Prime Minister Hun Sen was inoculated with a vaccine supplied by the World Health Organization’s COVAX initiative, as a plan to immunize up to two-thirds of the country’s population was on track to be completed by the end of the year. SENT: 380 words, photo.

VIRUS-OUTBREAK-CANADA — A national panel of vaccine experts in Canada recommended that provinces extend the interval between the two doses of a COVID-19 shot to four months to quickly inoculate more people amid a shortage of doses in Canada. SENT: 770 words, photos.

TRANSPORTATION-CHAO-ETHICS — The Transportation Department’s watchdog asked the Justice Department to criminally investigate Elaine Chao late last year over concerns that she misused her office when she was transportation secretary under President Donald Trump but was rebuffed, according to the department’s inspector general. SENT: 550 words, photos.

KELLEN-WINSLOW-II-RAPE — Former NFL player Kellen Winslow II was sentenced to 14 years in prison for multiple rapes and other sexual offenses against five women in Southern California, including one who was homeless when he attacked her in 2018. SENT: 770 words, photos, video.

SKOREA-MIGRANT-WORKERS — Amid a sea of greenhouses near South Korea’s ultra-modern capital, hundreds of migrant workers from across Asia toil isolated and unprotected by labor laws. SENT: 1,200 words, photos.

CHINA-EXPLAINING-THE-CONGRESS — China’s legislature begins its annual meeting this week with economic growth, climate and a crackdown on political opponents in Hong Kong expected to be on the agenda. SENT: 890 words, photos.

PERSIAN-GULF-TENSIONS — Yemen’s Houthi rebels say they attacked a Saudi oil facility in the port city of Jiddah, the latest in a series of cross-border missile and drone strikes the group has claimed against the kingdom amid the grinding war in Yemen. SENT: 530 words, photos.

HONG-KONG-CHINA-POLITICS — A marathon court hearing for 47 democracy activists charged under Hong Kong’s national security law entered its fourth day, as the court deliberates whether the defendants will be granted bail. SENT: 420 words, photos.

SPACEX-STARSHIP-TEST — SpaceX’s futuristic Starship looked like it aced a touchdown, but then exploded on the landing pad with so much force that it was hurled into the air. By Aerospace Writer Marcia Dunn. SENT: 260 words, photos, video.

CHINA-SPACE — China says a cohort of astronauts is training for four crewed missions this year as the country works to complete its first permanent orbiting space station. SENT: 380 words, photos.

JAPAN-FILM-DEMON-SLAYER — The terrifying plight depicted in the swashbuckling animated film, “Demon Slayer: Kimetsu no Yaiba the Movie: Mugen Train,” has struck a chord with pandemic-era Japan, and possibly with the world. SENT: 640 words, photos.