Rookie LaMelo Ball has seized the attention of the NBA this season with his highlight reel passes and a surprising ability to score the basketball, including Charlotte Hornets owner Michael Jordan.

The six-time NBA champion said when the Hornets selected Ball with the No. 3 overall pick they hoped the crafty 6-foot-6 point guard would eventually rise to the level of becoming an All-Star. 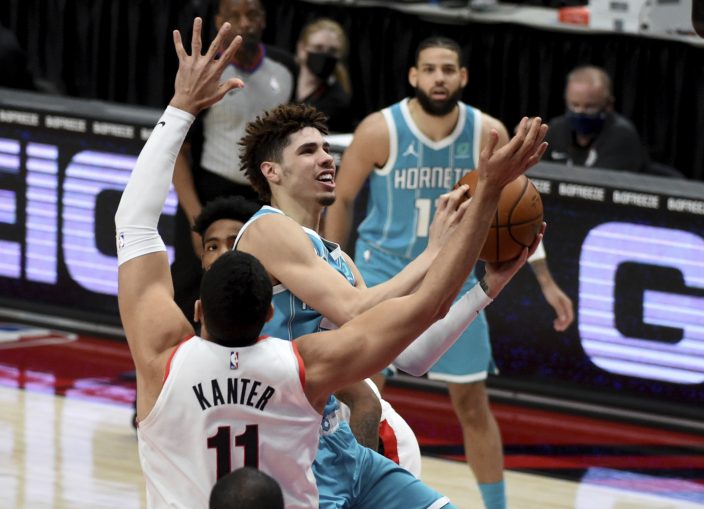 “I think Melo has adjusted to the NBA game better than any of us ever thought this early in his career," Jordan told The Associated Press in an email. “He has exceeded our expectations so far this season.”

More importantly, Ball's game — which includes an array of slick, needle-threading passes — has brought some needed pizzazz and star potential to a franchise mired in obscurity for years. The Hornets are 17-18 entering the All-Star break, just a game behind the fourth place Boston Celtics in the ultra-tight Eastern Conference. 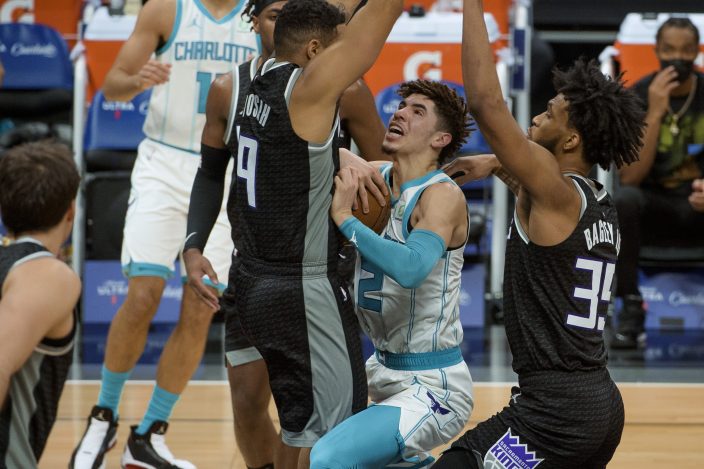 "Right now, with the way things look, he looks like NBA rookie of the year to me," Mavericks coach Rick Carlisle said. "He’s getting it done statistically, their team is winning. He’s got energy, he’s got a vibe, he’s got swagger. If you like watching players that play with flair, he’s right up there.” 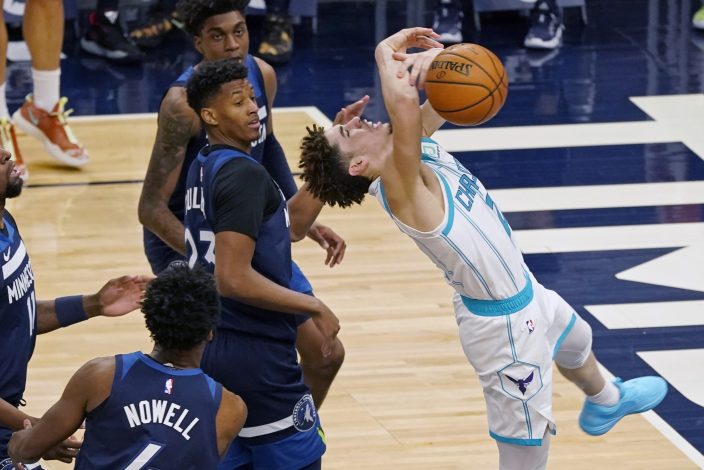 Charlotte Hornets' LaMelo Ball, right, loses the ball after being fouled by Minnesota Timberwolves' Jaylen Nowell (4) in the second half of an NBA basketball game Wednesday, March 3, 2021, in Minneapolis. (AP PhotoJim Mone)

Ball, who grew up watching Penny Hardaway and Jamal Crawford highlights, sees things on the court most players don’t.

He regularly delivers on-time behind-the-back passes leading to transition layups, kick-outs for open 3-pointers and alley-oop lobs for dunks off the pick-and-roll, many of those going to high-flying Miles Bridges, earning the duo the nickname “AirBnB.”

Ball's impact with the Hornets was almost immediate, becoming the youngest player in NBA history to record a triple-double in just his 10th NBA game. Still, it took 20 games before Hornets coach James Borrego inserted him into the starting lineup following an injury to Devonte Graham.

It's unlikely Ball is giving up the position anytime soon.

The 19-year-old has only elevated his game in 15 starts, averaging 20.6 points, 6.6 assists and 6.2 rebounds and has already won NBA rookie of the month twice.

“Me being me, I’m never going to say putting me on the bench was something smart or good to do,” Ball said. “It always feels like when I’m on the court I’m helping. ... But I think one of the reasons is because we didn’t have no summer league, so he probably wanted to ease me into it.”

Said Borrego: “His growth, his fearlessness, his ability to bounce back even when things don’t go his way on one end of the floor … he’s a special kid.”

Before the NBA draft three where were concerns about Ball's unorthodox shooting form with a lower release point than most. He's proven doubters wrong by finding ways to create his own shot while making 37.8% from beyond the arc.

Ball said coaches have tried to change his shooting form just about everywhere he's been, but he's steadfastly resisted.

“I always said, ‘This is how I shoot,'” Ball said. "I’m confident in it. I feel good letting it go. Even coming here (to the Hornets), they low-key tried to adjust it a little but I said, ‘No, this is how I shoot’ and I just stuck with it.”

“I think people wondered at the beginning: was he a good enough shooter?" Hornets general manager Mitch Kupchak said. “I don't think that's a concern.”

That ability to shoot has forced teams to defend Ball behind the arc, making it easier for him to penetrate and score or dish.

“Man, he’s good,” Mitchell said. “I’m not going to lie, I’m very impressed with his playmaking ability, his competitiveness, but his joy. ... He’s very talented; he can do many different things."

Ball said he wants to add some muscle to frame and Jordan added "we believe that he will continue to work and get better as a player.”

Ball's long-term NBA goal is simple, if not lofty: he wants to be a Hall of Famer like Jordan.

Nothing would please Jordan more.

The Hornets haven't been to the playoffs since 2016 and haven't won a playoff series in 19 years.

Like most rookies, Ball needs to continue improve on the defensive end of the court for the Hornets to achieve the consistent success.

“Our goal is to build a consistent winner and have free agents look at our program, just like Gordon (Hayward) did this offseason," Jordan said. "It’s not just about Melo. It’s about our group of young, talented players, our coaching staff and our entire Hornets organization. All of those factors, along with Charlotte being a great city, will make us become a destination.“

Facing the barriers of the Imola t ...

LaVar vs. Jordan: LaMelo says 'we know how it'd turn out'