One of the women who accused New York Gov. Andrew Cuomo of sexually harassing her at the workplace said she was motivated to come forward after another woman contacted her sharing similar allegations and following the Democratic governor's name being floated as a potential nominee for a cabinet position in President Joe Biden's administration.

“I woke up the next day, and the governor was being floated for attorney general, the highest law enforcement position in the U.S.,” former Cuomo aide Lindsey Boylan told Harper's Bazaar in an article published Thursday. “And I didn’t think about it at all … I began tweeting about my experience.”

The 36-year-old Boylan, who worked for Cuomo's team from March 2015 to October 2018, first tweeted about an abusive workplace environment in the administration. 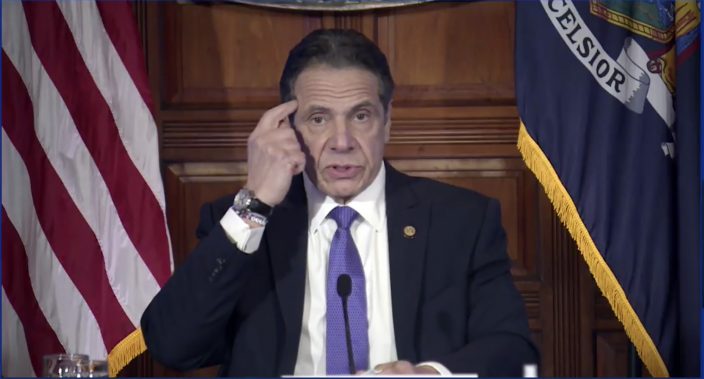 In this image taken from video from the Office of the N.Y. Governor, New York Gov. Andrew Cuomo speaks during a news conference, Wednesday, March 3, 2021, in Albany, N.Y. Besieged by sexual harassment allegations, a somber Cuomo apologized Wednesday, saying he "learned an important lesson" about his own behavior around women, but he said he intended to remain in office. (Office of the NY Governor via AP)

She said it was after the unnamed woman reached out to her with a story of being harassed by Cuomo that she decided to come forward with her own story of sexual harassment in a series of Twitter posts in December.

Boylan elaborated on her accusations in a Feb. 24 Medium post in which she said Cuomo once suggested a game of strip poker and on another occasion kissed her without her consent.

Two additional women have made accusations against the 63-year-old Cuomo since then. Charlotte Bennett, 25, a former low-level aide said Cuomo quizzed her about her sex life and told her he would consider dating “anyone above the age of 22." Anna Ruch, 33, told The New York Times that Cuomo put his hands on her face and asked if he could kiss her after meeting her at a September 2019 wedding.

Facing calls for his resignation, Cuomo said Wednesday he would remain in office but apologized for acting “in a way that made people feel uncomfortable.” He said he would cooperate with an investigation headed by state Attorney General Letitia James, a fellow Democrat.

Boylan told the magazine that she has been in touch with Bennett but not Ruch, adding that Ruch's story made her feel “nauseous.”

She said another factor in her own decision to name Cuomo as a sexual harasser was a Cicely Tyson interview she watched after Tyson's death.

“I always thought that if I was ever going to tell my story, it was going to be many, many years from now,” Boylan said. “But the Tyson interview really resonated with me. It shows you how much abuse affects people.”

Cuomo, who is in his third term as governor, was believed to be a contender for attorney general before Biden selected federal appeals court judge Merrick Garland, who has not yet been confirmed.

Alex White thought he was watching ...

Top associate of Navalny convicted of trespassing in Ru ...

A top associate of Russia's impris ...

Cuomo quiet on how office protects aides amid allegations