California will begin setting aside 40% of all vaccine doses for people who live in the most vulnerable neighborhoods in an effort to inoculate people most at risk from the coronavirus and get the state’s economy open more quickly.

The doses will be spread among 400 ZIP codes where there are about 8 million people eligible for shots, said Dr. Mark Ghaly, the state's health and human services secretary. Many of the neighborhoods are concentrated in Los Angeles County and the central valley, which have had among the highest rates of infection. The areas are considered most vulnerable based on metrics such as household income, education level, housing status and access to transportation.

Gov. Gavin Newsom, a Democrat, said at a Thursday news briefing that not only is this the right thing to do, but it's critical to opening up more of the state's economy. 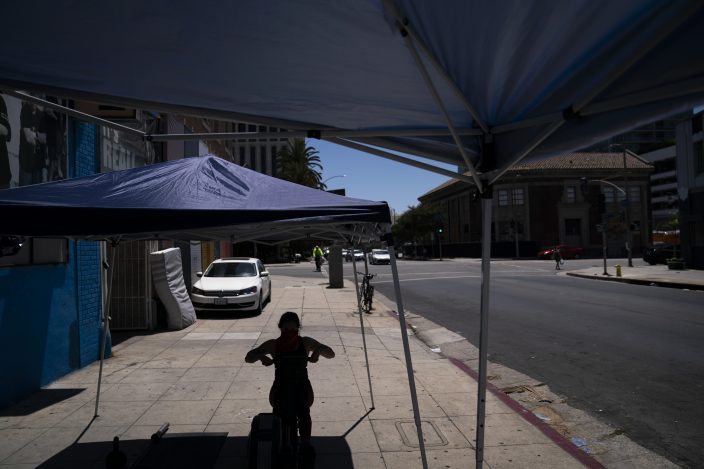 FILE - In this Aug. 7, 2020, file photo, a woman works out at an outdoor gym in Los Angeles. Los Angeles County could move into the next phase of reopening with fewer restrictions as early as next week, though any actual lifting of coronavirus-related constraints would not happen immediately, health officials said Wednesday, March 3, 2021. (AP PhotoJae C. Hong, File)

“It is a race against the variants. It's a race against exhaustion. It's a race to safely, thoughtfully open our economy, mindful that it has to be an economy that doesn't leave people behind, that is truly inclusive,” he said, adding that he’s also encouraging people to wear two masks.

The announcement is the latest change in an ever-evolving system to get California's nearly 40 million residents vaccinated, adding to ongoing confusion among people who just want to know when they can get the shot. The move to ease reopening standards also comes days after several Republican-led states announced they were lifting COVID-19 restrictions as the U.S. now has three vaccines available.

The new policy of tying reopening to vaccination equity metrics was cheered by representatives of the medical and small business communities, and legislative Black and Latino caucuses. Latinos make up roughly half of cases and deaths in California even though they are 39% of the population.

“Vaccines are the ticket to the end of the pandemic,” said Assemblymember Sydney Kamlager, a Democrat and vice chair of the Legislative Black Caucus in a news release sent out by Newsom's office. “For too long, those tickets were taken by people with a wealth of time and resources."

Currently, people 65 and over, farmworkers and grocery clerks, educators and emergency service workers are eligible for shots in California; transit workers, flight attendants and hardware store clerks are among those clamoring to be added to the priority access list.

Setting aside 40% of vaccine supply essentially means that hard-hit ZIP codes will be administering double what they are currently, Ghaly said. Data show that of shots given, only about 17% were administered in vulnerable communities that have disproportionately been affected by the pandemic.

Double that amount was going to those in the top quarter of what California deems the healthiest communities when measured for education, wages, health care access and transportation, Ghaly said.

Newsom has called equity the state’s “North Star.” Yet community health clinics focused on serving low-income and vulnerable Californians say they haven’t been getting enough doses.

Ghaly said Thursday that Newsom's administration will work with communities to make sure the vaccine actually ends up in the arms of those patients, not to day-trippers from wealthier ZIP codes who have the time and tech savvy to schedule appointments online. Newsom said addressing the problem is like playing “whack-a-mole.”

Andie Martinez Patterson, vice president of government affairs at the California Primary Care Association, said Thursday the centers have been working with Blue Shield on a plan to target only their patients in a bid to close off access to people from wealthier neighborhoods.

“We’re trying to ensure those people we are targeting are coming, not the vaccine seekers,” she said, adding that recently a South Los Angeles clinic found its appointment slots had been booked by residents of Beverly Hills.

At the same time, the association wants greater latitude to vaccinate people from underserved communities even if they are not patients.

Ghaly assured reporters that people with certain disabilities or underlying health conditions who will be eligible in mid-March will not be left out as many live in some of the disadvantaged areas. He said he expects all communities to get at least as much vaccine as they’re getting now, with others getting more because of this new strategy.

Once 2 million vaccine doses are given out in those neighborhoods, the state will make it easier for counties to move through tiers that dictate business and school reopenings. With 1.6 million shots administered, he said he expects to hit that target in the next week or two.

Once the state gives out 4 million doses in those neighborhoods, state officials will revise the metrics for reopening sooner.

Right now, a county can move from the most restrictive purple tier to the lower red tier based on several metrics, including having seven or fewer new COVID cases per 100,000 people per day over a period of several weeks. Now, that will shift to 10 new cases or fewer, allowing businesses such as restaurants and gyms to reopen at limited capacity.

Also in the red tier, schools that want to access new state funding must provide in-person learning for students in transitional kindergarten through grade 6 and at least one grade each in middle and high school.

More counties have already been moving into the red tier as caseloads, hospitalizations and deaths drop. The state’s average 2.2% test positivity rate over seven days is a record low.

Officials argue that easing reopening restrictions makes sense since the likelihood of widespread transmission that can overwhelm hospitals will decrease as more people are vaccinated. That’s particularly true as the most vulnerable populations that are more likely to get seriously ill receive the shots.

While race and ethnicity are not explicit factors in designating vaccinations, the 400 vulnerable ZIP codes overlap heavily with neighborhoods with higher populations of Blacks, Latinos and Asian and Pacific Islanders, officials said.

No room for error: Atlético must beat Eibar to keep lea ...

On the schedule, a home match agai ...

FEMA vaccination sites to close as California ramps up shots

California urges stop to 300K vaccines after some fall ill

California sees bright spot in 'most intense surge' of virus