Comments made by former U.S. President Donald Trump do not meet the standard to halt an extradition hearing of a senior executive for Chinese communications giant Huawei Technologies, a Canadian justice department lawyer argued in a court Thursday.

Canada arrested Meng Wanzhou, the daughter of Huawei’s founder and the company’s chief financial officer, at Vancouver’s airport in late 2018. The U.S. wants her extradited to face fraud charges. Her arrest infuriated Beijing, which sees her case as a political move designed to prevent China’s rise.

The U.S. accuses Huawei of using a Hong Kong shell company called Skycom to sell equipment to Iran in violation of U.S. sanctions. It says Meng, 49, committed fraud by misleading the HSBC bank about the company’s business dealings in Iran. 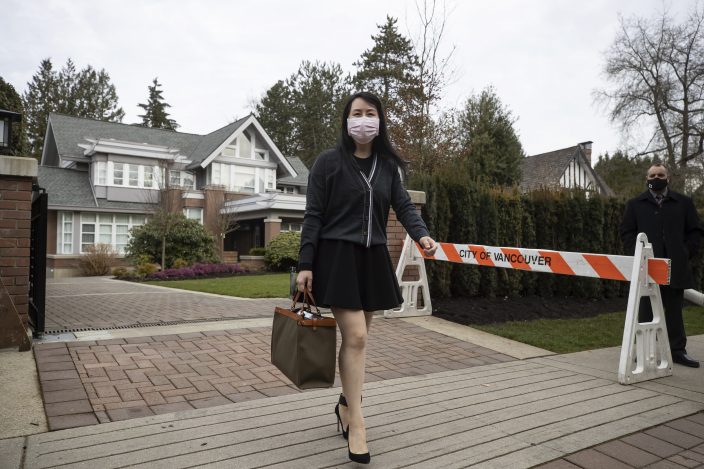 In a 2018 interview, Trump said he would “intervene (in the case) if I thought it was necessary” to help secure a trade deal with China or aid U.S. security interest.

Meng’s defense team say the comments are a threat that turned her into “a bargaining chip” and amount to an abuse of process.

Canadian justice department lawyer Robert Frater said there was no evidence to suggest the former president’s words had any impact on the fairness of the proceedings against Meng.

Frater dismissed allegations Meng is being used as a political pawn in a power struggle between the U.S. and China.

“We urge you to focus on the facts and the law and leave the politics to the politicians," he said.

Meng, who attended the hearing dressed in a short black dress that exposed the electronic tracking bracelet on her ankle, listened to the proceedings through an interpreter.

Over the next several weeks Meng’s defense team will present several justifications for halting the extradition proceedings.

Later this month, they will claim an abuse of process, saying Canada Border Services Agency officers detained and questioned Meng without a lawyer, seized her electronic devices and compelled her to give up their passcodes before her official arrest.

Her lawyers also contend the U.S. is exceeding the limits of its jurisdiction by prosecuting a foreign citizen for actions that took place in Hong Kong and said Canada was misled by the U.S. about the strength of its case.

Huawei daughter back in Canada court in US extradition case

Trudeau looks to Biden for help in dispute with China