Your eyes won’t be playing tricks on you Friday night when a fleet of trucks at Las Vegas Motor Speedway all look exactly the same.

The distinct blue and yellow Camping World logo could be on as many as a dozen trucks as company CEO Marcus Lemonis has taken charge of the sponsorship woes plaguing the Truck Series. Camping World has been the title sponsor of NASCAR’s third-tier series since 2008, but Lemonis over the last month has taken interest in some of the teams running on financial fumes.

He announced before last month’s season-opening race a monetary bonus fund — it even awards money to crew members at various season markers — as well as an emergency fund for teams short on cash. 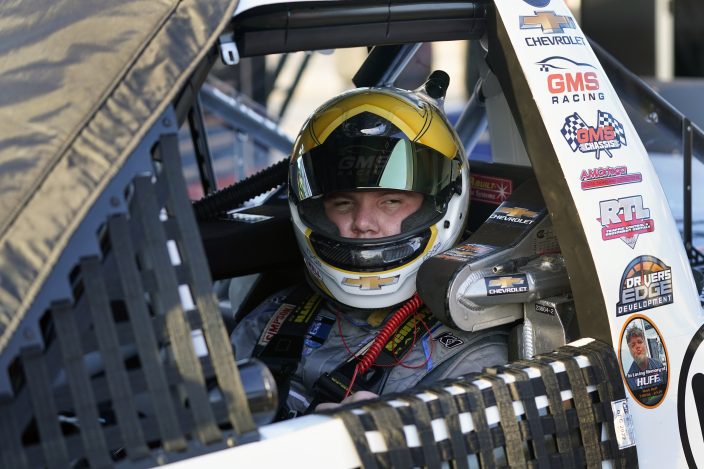 Sheldon Creed gets ready to go out on the speedway during practice for the NASCAR Trucks auto race at Daytona International Speedway, Thursday, Feb. 11, 2021, in Daytona Beach, Fla. (AP PhotoJohn Raoux)

Grant Enfinger, winner of four races last season and a championship-round driver, appears to be the first driver to have taken Lemonis up on the offer. His ride at ThorSport Racing has been cut in half this year because another driver had sponsorship money to buy races and Enfinger had no seat scheduled for Friday night.

Enfinger took Lemonis up on his offer and brought Camping World sponsorship to CR7 Motorsports so he could race at Las Vegas.

And then the floodgates opened. 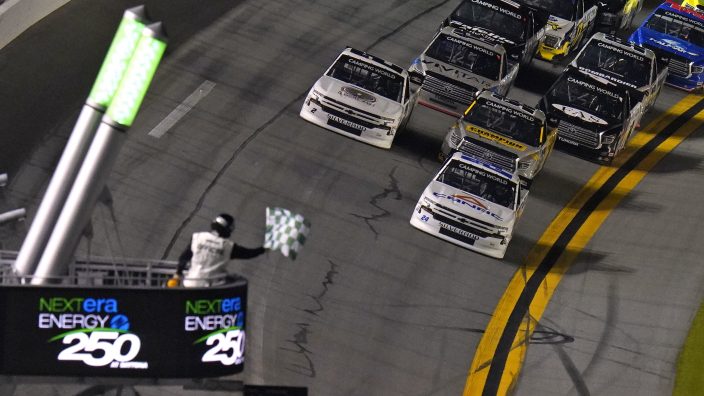 There has been a flurry of transactions since — seemingly all brokered on Twitter — and not even Lemonis is sure how many trucks will be wrapped in Camping World schemes Friday night. The entry list released earlier this week showed at least seven of 40 trucks did not have sponsorship for Las Vegas.

“I’m embarrassed to say that we don’t have the final count and there are a few scrambling now,” Lemonis told The Associated Press on Thursday morning about his sponsorship offers.

Sheldon Creed, the reigning Truck Series champion, took the offer. He initially didn’t think GMS Racing could complete a Camping World wrap in time for Las Vegas and asked Lemonis if the offer was good for races later this month. The deal got done for Las Vegas, after all.

Creed, a five-time winner last season, has been frustrated by the difficulties to obtain sponsorship.

“It’s tough for everyone to begin with, and if you are a business and want to spend money, you want to go straight to Cup,” Creed said. “And Cup (Series) teams are maybe not taking full money right now. That makes it harder for us truck teams, and we are forced to take less money than what the truck races actually cost.”

Lemonis recognizes the financial difficulties facing teams in the Truck Series. He told all the teams at Daytona that he’d pledged more than $500,000 in cash and prizes — including an electric pickup truck and a Lordstown electric (Class E) RV — to this year’s champion.

He also established that emergency fund, a game-changer for teams barely making it to the track.

His motives aren’t exactly altruistic: Lemonis learned early in his NASCAR involvement how valuable the advertising was to his brand.

It became what Lemonis referred to “a stylistic negotiating tool” because every dollar he spends on sponsorship is ultimately amortized over a 12-month period. Camping World today now has sponsorship deals in college football, Major League Baseball and, late last year, took over entitlement rights for the NHRA in another deal that began on Twitter.

In the end, Camping World receives far more attention for the $200,000 or so Lemonis has pledged at Las Vegas than the company would if it was just another Friday night race.

Lemonis understands that the racing business model is flawed but doesn’t have the “seat at the table” required to push changes. If he had his way, the Truck Series would race on the same day as the top Cup Series with one ticket needed for both events.

If Camping World’s contract with NASCAR was up for renewal, Lemonis would push his plan. In the meantime, teams and drivers are searching for every possible dollar.

Austin Hill makes his 100th career start Friday night at Las Vegas, a milestone in a career that began when his father’s welding company backed him as a child. A deal between Hill’s father and United Rental helped Hill make it to NASCAR’s national series, but father and son are always seeking funding.

He’s not had to take Camping World money yet, but still has races unsold.

“No matter what sponsor you have, you are still trying to find a little more money, a little more that can help your program,” Hill said. “The sport is tough, but we all love it so you keep grinding it out and make the most of it and try to please the sponsors and keep them in the sport.”