LeBron James has faced Giannis Antetokounmpo as an opponent in the last three All-Star Games.

The Los Angeles Lakers' star got him as a teammate this year.

James used the No. 1 overall pick on Antetokounmpo — the NBA’s two-time reigning MVP from Milwaukee — in the draft for Sunday’s All-Star Game in Atlanta. Kevin Durant, who will not play in the All-Star Game because of injury but still is the captain for Team Durant, took Brooklyn teammate Kyrie Irving with his first pick. 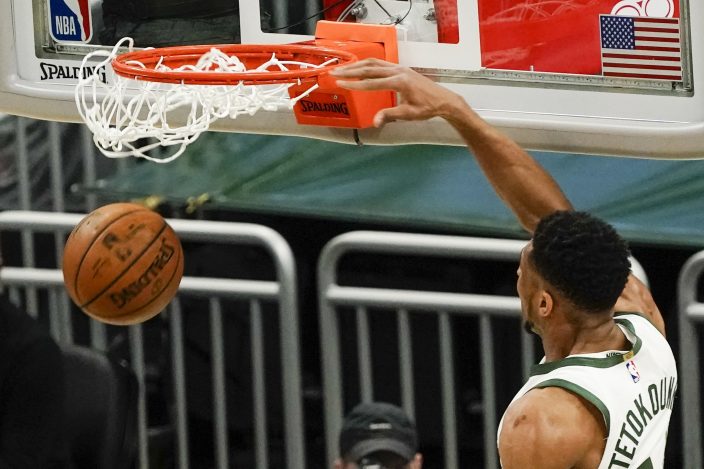 Milwaukee Bucks' Giannis Antetokounmpo dunks during the first half of an NBA basketball game against the Denver Nuggets Tuesday, March 2, 2021, in Milwaukee. (AP PhotoMorry Gash)

This is the fourth year of the NBA's playing captain format for the All-Star Game. James is 3-0, beating teams captained by Curry in 2018 and Antetokounmpo in the last two seasons.

“I just try to pick players that can complement one another,” James said during the draft that was taped Wednesday and aired Thursday night on TNT. “When we’re on the floor, we’ll try to play the game the right way. It’s the All-Star Game, so there’s going to be some shenanigans out there. But for the majority of the game, we’re going to try to play the right way and come out with a win.” 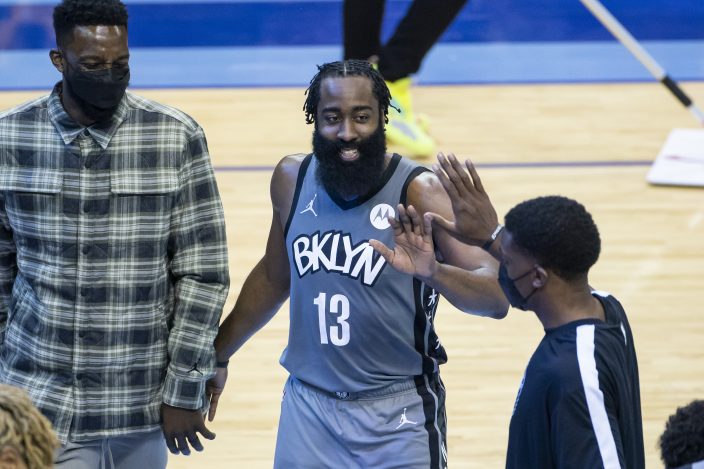 Brooklyn Nets guard James Harden (13) celebrates as he leaves the game during the second half of an NBA basketball game against the Houston Rockets Wednesday, March 3, 2021, in Houston. (Mark MulliganHouston Chronicle via AP)

Durant had the first pick of the reserve round and took another Brooklyn teammate, James Harden with the opening selection there. James’ first pick among the reserves was Damian Lillard of Portland, Durant followed by taking Devin Booker of Phoenix, and James countered by selecting Ben Simmons of Philadelphia.

Mitchell and Gobert, respectively, were the last two players taken despite being the only All-Stars from the Jazz — who hit the break with the NBA’s best record at 27-9.

“This is slander, America,” TNT analyst Charles Barkley said during the taping.

Durant took Mitchell, which left Gobert to James as the final selection. And James did his best to diffuse what he knows will inevitably be a topic of conversation — how the Jazz got snubbed during the draft.

The NBA and the National Basketball Players Association have committed more than $3 million to aid historically Black institutions as part of All-Star Sunday, with at least $1.75 million coming from the game itself.

Team LeBron will play on behalf of the Thurgood Marshall College Fund. Team Durant will play for the United Negro College Fund. Both organizations will receive $500,000 to start, and the winners of the first, second and third quarters will collect another $150,000. The team that reaches the target score and wins the game first will get $300,000 more.

“It’s an honor that we get to represent so many people and use this platform to help advance education, our youth, just the world in general,” Durant said.

Athletes who make political or soc ...