Chris Kreider had his second hat trick in five games and the Rangers beat the slumping New Jersey Devils 6-1 on Thursday night in a game marred by a late injury to New York goalie Igor Shesterkin.

Kreider, who scored three times in a loss to Philadelphia on Feb. 24, has nine goals in his last six games, and 13 overall. He completed his natural hat trick 23 seconds into the final period after scoring twice in the second. His fourth career hat trick came on five shots.

Shesterkin seemed to hurt his right leg with just under six minutes to play when he stretched to stop a 2-on-1 break and shot by Damon Severson. He went down without contact and had to helped off the ice, dragging the leg. 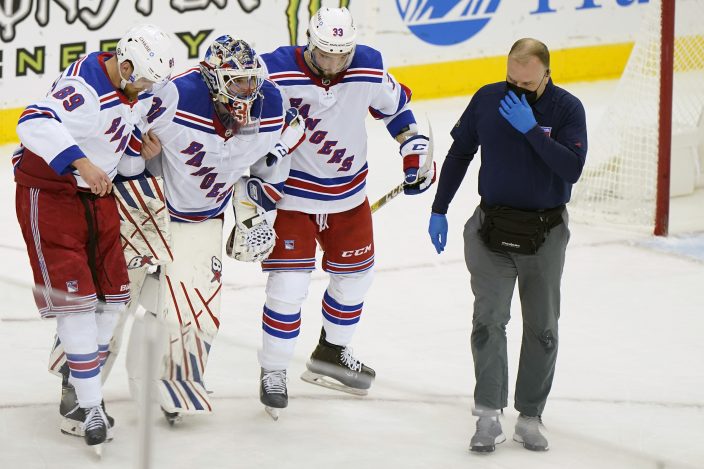 Shesterkin kept the Rangers in the game in the first period by stopping 13 of 14 shots. He finished with 32 saves in helping the Rangers win their second straight and their fifth in seven. Pavel Buchnevich, Brendan Smith and Alexis Lafreniere also scored for New York.

Jack Hughes scored for the Devils.

Matt Martin scored twice and New York beat Buffalo in the opener of a three-game series.

Noah Dobson, Anthony Beauvillier and Jordan Eberle also scored for New York, and rookie Ilya Sorokin stopped 16 shots. The Islanders improved to 5-0-1 in their last six overall and 8-0-2 at the Nassau Coliseum to remain the only team without a regulation loss at home.

Claude Giroux scored his second goal of the night on a tap-in with 2:08 remaining and Philadelphia overcame an early Pittsburgh deluge.

Scott Laughton and Sean Couturier also scored for the Flyers. They trailed by three following a 71-second first-period onslaught by Pittsburgh.

Brian Elliott overcame a rough start to stop 26 shots as Philadelphia won its first game after falling behind 3-0 since earning a shootout victory over Buffalo on Oct. 25, 2016.

Pierre-Luc Dubois scored at 4:29 of overtime to lift Winnipeg past Montreal in the opener of two-game series.

Dubois fired a rolling puck past goalie Jake Allen for his fifth of the season. Winnipeg improved to 5-0 in overtime this season, and Montreal fell to 0-4.

Paul Stastny scored twice, and Mathieu Perreault added a goal for Winnipeg. The Jets have won six of seven to improve to 15-7-1. Corey Perry, Brendan Gallagher and Tyler Toffoli also scored for Montreal. The Canadiens are 1-3 under interim head coach Dominique Ducharme.

The teams will meet again Saturday night in Montreal.

The NHL has suspended Vancouver Ca ...