Georgia Gov. Brian Kemp and Secretary of State Brad Raffensperger won wide praise last fall for firmly rejecting then-President Donald Trump’s false claims of voter fraud. But now that those claims have spawned an effort to tighten voting laws — one that could affect their political fortunes — the two Republicans are taking a softer approach.

Both men say they support Georgia Republicans' efforts to enact an ID requirement for absentee voting that would do away with the state's signature matching system, which Trump heavily attacked.

Their positions illustrate how central tightening access to the ballot has become in the GOP agenda — embraced even among those who have publicly refuted claims of fraud or stolen elections. 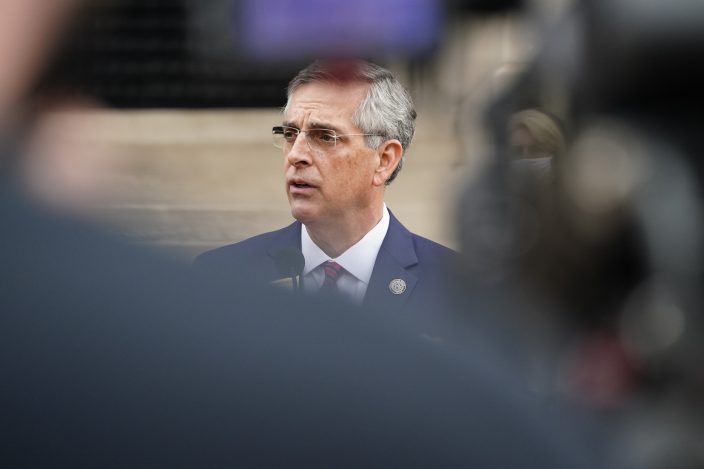 FILE - In this Wednesday, Nov. 11, 2020, file photo, Georgia Secretary of State Brad Raffensperger speaks during a news conference in Atlanta, announcing an audit of presidential election results that will trigger a full hand recount. In Georgia, Georgia Gov. Brian Kemp and Secretary of State Brad Raffensperger won wide praise last fall for firmly rejecting former President Donald Trump’s false claims of voter fraud. But now that those claims have spawned an effort to tighten voting laws, one that could impact their political fortunes, the two Republicans are taking a softer approach. (AP PhotoBrynn Anderson, File)

But it also highlights the difficult politics for Republicans as they weigh how far to go to that end. While the bills being pushed in Georgia and several other states have the backing of a GOP base that embraces Trump, they also could stir up Democratic backlash, not to mention make it harder for GOP voters to cast ballots.

For Raffensperger and Kemp, both up for reelection in a state where Democrats are ascendent, that's a dual threat that could lead to defeat in 2022.

Kemp, Raffensperger and their aides are working quietly with Republican legislators to craft changes to absentee and early voting they believe can strike a balance. That may mean jettisoning or at least relaxing some of the proposals circulating in the Republican-run General Assembly, which include scrapping an automatic voter registration law and banning early voting on Sundays, a move that appeared aimed at ending “souls to the polls” voter drives run by Black churches.

But the Republican leaders have been cautious about publicly opposing any individual measure. “I think it should be easy to vote and hard to cheat,” Kemp said Wednesday, recycling a go-to line from his days as secretary of state.

Raffensperger has tacitly aligned himself with Republicans who question voting by mail, even after he mailed ballot applications to every registered voter in Georgia last spring as the coronavirus pandemic upended primary elections. “I have always had some questions about the absentee ballots,” he said in an interview with Georgia Public Broadcasting.

Raffensperger has said he supports adding a voter identification requirement to absentee ballot submissions and wants to end no-excuse absentee voting, a proposal that has received pushback from some Republicans. Over 1 million Georgians — more than a fifth of the electorate — cast absentee ballots in 2020.

Still, it's unclear whether that's enough to win over Trump loyalists who still blame Raffensperger for standing up to the former president as he tried to overturn the will of the people.

As Trump disputed Democrat Joe Biden’s victory in Georgia, Raffensperger argued the election was accurate and fair. He wrote an op-ed saying he felt “thrown under bus” by a president he’d supported. Weeks before the Jan. 6 insurrection at the U.S. Capitol, a Raffensperger aide angrily predicted the president’s rhetoric would lead to violence. A recorded conversation between Trump and Raffensperger leaked to media, allowing the public to hear Trump pressure Raffensperger and his office to “find 11,000-plus votes” to reverse Biden’s win.

While Kemp was far less confrontational, it fell to him to formally certify Trump's loss. And he did.

“Brad Raffensperger could rise from the dead and heal people and he’d still lose next year. He’s done. Kemp’s done,” Dooley said. “The establishment has no idea how popular Trump still is with the grassroots. Folks are going to make them pay, and I can guarantee you Donald Trump is coming after Brian Kemp.”

Indeed, Trump on Thursday issued a statement singling out Kemp as a reason he lost and accusing the governor of “failing to stand up to Stacey Abrams,” the voting rights advocate whom Kemp defeated in 2018. She also is Democrats’ most likely nominee in 2022 and has for years framed Kemp as leading a coordinated effort to suppress the votes of Black Georgians.

“We and our allies are watching all of this” with an eye on potential lawsuits, said Lauren Groh-Wargo, who managed Abrams’ campaign and now leads her Fair Fight organization. “But we’re also planning for 2022 as if we can’t stop any of this” from being enacted.

The political dynamics are especially vexing to Kemp.

Trump endorsed Kemp in a 2018 Republican primary. Kemp, even as a longtime elected official, successfully framed himself as the outsider candidate, like Trump, and he used his background in agriculture, complete with ads featuring his old pickup truck, to connect the same cultural conservatives who fueled Trump in 2016.

Kemp never criticized Trump and has said he'd support him if he ran again in 2024. And Kemp stressed throughout the certification process that he was only following the law that expressly required him to ratify Biden’s slate for the Electoral College.

Still, Kemp already had created a rift with Trump’s base by appointing Republican Kelly Loeffler to fill a vacant Senate seat in early 2020 rather than Rep. Doug Collins, who’d been one of Trump’s fiercest allies on Capitol Hill. Loeffler ended up losing her Senate runoff election by a wider margin than Republican Sen. David Perdue lost his, suggesting a drop-off of support from some Republican voters.

Senior GOP aides describe Kemp and Raffensperger as involved, separately, with leading lawmakers as the state assembly considers its options. Two broad bills, among scores of others, are expected to yield the final product.

The House version, which passed Monday on a party-line vote, would require a photo ID for absentee voting and limit the number of weekend days counties can schedule early voting, among many other changes. The Senate bill would limit absentee voting to just seniors, people with disabilities and people who’ll be out of town. That would end no-excuse mail voting that a Republican-controlled legislature adopted in 2005.

Raffensperger's office has worked against ideas they believe could be struck down as unconstitutional. He won a House amendment that would allow counties to choose to hold one day of early voting on a Sunday, avoiding the proposed ban.

The governor’s office, Republican aides say, is looking ahead to a potential conference committee to hash out a compromise between the two chambers. That scenario could give Kemp his most direct opportunity to shape a version that he finds palatable and that Republican legislators have little choice but to support.

Republican Senate Leader Mike Dugan, an almost-certain member of any compromise committee, predicted wide Republican support in the end. “We can get there,” he said. “Just be patient. Let's see what comes out.”

U.S.'s John Kerry in China for talks ahead of clim ...