Willie Calhoun knew he was comfortable facing left-handed pitchers again after fouling off a curveball in the spring training opener.

The Texas Rangers outfielder didn't flinch or bail out of the batter's box. There were no flashbacks to last March, when he remembers waking up in the hospital, but not the exact moment during a spring training game when a fastball hit the left-handed hitter in the face and broke his jaw.

“I was like, OK, I actually feel good now,” Calhoun said Thursday. “I think that curveball kind of got me back in there because it looked like it was going to hit me, but I was able to stay through it. ... I hit it on the barrel, it was just foul." 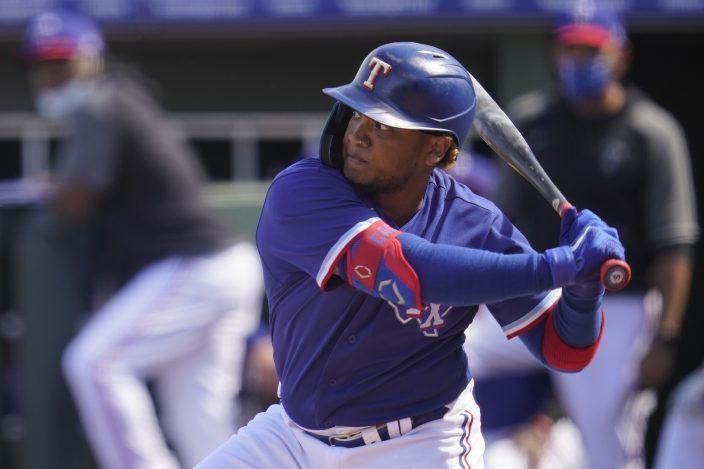 Texas Rangers' Willie Calhoun bats in the fourth inning of a spring training baseball game against the San Diego Padres, Thursday, March 4, 2021, in Surprise, Ariz. Calhoun, who got hit in the face by a fastball in a 2020 spring training game says he no longer feels like flinching or bailing out on breaking pitches. (AP PhotoSue Ogrocki)

After drawing a walk in the first inning Thursday against San Diego's MacKenzie Gore, Calhoun has faced left-handers in all three of his games this spring. He has a single and two walks in four such plate appearances.

It was a year ago next Monday that Dodgers left-hander Julio Urías, his former minor league teammate, threw the pitch that hit Calhoun. (Los Angeles drafted Calhoun in 2015, two years before trading him as part of a deadline deal to acquire Yu Darvish from the Rangers.) After being airlifted to a hospital, Calhoun had a plate surgically inserted the following day to stabilize his jaw.

That was only days before MLB spring training was shut down because of the coronavirus pandemic and pushed the start of the season to late July. Calhoun didn't miss any regular-season games because of the jaw, but didn't play in the opener because of a hip strain and later missed a month with a left hamstring strain. He played only 29 games in the shortened 60-game season, and hit .190 in 100 at-bats. 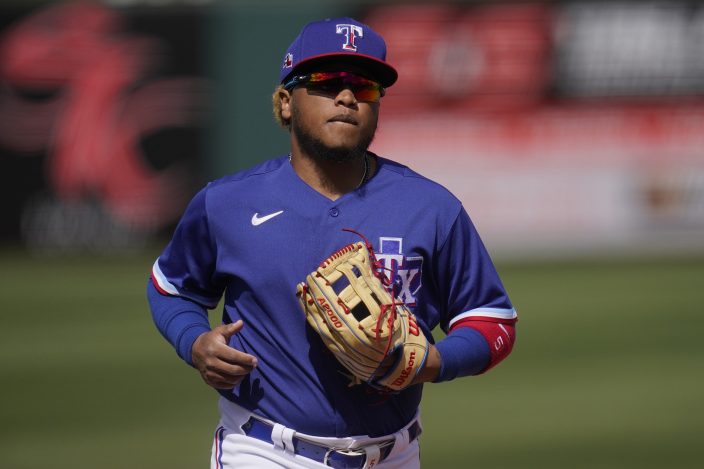 Texas Rangers left fielder Willie Calhoun runs in from the outfield during the first inning of the team's spring training baseball game against the San Diego Padres, Thursday, March 4, 2021, in Surprise, Ariz. Calhoun, who got hit in the face by a fastball in a spring training game last year, says he no longer feels like flinching or bailing out on breaking pitches. (AP PhotoSue Ogrocki)

While Calhoun had a .368 average versus left-handers, that was in only 19 at-bats (seven hits). And he never felt comfortable at the plate in those situations like he has already this spring.

“I feel completely normal again,” he said. “Last year, I would bail out on offspeed pitches, I would be really jumpy, I wouldn’t really stay in there. ... I’m not really having that thought in the back of my head anymore. So it’s encouraging for me to feel that way."

During a Zoom call from the Rangers spring training complex in Surprise, Arizona, the 26-year-old Calhoun was smiling and laughing with reporters. He said one of his biggest goals for 2021 is to get back to being himself and having fun — “That's when I'm at my best,” he said.

“He put a lot of work in, not just physically but mentally,” manager Chris Woodward said. “He had to clear his mind a little bit after what happened to him last year. He's in a good spot right now.”

Rangers slugger Joey Gallo described Calhoun as “just smiling” and happy when he arrived at the house they are sharing in Arizona this spring. After his injury-shortened All-Star season in 2019, Gallo hit .181 with 10 homers in 57 games last year. He said the roommates are motivating each other and holding each other accountable to keep positive mindsets.

“We’re there for each other, and I want to see him succeed. He’s a great kid,” said Gallo, who has homered in each of his three games this spring. “The at-bats that he’s having against lefties right now, it’s incredible. To get hit in the face and come back a year later and to be facing lefties the way he is ... he’s not getting enough credit for that. I'm really proud of him, the whole organization is.”

After hitting .269 with 21 homers and 48 RBIs in 83 games in 2019, Calhoun went into last spring as the primary left fielder expected to hit in the upper third of the lineup because Texas had traded away outfielders Delino DeShields and Nomar Mazara. Calhoun was the designated hitter for 21 of his 29 games last season.

There is now plenty of competition this spring after the Rangers signed David Dahl, a former All-Star outfielder who wasn't tendered a contract by Colorado, and acquired OF/DH Khris Davis in the trade that sent shortstop Elvis Andrus to Oakland.

“It wouldn’t be a normal spring training for me if I didn’t have to deal with something,” Calhoun said. “Last year was the first one where I kind of could have just taken a deep breath and kind of like prepared for a season. But then I got hit in the face. ... I don’t really try to look at this spring training too much differently. But I’d say for sure, I’m definitely more prepared for it and I’m excited for it."