Scouts seem to agree as Abogidi has quietly played his way onto the NBA draft radar. That was always the plan, but after introducing himself nearly four yours ago with a free throw-line dunk that became a social media hit, Abogidi practically disappeared Down Under.

The high-flying Abogidi, who plays forward and center for the Cougars, was grounded for more than two years after badly injuring his left knee in a June 2017 game at the NBA Global Academy in Canberra, Australia. He tore his ACL, MCL and meniscus and underwent the first of three surgeries. 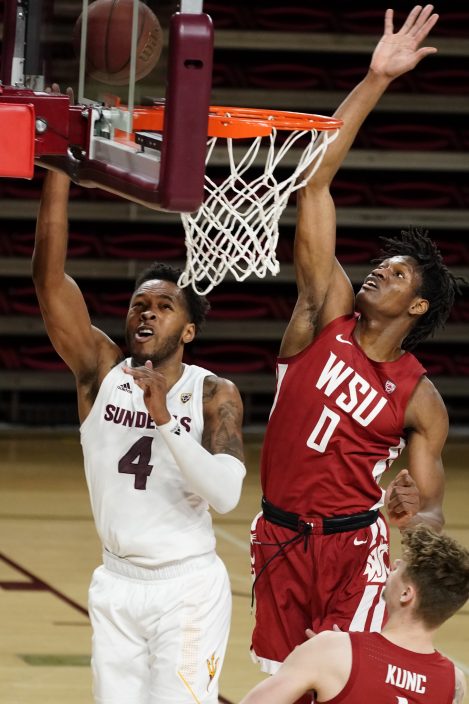 “I wasn't really thinking about playing basketball. I was just focused on getting my leg back on track,” Abogidi said in an interview with The Associated Press.

“I'd see my team training every day, I just felt left out sitting on the sidelines for two years. It just gets in your head, makes you feel like you don't love the game you used to love before. But after my first practice back, I thought, I still have a little stuff in me, I could go harder, I could take this a lot further.”

Abogidi has started all 26 games for the Cougars (14-12, 7-12), averaging 8.9 points, 7.3 rebounds and 1.3 blocks per game as they prepare for the Pac-12 Tournament. In late December, he was the conference's freshman of the week, an award dominated by expected lottery pick Evan Mobley of USC. 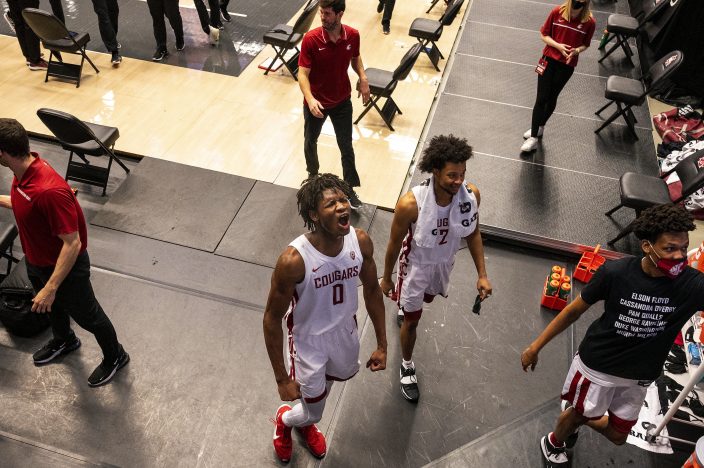 FILE - In this Saturday, Feb. 20, 2021 file photo, Washington State center Efe Abogidi, centre, celebrates alongside guard Myles Warren (2) after beating Stanford, in an NCAA college basketball game, in Pullman, Wash. A serious knee injury nearly ended Efe Abogidi's basketball career but he's now back on the NBA draft radar. The 19-year-old Nigerian is known for his high-flying dunks and plays for Washington State in the Pac-12. But his journey from West Africa to the West Coast was atypical with stops in Senegal and Australia. (AP PhotoPete Caster,File)

The campus in Pullman is a long way from Ughelli in southern Nigeria, where as a 12-year-old boy Abogidi played pickup games on the town's lone court, featuring a crooked rim and no net.

As he grew, his sneakers were too small but he kept wearing them until holes developed.

He moved to Lagos and joined an academy run by former NBA player Olumide Oyedeji.

"I put him in school, he lived with me, played for my team,” said Oyedeji, who has become a father figure to Abogidi. “He understood that to be the best player, you need to be in a better environment.”

When he outgrew Lagos, he moved to Senegal for the NBA's African academy — part of the league's global ecosystem giving recruits access to elite facilities, coaching and medical care.

Abogidi was playing at a tournament in Canberra when he was bumped while dunking. He landed awkwardly and the damage was done.

“I still have a lot of stuff to work on but I feel like I’m creating a path for myself,” he said. “Not a lot of people go through a journey from Nigeria to Senegal to Australia, then go to the USA to play basketball.”

He's 6-foot-9 and 220 pounds — Abogidi says he's generously listed as 6-10 — with a 7-foot-4 wingspan. He's often described as “raw” and lacks ball-handling skills, but his 81.9% free-throw shooting will impress scouts who see it as a barometer for long-range shooting potential. His 3-pointer against Stanford followed 20 consecutive misses from distance, however, which Abogidi chalked up to an injured finger.

Cougars coach Kyle Smith had visited Australia to watch Abogidi practice, having recruited Aussies like Matthew Dellavedova to St. Mary’s when he was an assistant there.

Besides Washington State, Abogidi also received scholarship offers from Creighton and the University of Texas-Arlington.

“Had he not been injured, I think every school in the county would have been knocking on the door trying to recruit him — he was that special of an athletic talent,” said Marty Clarke, technical director of NBA Global Academy, housed at the Australian Institute of Sport.

Abogidi said he hasn't decided about the NBA draft, though 2022 seems more plausible.

“I feel like next season I'll be better. My skills will be way more refined," he said. “Going against guys like (Mobley) makes me feel like I have a lot of stuff to work on, so I’m thinking come back next season and I’m ready and prepared to compete at the highest level."

Abogidi and the Cougars struggled adjusting to conference play, but he posted 13 points and 13 rebounds in a 77-62 win over Washington on Jan. 31 to snap a six-game losing streak.

The Cougars are assured of their first winning record in nine years.