Jason Spezza would have jumped at the opportunity to voice his support for women’s hockey even if he didn’t have four daughters growing up at home.

The veteran Maple Leafs forward was a big fan of the women’s game long before he was married, dating to years ago when Spezza attended a pre-Winter Games tune-up between Canada and the United States at a rink in suburban Toronto.

“It was one of the best hockey games I’ve watched,” he recalled this week. “There were 6,000 people packed in the building. And it didn’t matter that it was males or females. It was just a great hockey game.” 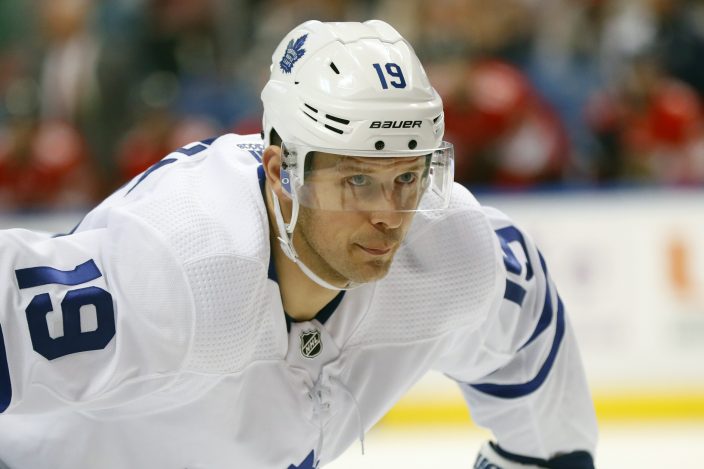 FILE - In this Jan. 12, 2020, file photo, Toronto Maple Leafs center Jason Spezza is shown during the first period of an NHL hockey game against the Florida Panthers, in Sunrise, Fla. With four daughters, Toronto Maple Leafs forward Jason Spezza has an invested appreciation of how important it is to grow women's hockey. Spezza was among a number of NHL players to voice their support in backing the Professional Women's Hockey Players' Association's latest campaign to establish a league. (AP PhotoWilfredo Lee, File)

That memory, coupled with the invested personal interest he has for his children, helped prompt Spezza to be one of numerous NHL players to participate in the Professional Women’s Hockey Players’ Association’s latest campaign promoting the need to establish a new North American women’s league.

“I think regardless if I have daughters or not, I think it’s a really important cause,” Spezza said. “But it definitely hits more close to home for me with having four daughters and a wife, and women’s rights and talking about equality, which we talk about quite a a bit about in our house.”

As PWHPA executive and Hockey Hall of Fame member Jayna Hefford says in the video: “Every young girl deserves to have the same visible hockey role models as every young boy.”

It was a message echoed by Edmonton Oilers forward Kyle Turris, who participated in the video.

“I have two sons and a daughter, and yeah, I think it’s important,” Turris said. “I want my daughter to grow up thinking she can run the world if she wants to do as well.”

Founded in May 2019 following the demise of the Canadian Hockey League, the PWHPA is made up of the world’s top female players united in a bid to establish a single North American professional league — ideally backed by the NHL — with a long-term sustainable economic model.

The association’s members have balked at playing for the U.S.-based six-team National Women’s Hockey League, and instead have been holding a series of barnstorming weekend events called the “Dream Gap Tour.”

This year’s tour opened with New Hampshire and Minnesota playing two games, including one at Madison Square Garden on Sunday, which was televised nationally in both the U.S. and Canada. This weekend, the two PWHPA U.S. hub teams will play two games at Chicago, including a contest at the United Center on Saturday that will be televised on NBC Sports Network.

The games represent a homecoming of sorts to U.S. national team member Brianna Decker, who grew up a Blackhawks fan in Wisconsin.

“I’m super exited to play there,” the two-time Olympian said, adding, “my brothers are definitely jealous.”

Decker is particularly impressed by the support the PWHPA has generated from NHL players and its franchises.

“Kyle Turris saying he wants his daughter to have the same opportunities as himself, that’s what we’re striving to do,” she said. “Right now, we have college hockey. And if you’re at the elite level, you make the national team. But after college, you’re usually just done playing, which is sad.”

Decker played at Wisconsin, where she had more access to resources and training facilities than when she played in either the CWHL or NWHL.

“There should be something bigger and better out there for us once you’re done with college,” she said, referring to a dedicated dressing room to being able to do your laundry at the rink. “Those are some little things that we’re striving for, aside from a financial backing.”

And that’s where PWHPA members say the NHL needs to step in. The league has provided some monetary support in the past, while also increasing the visibility of top female players by including them in each of the past two All-Star weekend festivities.

The NHL, however, has stopped short at committing to back a women’s pro league.

“I think the league and our board are supportive of women’s hockey, period,” Daly wrote in an email to The Associated Press on Friday. “We understand it’s importance to the game generally and the growth of our game going forward. But as you are seeing, that support can (and does) take a variety of forms.”

The NHL Players’ Association has also been on board in providing the PWHPA both monetary and organizational support, including attracting corporate sponsors.

Timing is becoming an issue, with the PWHPA hoping it can align the launch of a league with the quadrennial boost women’s hockey gains from Olympic competition. The Beijing Games are a year away.

“We want the NHL to step in and be like, `We’re going to support your league.′ We want that and we wish it was that easy,” Decker said. “Hopefully, Gary Bettman and the NHL can figure out a way to have our league started and get going, and have something that’s going to be long-term for us soon.”