Shohei Ohtani figured he’d be careful in his return to the mound after two injury-spoiled seasons.

A few batters in, the Los Angeles Angels’ two-way sensation reached back for a little extra -- and brought back some of the buzz that surrounded his major league debut three years ago.

Ohtani reached 100 mph with his fastball and showed off his signature splitter while striking out five over 1 2/3 innings in the Angels’ 7-3 win over the Oakland Athletics on Friday. The right-hander allowed a run, three hits and two walks, struggling to command his slider but showcasing the arm strength and stuff that allowed him to dominate in the majors before Tommy John surgery in 2018. Los Angeles Angels pitcher Shohei Ohtani looks at the baseball after a pitch against the Oakland Athletics during the first inning of a spring training baseball game, Friday, March 5, 2021, in Mesa, Ariz. (AP PhotoMatt York)

“Since this was my first game, I wasn’t planning on letting it go in the beginning, especially early in counts,” Ohtani said via translator. “As the game went on, I felt better and I started throwing harder, but I think that led to me cutting the ball a couple times, so it’s something I have to work on.”

The 26-year-old Japanese star stunned baseball with his two-way ability as a rookie in 2018, going 4-2 with a 3.31 ERA in 10 starts and hitting .285 with 22 homers as a designated hitter. He tore the ulnar collateral ligament in his right elbow during the season, though, and had Tommy John surgery that October.

Ohtani stayed off the mound in 2019 yet thrived as a full-time designated hitter. But he faltered on both sides of the ball trying to resume his two-way role during the pandemic-shortened 2020 season. He struggled in two starts on the mound and put his pitching on hold amid a right forearm/elbow strain. He slumped at the plate, too, hitting .190 with seven homers. 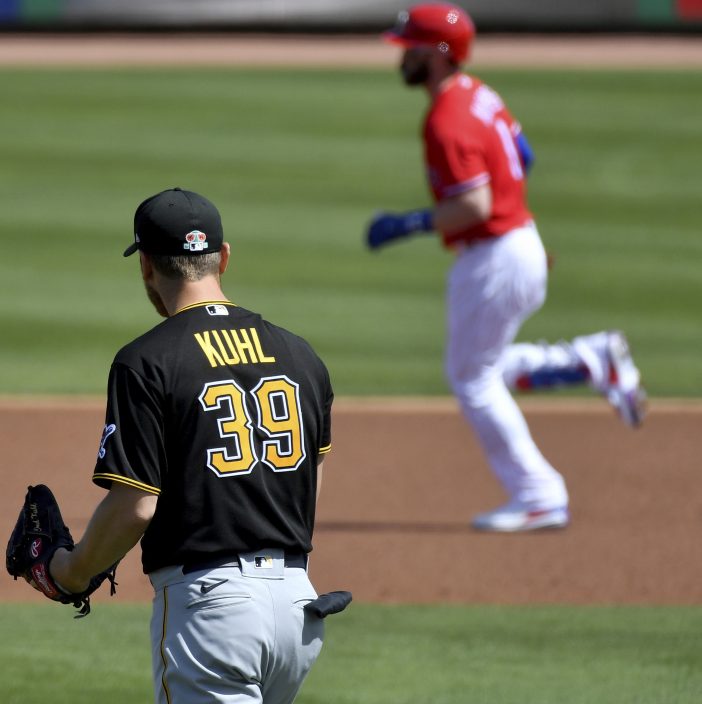 The 2018 AL Rookie of the Year is off to a strong start this spring on both sides. He crushed a 468-foot homer over the batter’s eye at Tempe Diablo Stadium in a game Wednesday, then showed improved mechanics on the mound Friday.

“It really starts with his delivery, I think it’s more clean and consistent,” manager Joe Maddon said. “I like his arm stroke better. It starts there and then he’s able to recapture the velocity he’s had in the past, and the really good break of his splitter. The big thing for his success is going to be repetition of delivery and knowing where his fastball is going consistently.” 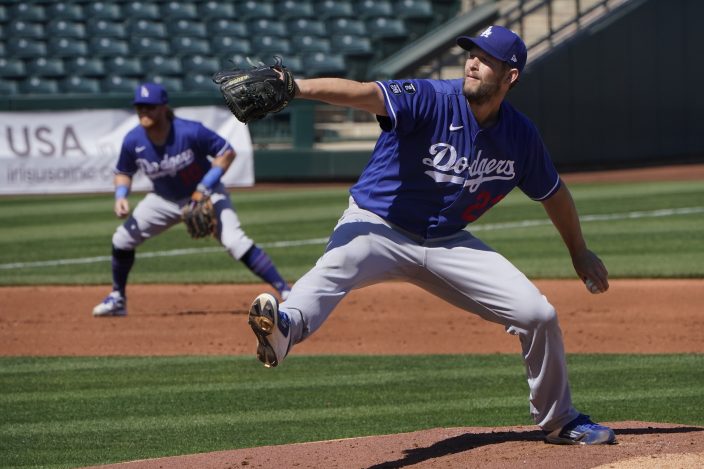 James Kaprielian struck out three and worked two scoreless innings in the start for the A’s. Matt Olson hit his second home run of the spring.

Bryce Harper homered on his first swing of spring training, launching a opposite-field drive to left. He singled in his next at-bat and was done for the day.

At 28 and starting the third season of a 13-year, $330 million contract, Harper is hoping there are bigger days ahead come October. The 2015 NL MVP has reached the playoffs four times, all with Washington, and never won a round.

Chase Anderson, vying for the fifth spot in the Philadelphia rotation, struck out three in two perfect innings. Andrew McCutchen homered for the Phillies.

Boston ace Eduardo Rodriguez pitched 2 2/3 innings in his first start since missing last season because of health concerns. The left-hander was 19-6 in 2019, then was sidelined by heart inflammation caused by COVID-19. Rodriguez struck out two and gave up one run and two hits.

Domingo Germán pitched two scoreless innings for New York in his first game since being banned in 2019 under Major League Baseball’s domestic violence policy. He struck out four and allowed one hit, a double by Wilson Ramos.

Germán spoke with his Yankees teammates last week and issued a public apology the next day.

Clayton Kershaw pitched two scoreless innings in his spring debut for Los Angeles. He gave up two hits, including a leadoff double to Whit Merrifield, and struck out two. Chris Taylor doubled off the base of the wall in left center-field, then cleared it in the fifth inning for a grand slam.

Brad Keller worked three innings in the start for the Royals and allowed a run on four hits and two walks. Michael Taylor hit a two-run home run.

AL MVP José Abreu grounded into a triple play with the bases loaded in the fifth inning. Facing Seattle reliever Domingo Tapia, Abreu hit a grounder to third base — the Mariners threw home for forceout, got Abreu at first and then nailed Tim Anderson trying to score from second base.

Kyle Lewis singled and doubled and scored both runs and Ty France singled twice and drove in a run.

Left-hander Trevor Rogers, one of pitching-rich Miami’s top five mound prospects, didn’t allow a hit while striking out three of the six batters he faced in his first start.

Jose Urquidy made his first start for Houston, allowing two hits and one run —on Brian Anderson’s homer — in two innings. Myles Straw tripled for one of the Astros’ two hits. Straw is batting .625 this spring as the replacement for departed center fielder George Springer, who signed a free-agent deal with Toronto in the offseason.

The Astros are minus eight pitchers because of coronavirus protocols. They're in no danger of running out of arms, however, with 39 pitchers in camp.

Hyun Jin Ryu made his first start for Toronto, yielding a solo home run to Pat Valaika and a walk in two innings with two strikeouts.

Kyle Wright fared much better in his second start for Atlanta, allowing one hit in three shutout innings with two strikeouts. He retired just four batters while giving up three runs in his first outing.

Newcomer Matt Shoemaker retired all seven batters he faced in his first start for Minnesota, striking out two. Keon Broxton had two of the Twins’ three hits, including a double.

Bobby Bradley, competing for Cleveland’s starting job at first base, hit a three-run homer. He dropped 35 pounds in the offseason, but it hasn’t affected his power. He’s homered twice this week.

Eddie Rosario added three RBIs for the Indians, who scored four runs in the third off Craig Kimbrel. The Cubs lost for the first time in four games.

Chicago’s Nico Hoerner homered in the second against Indians starter Triston McKenzie and added a single. Alec Mills worked two hitless innings in the start for the Cubs.

Corbin Burnes finished sixth in the NL Cy Young voting in 2020 and opened 2021 by striking out five of the seven batters he faced in a two-inning start. Jordan Zimmerman followed with two innings of work, allowing three runs on three hits. Derek Fisher and Nicholas Kahle homered for Milwaukee.

Pitcher Austin Gomber, the lone major league player the Rockies received from St. Louis in the trade for Nolan Arenado, allowed a hit and struck out two in his two-inning start. Trevor Story hit a three-run homer for Colorado.

Freddie Freeman’s first spring training game provided a preview of how the Atlanta lineup will be constructed to start the season. The NL MVP hit third behind Ronald Acuña Jr. and Ozzie Albies against the Minnesota Twins.

The Braves had success with Freeman hitting second last year, when the DH was in place in the National League. Now that it appears certain this season won't include the universal DH, Freeman is back to third. He confirmed being told by manager Brian Snitker that will be the plan to open the season.

“Putting me second with the pitcher hitting ninth, it just doesn’t really make sense for us,” Freeman said.

Freeman did not have a hit in two at-bats but said “I felt good. I swung at strikes. I got hitter’s counts. I hit the ball where it was pitched. All in all, it was a good day.”

Freeman was given the OK to report about a week late to spring training after the addition of two baby boys to his family.