Despite the coronavirus pandemic, Daytona Beach's annual Bike Week has brought tens of thousands of motorcyclists to the city and its neighbors this weekend — and few of them are wearing masks.

The city made a bargain with its bars — 60% capacity indoors in return for the permits necessary for temporary outdoor sales and entertainment. The city is trying to avoid what happened at the Sturgis, South Dakota, motorcycle rally in August — that event led to a disputed number of infections around the country, ranging from several hundred to tens or hundreds of thousands.

“I’m grateful to be open for Bike Week, grateful that the city allowed the vendors and the full Bike Week thing,” said Bobby Honeycutt, owner of Froggy’s Saloon, told The Daytona Beach News-Journal as the 10-day event began Friday. The bar is limited to 102 customers inside, but is serving from tubs and bars outside. 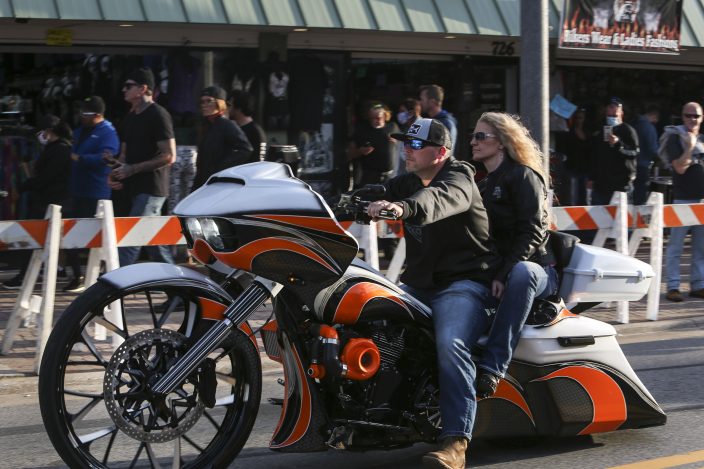 Bikers ride up and down Main Street in Daytona, Fla., during the start of Bike Week on Friday, March 5, 2021. (Sam Thomas Orlando Sentinel via AP)

The Daytona Regional Chamber of Commerce, which organizes the event, estimates 300,000 to 400,000 motorcyclists will attend. It typically draws 500,000.

“We know it’s likely to be less just because of COVID concerns, as well as many still struggling to make ends meet due to loss of income from COVID,” said Janet Kersey, the chamber's executive vice president and chief operating officer.

Sam Acquaro is attending his 46th straight Bike Week, even though he believes his son caught the virus at last year's, which happened just as the pandemic began spreading around the country and world. He is staying outdoors. 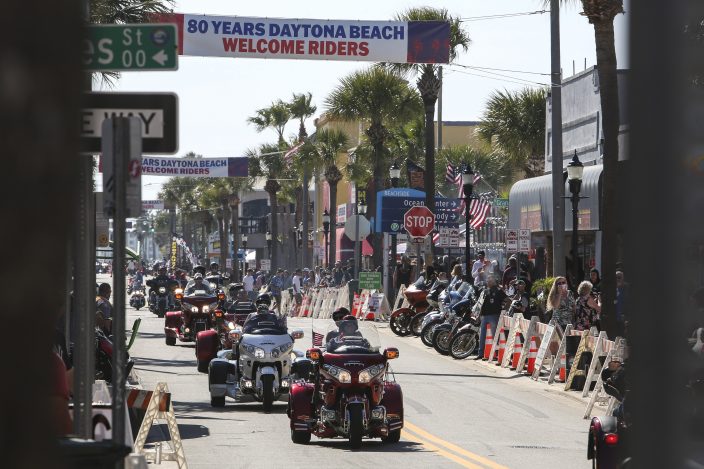 Bikers ride up and down Main Street in Daytona, Fla., during the starting day of Bike Week on Friday, March 5, 2021. (Sam ThomasOrlando Sentinel via AP)

“It really attacked him, and he had to have caught that here,” he said. “So I haven’t been in a restaurant since.”

At John’s Rock N Ride souvenir store, owner Johnny Sanchez was selling a lot more $3 beers than the designer masks he offered for $7. Almost no one is wearing them.

“As far as masks are concerned, they are paying little attention to that,” Sanchez said, with a shrug. “It’s just the way it is. What can you do?”

The 12 jurors deliberating in the trial of Derek Chauvi ...

The jury deliberating in the trial ...