Each morning, Brandy Wilber wakes up to a sweeping view of the desert and the sound of gypsum being crushed at the plant. This is life in Empire.

“It might not seem like much to other people, but this is our home. It’s a lot more than just home: It’s home, it’s work, it’s family,” said Wilber, who manages the general store in town.

In recent weeks, the town of Empire has been made famous by “Nomadland,” a film that won best picture and best director at the Golden Globes Awards on Sunday. The film is now in theaters and streaming on Hulu. 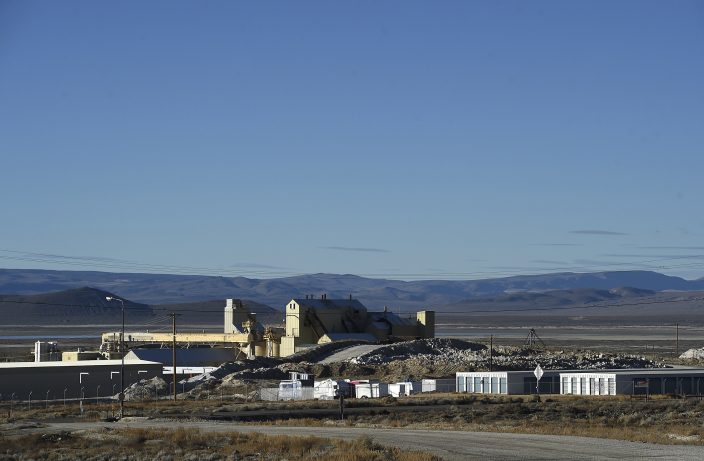 A gypsum mine in Empire, Nevada is pictured in this photo taken in 2016. The town about 90 miles north of Reno was where actress Frances McDormand's character sets out from in the award-winning film "Nomadland." (Jason BeanThe Reno Gazette-Journal via AP)

Wilber, who stars in the movie briefly with her daughters as a friend of the main character, acted as a town liaison for the crew.

Like many of the film’s cast, Wilber is one of the Northern Nevada locals that starred as herself. The director, Chloé Zhao, is known for blending fiction with reality in her films. “Nomadland” is no different.

Empire serves as the home in the rearview mirror of the main character, Fern, played by actress Frances McDormand. As the movie opens, Fern is setting out on a journey to find a new lifestyle and purpose after the company town she lived in with her late husband is shutdown. Fern is fictional, though both her story and Empire’s are rooted in truth. 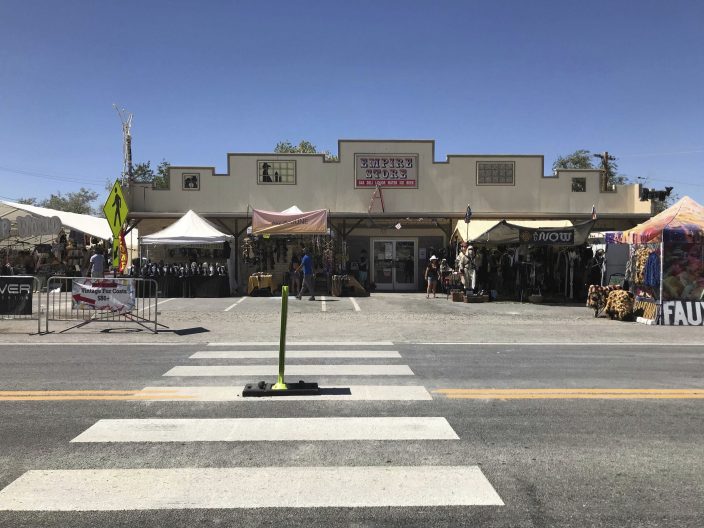 The general store in Empire, Nevada is pictured in this photo taken in August 2019. The town about 90 miles north of Reno was where actress Frances McDormand's character sets out from in the award-winning film "Nomadland." (Jenny KaneThe Reno Gazette-Journal via AP)

Today, the town is home to a general store, a gas pump, a storage business and the gypsum mining operations, which -- true to the movie’s plot -- closed in 2011. The operations resumed in 2016, but not to the level of their heydays in the 20th century.

Travelers can best mark their arrival in Empire when they see the company factory. The plant “rises like a giant white frosted cake from the desert,” a journalist from the Nevada State Journal wrote in 1953. 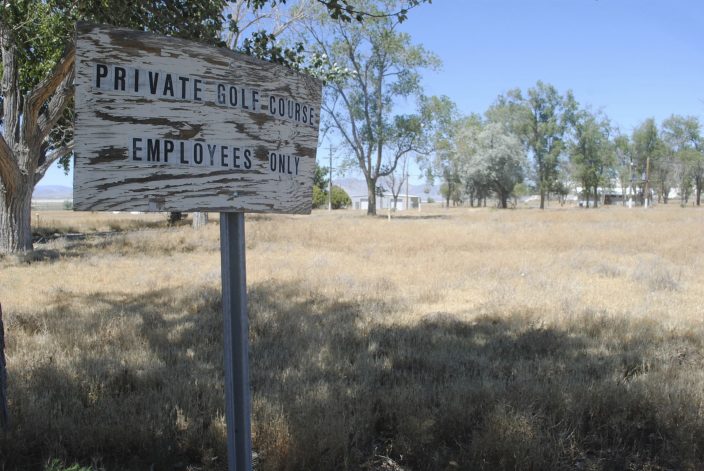 A sign at the golf course to the town of Empire, Nevada is pictured in this photo taken in June 2016. The town about 90 miles north of Reno was where actress Frances McDormand's character sets out from in the award-winning film "Nomadland." (Jenny KaneThe Reno Gazette-Journal via AP)

In the early 1920s, the Pacific Portland Cement Company operated the gypsum quarry and mine. Gypsum is commonly used for plaster board, or Sheetrock, used in construction. Empire was said to be home to one of the “finest gypsum deposits in the world,” the Nevada State Journal reported at the time, and the U.S. Gypsum Company bought the operation for more than $2 million in 1948.

By 1950, the town was booming with workers mining around the clock, the Journal reported, and adding housing to support about 200 people, including workers and their families. The town of Gerlach, best known today as the last stop before Burning Man, was just a few miles north. Gerlach townspeople called Empire simply “the camp.”

“Nearby Gerlach is experiencing a small boom of its own as a result of the growth of Empire, as is reflected in the advent of electric power and neon signs in that community during the last year,” the Journal reported in 1950. “Gerlach is Empire’s play town to some extent, although it is probable if things go on as they are now that Empire will be bigger than Gerlach soon.” 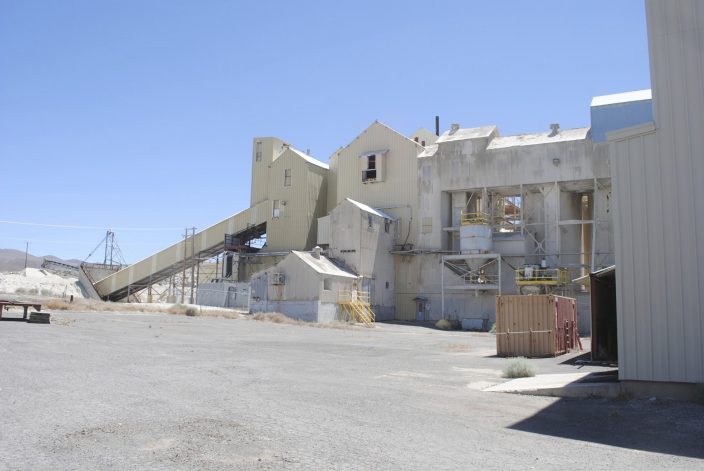 The gypsum mine facility in the town of Empire, Nevada is pictured in this photo taken in 2016. The town about 90 miles north of Reno was where actress Frances McDormand's character sets out from in the award-winning film "Nomadland." (Jenny KaneThe Reno Gazette-Journal via AP)

At the time, neither community had telephone service still, but residents were said to love life in Empire.

They described a tight knit community where the kids ran free and swam all summer in the community pool. The parents enjoyed golf at the course in town and tennis at the courts.

The entire community would gather for basketball tournaments, and the children would go rabbit hunting after school since the desert was only “five feet 5 feet (1.5 meters) from our backyards,” a former resident, Steven Lambert, once told the Reno Gazette Journal.

USG shut down all operations, both mining and Sheetrock production, in early 2011 after the economic downturn tanked the construction industry. At the time, USG employed about 100 people and ran the town of Empire, which had about 300 residents when it closed.

In years past, the town’s population was as many as 800, but with an evaporated population, Empire lost its zip code: 89405.

The school in Gerlach struggled to keep enough students to stay open. Enrollment in recent years has hovered between 10 and 40 students, depending on the year.

The town of Empire lost much of its charm as well. While surrounded by a chain link fence, the facilities suffered neglect.

Two llamas -- named Tony Llama and Llama Bahama -- were placed inside the perimeter to keep the weeds at bay.

Bushes entirely engulfed basketball hoops, swing sets and laundry lines left behind by the former residents. Inside the homes, many which were left unlocked, walls had the faint outline of frames that once hung. Bedrooms still had glow-in-the-dark stars, murals and kitten-shaped light switch covers left behind.

“Some of the old mill offices, if you go over there, the calendar is still on that date, the day that it shut down in 2011,” said David Hornsby, president and chief operating officer of Empire Mining Co. when he moved to the site in 2016. “Still half-full coffee cups, all their files still on their desk. It’s kind of like a bomb just went off and they all evacuated. It’s pretty weird.”

Empire Mining Co., based in Las Vegas, bought the town, plant and mine in 2016 for nearly $11.4 million. Unlike USG, Empire Mining Co. does not have manufacturing on-site. The gypsum is today shipped to companies that make fertilizer and cement.

Today, the town is home to about 70 residents altogether, including workers and their families. While many of the facilities have not reopened, about two dozen houses have been remodeled.

Wilber said, though the town still might look abandoned from afar during the winter, it regains some of its vitality in the summer. No matter the season, though, the llamas still roam the town and greet her each morning at her window for oats. She’s nicknamed them Mo and Jo.

“I would have loved to have seen the town back in the day, but I think a lot of people that live in Empire now have that same feeling: We love this place,” Wilber said.