“If you’re going to have a chance, you’ve got to string together wins," coach David Quinn said. “You got to go on some sort of streak and some sort of run. We really hadn’t done that up to this point. We’re creeping up on the halfway point of the season so our guys realize what’s in front of us. They realize that with each passing day, you want to continue to gain momentum and continue to move forward.” 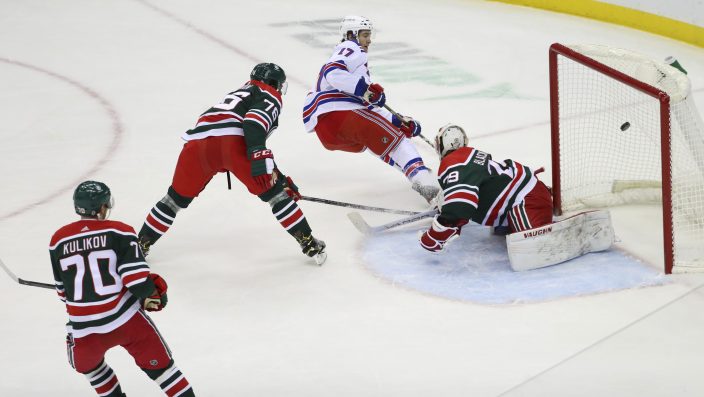 Alexandar Georgiev had 24 saves while filling in for the injured Igor Shesterkin, who sustained a groin injury in a 6-1 win over New Jersey Thursday night.

P.K. Subban and Mikhail Maltsev scored in a 17-second first-period span to give the slumping Devils some hope after falling behind 2-0.

The hope lasted less than two minutes. Rooney, a former Devil who signed with New York this season, capped a 2-on-1 with Chytil flipping a cross-ice pass over Mackenzie Blackwood for a 3-2 lead. 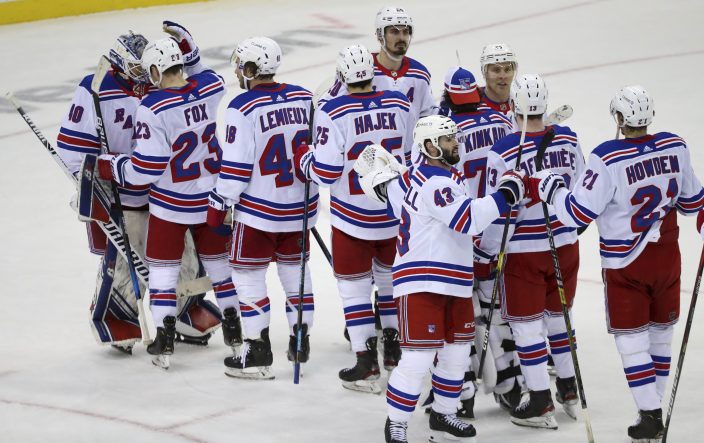 Hajek stretched the lead to two goals 65 seconds in the second period with a short that deflected off Devils forward Janne Kuokkanen. It was his first point of the season and first goal since getting his first in the NHL against New Jersey on Mar. 9, 2019.

Chytil scored in close in the third period as the Rangers scored 12 goals in sweeping the two games against their Hudson River rivals.

Nathan Bastian closed the gap to 5-3, but Strome iced the game with an empty net goal. 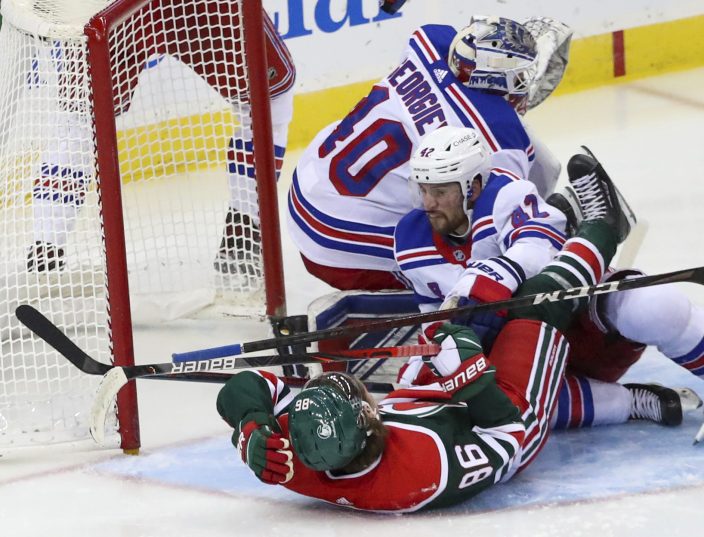 “If we’re going to play like that, we’re going to lose, we’ll lose every night,” Devils coach Lindy Ruff said. “Our puck play wasn’t good, our attention to detail wasn’t good enough. We had some 50-50 battles that I you know I believe that we could have won, that we didn’t. The desperation I think along the walls to compete, no situation, was good enough.”

What's impressive about the Rangers' current run is they are winning with top forward Artemi Panarin (personal leave) and top defenseman Jacob Trouba (broken thumb) sidelined, and Chytil just returning to the lineup.

Strome said the Rangers have worked hard all season but could not string together wins. 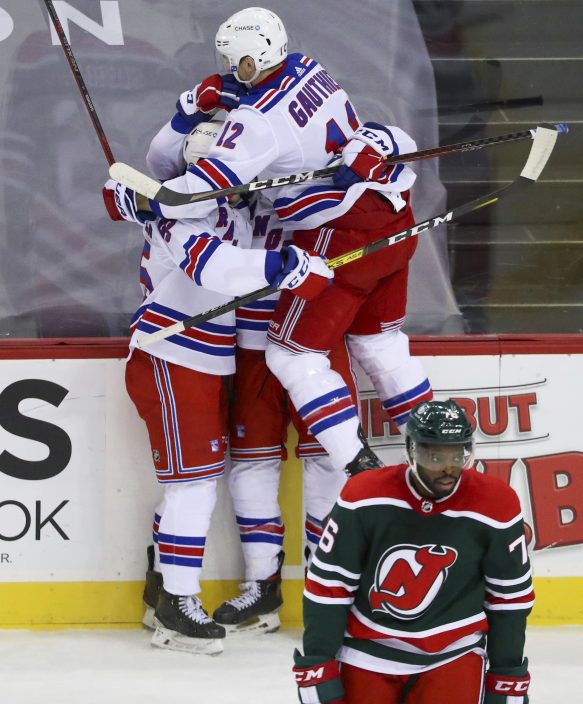 New Jersey Devils defenseman P.K. Subban (76) skates back to the bench as the New York Rangers celebrate a goal by center Kevin Rooney (obscured) during the first period of an NHL hockey game in Newark N.J., on Saturday, March 6, 2021. (Andrew MillsNJ Advance Media via AP)

“I think lately we’re finding a way,” he said “I don’t think the last two wins were pretty. But today was a pretty solid effort. I think all around we got to be pretty pleased with, the contributions of everyone. Just a solid game.”

The Rangers caught a break early when Devils defenseman Sami Vatanen was called for a double minor for high sticking 1:33 into the contest.

Fox gave New York the lead 33 seconds later, scoring on a length of the ice rush. Strome got his seventh of the year in close after a turnover in the Devils' end. 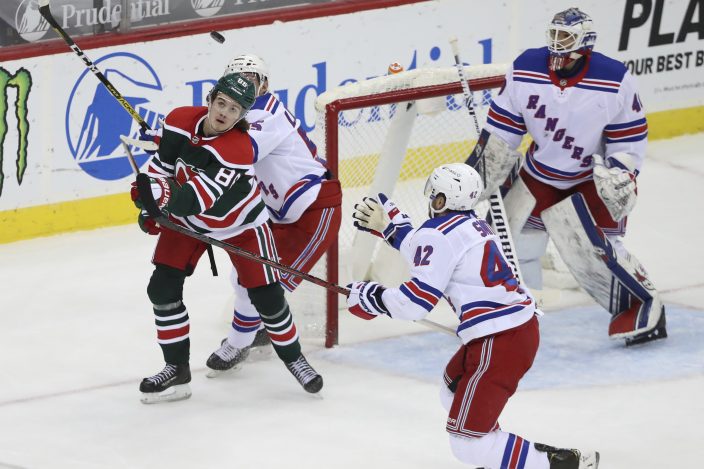 The Devils are 2-9-1 at home after losing all five games on the stand that ended Saturday. The last time they lost five straight at home was 2000-01 when they dropped six in a row early. Remarkably, they went to the Cup Final that year and lost to Colorado in seven games. 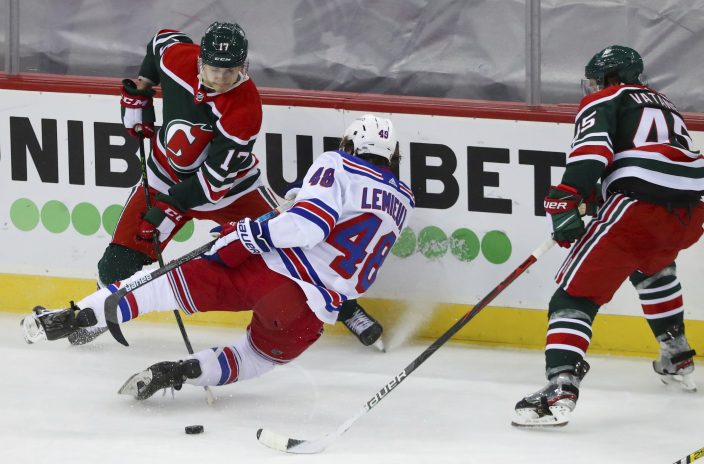 NOTES: F Kaako Kappo returned to the Rangers' lineup after missing the last six games because of COVID-19. He had an assist on the Strome's first goal. ... With Shesterkin sidelined, former Devil Keith Kinkaid was the Rangers backup. ... Devils C Michael McLeod did not play for the first time this season. ... Georgiev picked up an assist on the Fox goal. ... The Devils signed F Graeme Clarke signed a three-year, entry-level contract starting in the 2021-22 season. The 19-year-old was a third-round pick in the 2019 draft.

Rangers: At Pittsburgh Sunday and Tuesday for the second stop in six-game road trip that ends with two in Boston. 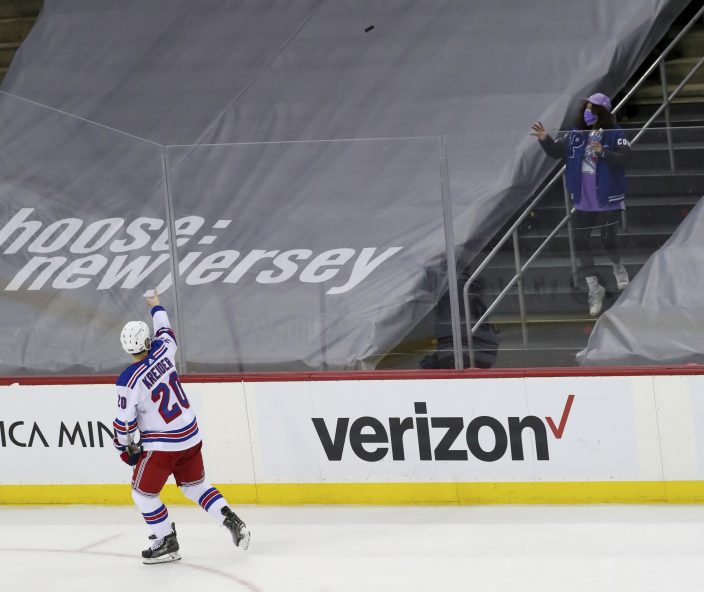 Devils: Travel to Boston to face the Bruins in the opener of the three-game road trip that includes stops in Washington and in New York against the Islanders.