Tensions were raw ahead of midnight as Republican leader Mitch McConnell rose in the Senate for the purpose of publicly ridiculing Majority Leader Chuck Schumer over the daylong delay as Democrats argued among themselves over the $1.9 trillion COVID-19 rescue package.

But 12 hours later, it was Schumer, D-N.Y., reveling in the last word, an unabashedly upbeat “help is on the way” to Americans suffering through the pandemic and lockdowns as the Senate prepared to approve the massive package without a single GOP vote.

Senate passage of the sweeping relief bill Saturday puts President Joe Biden’s top priority closer to becoming law, poised to unleash billion for vaccines, $1,400 direct payments and other aid, and shows Schumer, in his first big test as majority leader, can unify the ever-so-slim Democratic majority and deliver the votes. 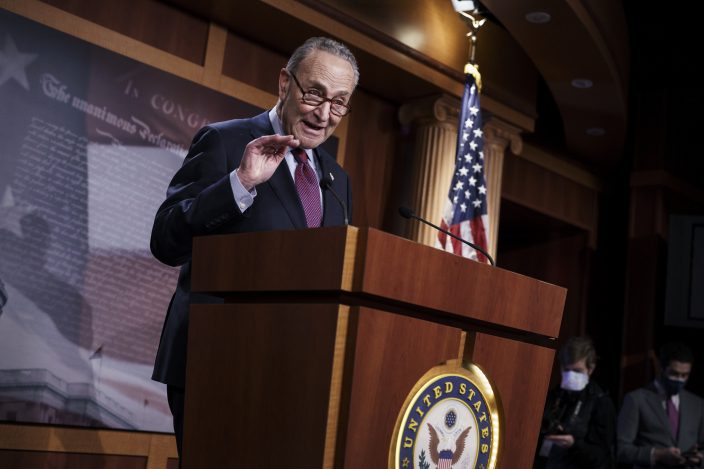 Senate Majority Leader Chuck Schumer, D-N.Y., praises his Democratic Caucus at a news conference just after the Senate narrowly approved a $1.9 trillion COVID-19 relief bill, at the Capitol in Washington, Saturday, March 6, 2021. Senate passage sets up final congressional approval by the House next week so lawmakers can send it to President Joe Biden for his signature. (AP PhotoJ. Scott Applewhite)

“Lessons learned: If we have unity, we can do big things,” Schumer told The Associated Press in an interview after the vote.

The outcome “gives us optimism about doing more big things in the future — because it worked,” he said.

Stewardship of the massive pandemic relief package was an inaugural foray of the new power dynamics of Washington, testing Democratic control of the White House and Congress for the first time in a decade, and setting the foundation for what’s possible for Biden’s agenda. 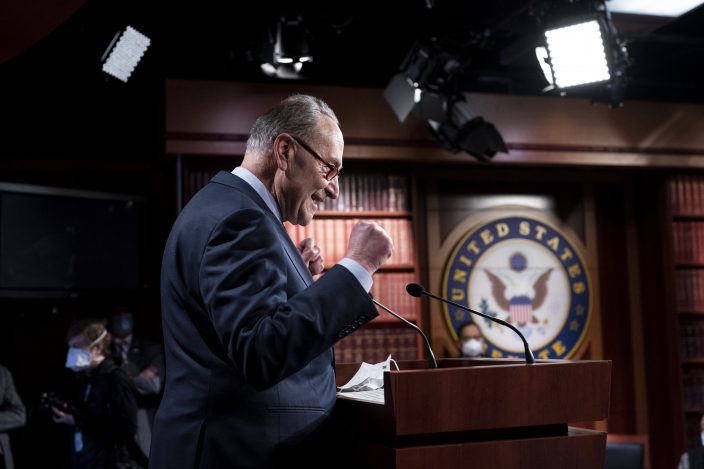 Senate Majority Leader Chuck Schumer, D-N.Y., praises his Democratic Caucus at a news conference just after the Senate narrowly approved a $1.9 trillion COVID-19 relief bill, at the Capitol in Washington, Saturday, March 6, 2021. Senate passage sets up final congressional approval by the House next week so lawmakers can send it to President Joe Biden for his signature. (AP PhotoJ. Scott Applewhite)

So much of Biden's success or failure depends on the Senate, where Democrats are in command of an evenly split chamber, 50-50, a majority so delicate that any one senator can upend the legislative agenda. While Vice President Kamala Harris is able to break tie votes, Schumer has zero slack if Republicans are opposed, voting lockstep as they did Saturday against the virus aid as bloated and unnecessary. One key centrist, Sen. Joe Manchin, D-W.Va., wavered over an unemployment provision, throwing the proceedings into chaos before a grueling all-night session.

Biden has been telling senators privately their vote on pandemic aid will build momentum for the next priorities. An ambitious infrastructure package is emerging, part of his “Build Back Better” campaign agenda, to bring roads, broadband and green-energy projects nationwide. He and Schumer spoke often as the Senate leader steered the pandemic aid to approval. It's now headed back to the House for a final vote, as soon as Monday.

While no senators appeared ready to tank Biden’s top priority, the next votes could prove more difficult.

“There’s a whole series of issues that that quite a few of us were discussing,” said Sen. Chris Coons, D-Del., a Biden ally eager for bipartisanship, who spoke to the president a few minutes after the vote.

“This was a reminder yesterday that, in a 50-50 Senate, if any one member changes their mind on an amendment, or vote or an issue, it can change the outcome," Coons said.

Voting rights, immigration law changes and other bills will be subject to filibuster rules that require 60 votes for passage, rather than 51, a potentially impossible hurdle in the face of Republican opposition that is stoking calls to change the process to ensure Biden’s priorities don’t flame out.

“We’re going to have to have discussions about that,” said Sen. Debbie Stabenow, D-Mich., a member of leadership.

But that tough topic was for another day. On Saturday, Democrats elbow-bumped and cheered in the chamber — Stabenow said some were almost in tears -- as they ushered the massive aid package they had promised voters to approval. With 10 million jobs lost and countless schools and businesses shuttered, it includes $300 a week in extra unemployment benefits, money school reopenings, eviction protections and small business assistance.

“Only 45 days after Joe Biden became president of the United States, to be able to do something so big, and so significant, that fundamentally is the glue for us,” she said.

Sen. Sherrod Brown, D-Ohio, said it was the “best day” he’d ever had in the Senate. That biting speech from McConnell, R-Ky., poking at Democrats' temporary disarray? Brown dismissed it as cynical and unsubstantial.

McConnell led Republicans to put up a blockade of opposition, reviving a strategy used the last time Democrats held the sweep of power, when Barack Obama was president, against the 2009 financial crisis rescue package.

After Donald Trump won the White House, McConnell and Republicans controlling Congress with only a slightly thicker Senate margin used similar procedural tools to pass the $2 trillion GOP tax cuts on a party-line vote in 2017. Their effort to repeal and replace the health care law known as “Obamacare” fizzled when Sen. John McCain and two other Republicans voted with Democrats, and McConnell was unable to hold his party together.

From his stately office off the Senate floor, with the lived-in feel of the rumpled New Yorker, Schumer pulled out his not-so-secret weapon, the flat flip-phone, which he uses for his constant calls keeping in touch with senators on their votes.

"Every member of our caucus, from Bernie Sanders to Joe Manchin, realize that we had to pull together, that if we failed, we’d all be hurt,” Schumer said, referring to the liberal-most senator from Vermont and the centrist from West Virginia.

As Manchin hesitated, Schumer called him, as did other senators, and even Biden. But Manchin also had time — hours dragged on — to make up his mind.

“He listens to everybody and then he puts it together,” Brown said of Schumer. “He’s good at it.”

When the votes were being tallied Saturday, Schumer spotted the two new senators from Georgia, Jon Ossoff and Raphael Warnock, and pointed at them. They had stunned the political world by defeating two Republican incumbents in special elections in January that delivered Democrats the majority.

“The people of Georgia deserve a great deal of credit for what happened here today,” Warnock said afterward. “Had they not stood up in such a powerful way, in this historic election that sent Jon Ossoff and myself to the Senate, we simply would not be here.”

Schumer urged the presiding officer to announce the vote, 50-49. One Republican senator was absent for a family matter. Harris was not needed to break the tie.

Schumer turned to his senators and said, “We are a great team.”