A look at what’s happening in European soccer on Sunday:

Already a huge favorite to win the Premier League, Manchester City can virtually ensure a procession to the title in the final weeks of the season by beating Manchester United in the derby at Etihad Stadium. City has a 14-point lead over third-place United — and 12 points more than second-place Leicester — and is on a remarkable 21-match winning run in all competitions. United has won just two of its last eight games in the league, dropping out of realistic contention for the title and maybe seeing its place in the top four threatened. United is unbeaten in 21 away games stretching back to January last year. Liverpool is on a five-match losing streak at home ahead of the visit to Anfield of Fulham, which is looking to climb out of the relegation zone. Fellow relegation rivals West Bromwich Albion and Newcastle meet, while Tottenham hosts Crystal Palace. 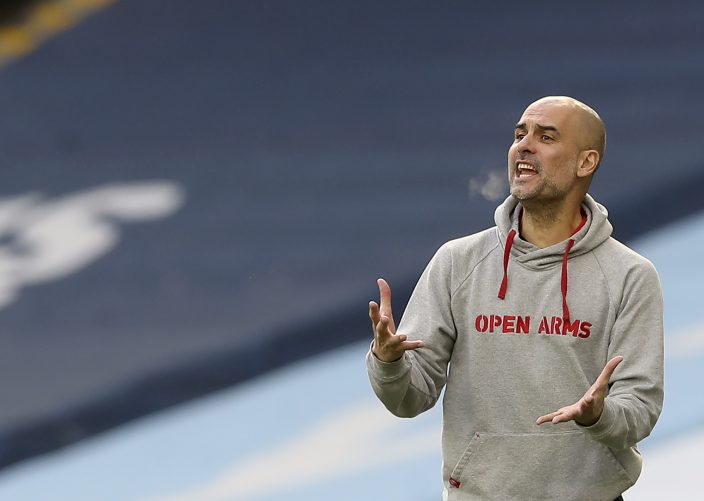 Atlético Madrid hosts Real Madrid in a Spanish capital derby that will leave its mark on the title chase. Atlético leads the league and is aiming to leave its city rival eight points adrift in third place with a victory. However, a win by defending champion Madrid would keep it a three-team race with Barcelona in second place at just two points behind Atlético. Karim Benzema has returned to Madrid’s squad after an injury but coach Zinedine Zidane has not revealed if his striker is ready to start. Also, Athletic Bilbao hosts Granada hoping to build on its win over Levante this week that put it into the final of the Copa del Rey for a second consecutive season. Real Sociedad welcomes Levante with the hosts unbeaten in six rounds and seeking to close in on fourth-place Sevilla.

A hip problem has added Ante Rebic to a long injury list for second-place AC Milan ahead of its visit to Hellas Verona. With Zlatan Ibrahimovic, Mario Mandzukic and Hakan Calhanoglu already unavailable, the Rossoneri will need to find new scoring sources in order to revive its title hopes. After failing to win three of its last four games, Milan is desperate for a victory to put pressure on city rival Inter Milan, which tops the table and is six points ahead. Inter plays Atalanta on Monday. Fifth-place Roma hosts Genoa looking to get back into the top four and the Champions League spots, while Napoli hosts Bologna.

Arminia Bielefeld’s quest for Bundesliga survival under new coach Frank Kramer begins with a visit from Union Berlin. Bielefeld’s decision to fire Kramer’s predecessor, Uwe Neuhaus, surprised many. But Bielefeld hasn’t won any of its last five games and conceded at least three goals in each of them. Kramer’s first task will be to address Bielefeld’s leaky defense, a job made harder by Max Kruse’s return for Union. The former Germany striker scored a penalty on his return in Union’s 1-1 draw with Hoffenheim last weekend. Two of Bielefeld’s relegation rivals, Cologne and Bremen, meet earlier Sunday.

Lille clinched a remarkable league and French Cup double 10 years ago with Belgium star Eden Hazard in the side, beating Paris Saint-Germain in the Cup final. The following month PSG was bought by Qatari investors and it has dominated almost every domestic season since. But this year Lille has surged back into contention under inspirational coach Christophe Galtier, whose ultra-consistent side tops the French league from PSG and is on course for another double providing it wins at fourth-tier Corsican side GFC Ajaccio. Marseille is also trying to reach the last 16 of the competition and visits another fourth-tier side in Canet-en-Roussillon. Goalkeeper Steve Mandanda and winger Florian Thauvin have been rested for the match.