What’s that piece of advice Little League coaches always tell their kids -- keep your eye on the ball, right?

Trevor Bauer provided a new twist on that idea.

Eager to challenge himself in a spring training start, the new Los Angeles Dodgers ace kept his right eye closed while pitching out of a first-inning jam Saturday. 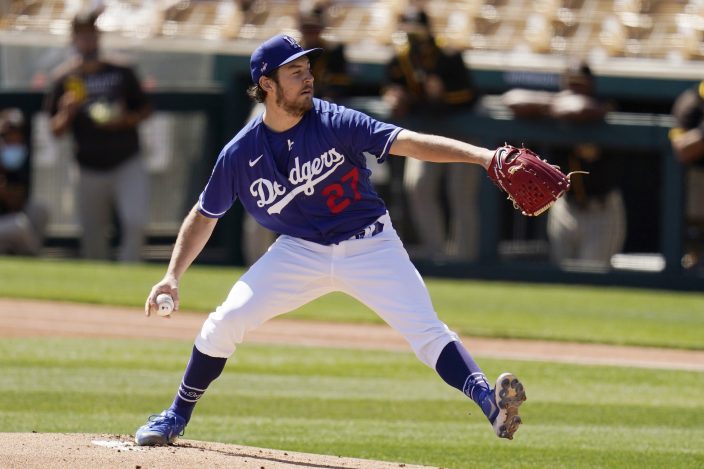 He even pointed to the eye as he walked off the mound.

“I like making myself uncomfortable and throwing different stuff my way and trying to find a solution for it,” the NL Cy Young Award winner told Los Angeles media.

“I think that’s how you improve. Find a way to make yourself uncomfortable and get comfortable with it and then do it again,” he said. 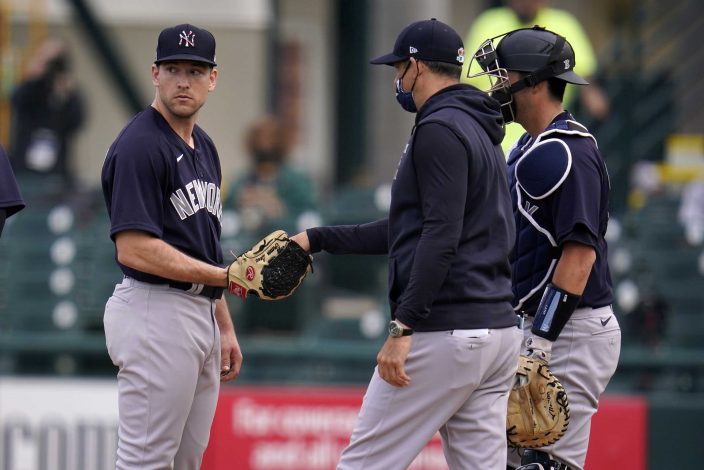 After giving up a single to San Diego leadoff man Jurickson Profar and then walking Tommy Pham, Bauer posted a shutout. Eye closed, he retired the next three batters.

Bauer wound up pitching three scoreless innings with the creative approach, striking out three while allowing two hits and a walk. 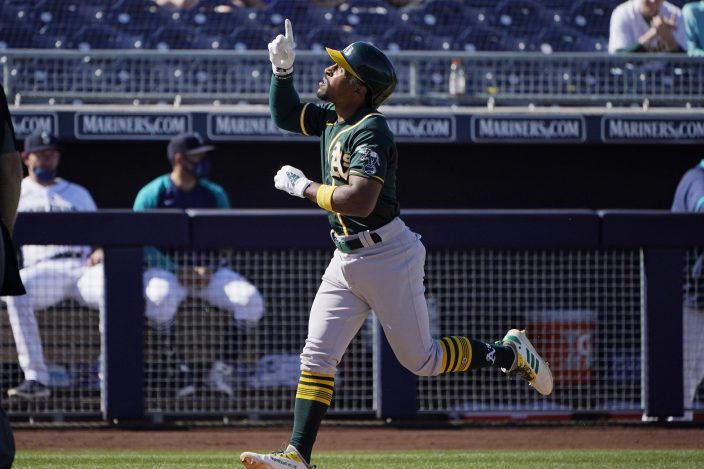 Oakland Athletics' Tony Kemp gestures as he runs toward home plate on a solo home run during the sixth inning of the team's spring training baseball game against the Seattle Mariners, Saturday, March 6, 2021, in Peoria, Ariz. (AP PhotoSue Ogrocki)

Earlier in the week, fresh off signing a $102 million, three-year contract after leaving the Cincinnati Reds, he threw two shutout innings in his exhibition debut.

Known for speaking his mind and going his own way, Bauer said he regularly shuts one eye during bullpen sessions and other workouts. 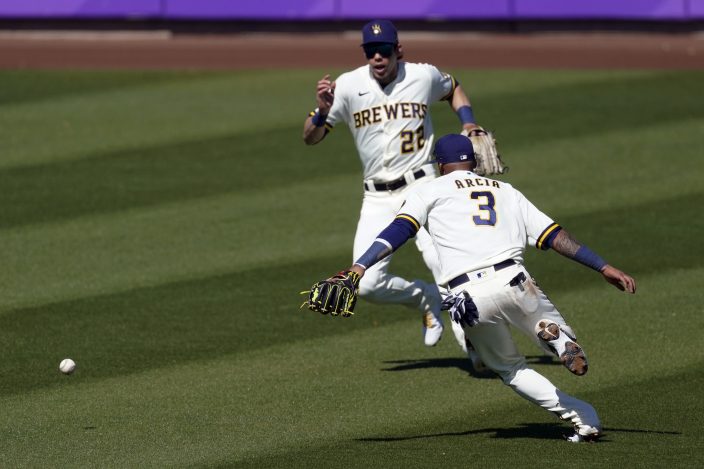 “I did notice. It was the right eye closed on a handful of pitches,” he said. “I guess when he can’t get his command that kind of recalibrates him. I think there might have been one curveball I think he did with both eyes closed.” 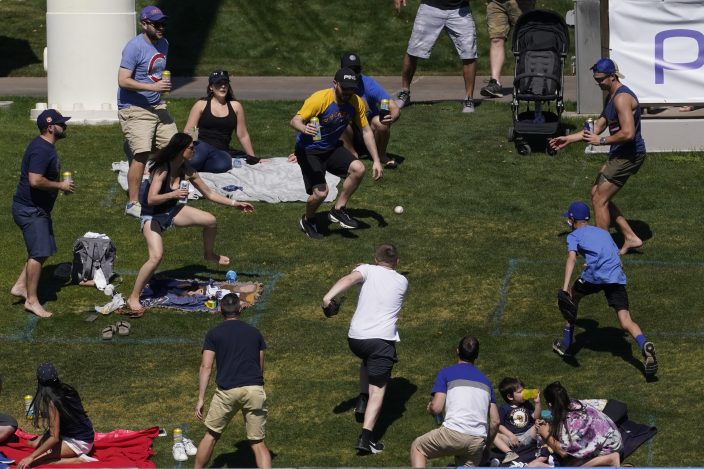 Matt Davidson doubled and singled for the Dodgers.

Jacob deGrom pitched two scoreless innings in his spring debut, striking out three and allowing one hit. The two-time NL Cy Young Award also got the word, not that there was any doubt, that he'd start on opening April 1 at Washington.

Greinke gave up two hits in his only inning.

Patrick Corbin made his first start for Washington, pitching two innings and allowing a run on two hits while striking out three. Yan Gomes and Andrew Stevenson had RBI singles for the Nats.

Sandy Alcantara made his second start for Miami, striking out six in 2 1/3 innings. He gave up two hits and two walks. Garrett Cooper homered and Jesus Aguilar had an RBI single.

Odúbel Herrera singled, took third on Alex Bohm's double and scored on a wild pitch for Philadelphia's only run.

New York manager Aaron Boone returned to the dugout, three days after surgery to have a pacemaker inserted. Boone, who turns 48 in a few days, returned to camp after clearing COVID-19 protocols and said he felt great.

Jameson Taillon made his first start for the Yankees, pitching against the team that traded him to New York this winter. He struck out four over two scoreless innings. Jay Bruce and Clint Frazier homered.

Gregory Polanco homered and had three hits for Pittsburgh. He already has eight RBIs in exhibition play. Cody Ponce, competing for the final spot in the rotation, made his first start. Ponce worked an inning, surrendering Bruce's home run and walking two.

Reynaldo Lopez retired all six batters he faced in the start for the White Sox. Five pitchers combined to shut out the Indians on three hits.

San Francisco starter Johnny Cueto struck out four of the seven batters he faced in his two innings. Evan Longoria doubled and drove in three runs and Donovan Solano homered for the Giants.

Shelby Miller struck out three in the two-inning start for the Cubs and Joc Pederson hit his second homer of the spring.

Brett Anderson walked one and struck out two in the one-inning start for Milwaukee and Josh Lindblom followed with two solid innings of relief, striking out three and allowing one hit.

Brewers infielder Luis Urías has a hamstring issue and won't play in the next game.

“We’ll have him run around the field, most likely run and then take a day of batting practice and groundballs,” manager Craig Counsell said. “But I feel confident. I mean, right now, we’re just going to make him day to day."

Urías batted .239 with 11 RBIs and a .308 on-base percentage in 41 games last season while playing mostly third base but also making appearances at second base and shortstop. The Brewers are giving him a chance to compete for the starting shortstop job this spring.

Jose Quintana started for Los Angeles and struck out four of the seven batters he faced over two hitless innings.

Dereck Rodriguez worked three innings in the start for the Rockies, giving up a two-run homer to Jo Adell.

Seattle announced before the game that outfielder Jarred Kelenic, one of the top prospects in baseball, will be sidelined due to a strained adductor muscle in his left knee. No timeline was given for his return.

Ronald Guzman hit a solo home run and Rougned Odor had a two-run double for Texas.

Zac Gallen worked three strong innings in the start for Arizona, allowing a hit and a walk while striking out three. Ketel Marte doubled twice and scored a run.