Walter Gretzky’s family thought the end was coming quickly in the middle of February.

The father of hockey’s greatest player had suffered a serious hip injury and, after battling Parkinson’s disease and other health issues in recent years, his time — something Walter was always willing to give both friends and strangers — appeared to be running short.

“But he had a love for life and he didn’t want to leave,” Wayne Gretzky said during an emotional eulogy Saturday. “We were 21 days sitting with him and just enjoying life. We got a chance and opportunity to tell stories.” 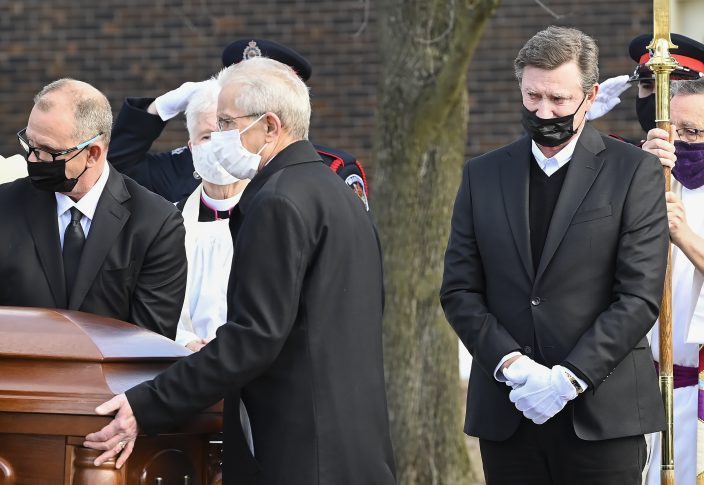 And Walter Gretzky’s life was full of them.

Known as Canada’s hockey dad, Walter Gretzky died Thursday at age 82. His death prompted an avalanche of tributes for a genuine, approachable, authentic person who nurtured Wayne’s incredible talents on the family’s famed backyard rink in Brantford, but also never forgot where he came from.

“He was a remarkable man who loved life, loved family,” Wayne Gretzky said. “We’d be a way better world if there was so many more people like my dad. Very special, we’re all hurting.” 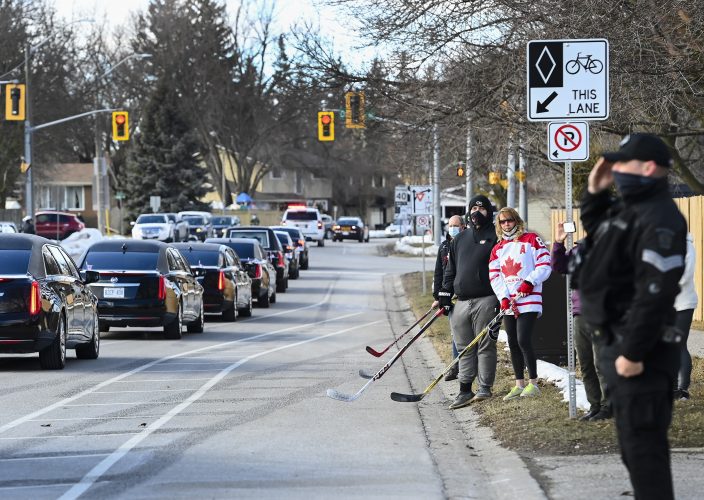 Due to COVID-19 restrictions, the funeral service was limited to family. But hundreds of people — including many kids wearing Gretzky jerseys — gathered outside St. Mark’s Anglican Church in this city about 60 miles west of Toronto.

“A tough time,” said Wayne, his voice beginning to crack and tears welling in his eyes. “I’m so proud of the fact that so many people have reached out and given him such great tributes, because he deserves it. He has the heart of gold.”

Walter was there every step of the way as Wayne ascended to a greatness that included four Stanley Cups with the Edmonton Oilers and becoming the NHL’s career time leader in goals, assists and points. An employee with Bell for more than three decades — and long after his son became the sport’s biggest star — Walter remained a loving, blue-caller symbol of devotion.

“A deeply humble man,” said Rev. Dr. Tim Dobbin, who officiated the funeral broadcast live on TSN and streamed on Sportsnet.ca. “He spoke the truth. Wally’s word was his bond.”

A video tribute towards the end of the service included pictures from the early days on the backyard rink, Wayne’s triumphs, Walter on the ice teaching kids, the Gretzky memorabilia in the family home, and highlights from his son’s final games in the NHL. 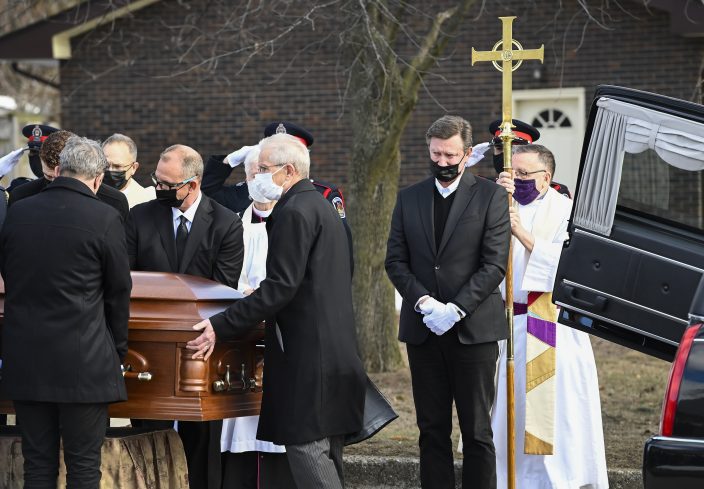 Hockey hall-of-fame legend Wayne Gretzky, second right, cries as he watches the casket of his father, Walter Gretzky, be carried from the church during a funeral service in Brantford, Ontario, on Saturday, March 6, 2021. Walter Gretzky also know as Canada's hockey dad was 82 years-old. (Nathan DenetteThe Canadian Press via AP)

As the casket was about to be led out of the church and into the sunshine, “The Hockey Theme” song made famous on “Hockey Night In Canada” was played.

And the moment Walter’s funeral procession pulled away from the church — the building’s sign read “We Will Miss You Wally” — some of the jersey-clad kids waiting outside tapped their hockey sticks on the pavement in unison.

A fitting send off for Canada’s hockey dad.