Ridden by Hall of Famer Mike Smith, Life Is Good led all the way, and despite drifting out very wide through the stretch, was timed in 1:42.18 over 1 1/16 miles. Smith blamed the infield video board for distracting the colt.

“When the big screen is lit up, they can see it,” he said. “In the mornings, he goes by the screen like it’s nothing because it’s not on. He was locked on it down the lane. I had a strong hold on him down to the wire, just holding onto him, making sure that he stayed straight.” 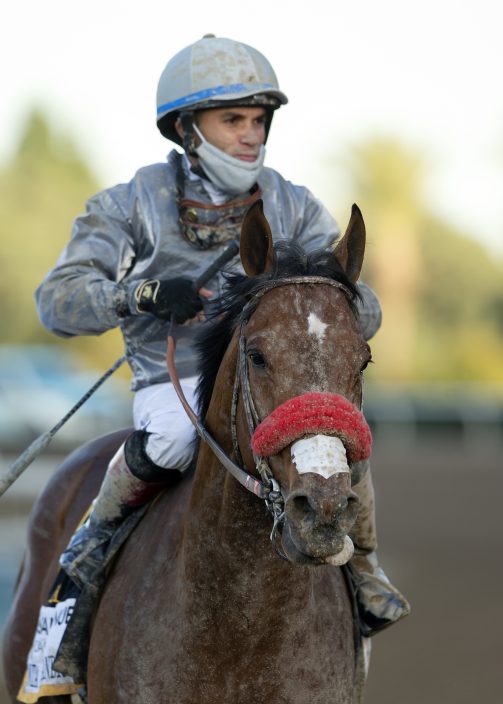 In a photo provided by Benoit Photo, jockey Joel Rosario guides Idol to the winner's circle after their victory in the Grade I, $400,000 Santa Anita Handicap horse race Saturday, March 6, 2021, at Santa Anita in Arcadia, Calif. (Benoit Photo via AP)

Life Is Good earned 50 qualifying points for the Kentucky Derby, and he has 60 total, which assures him of a berth in the May 1 race that Baffert has won six times. The trainer earned his record eighth win in the San Felipe.

“I always thought he would be a super horse,” Baffert said, “but at the quarter pole, I could tell he was just still cruising, just doing it easy.”

Life Is Good is undefeated in three career starts, with earnings of $274,200, and will be pointed toward the Santa Anita Derby on April 3.

In the $400,000 Santa Anita Handicap, Idol rallied wide turning for home to win by a half-length.

Express Train returned $5.40 and $2.80. Maxfield, the even-money favorite, was another 1 1/2 lengths back in third and paid $2.40 to show in having his five-race winning streak snapped.