China’s exports surged 60.6% over a year earlier in the first two months of 2021, after factories reopened and global demand started to recover from the coronavirus pandemic.

Chinese authorities combine trade data for the first two months to compensate for fluctuations due to the Lunar New Year holiday, which falls at different times each year in January or February. Factories shut down for up to two weeks, then restock after they reopen. 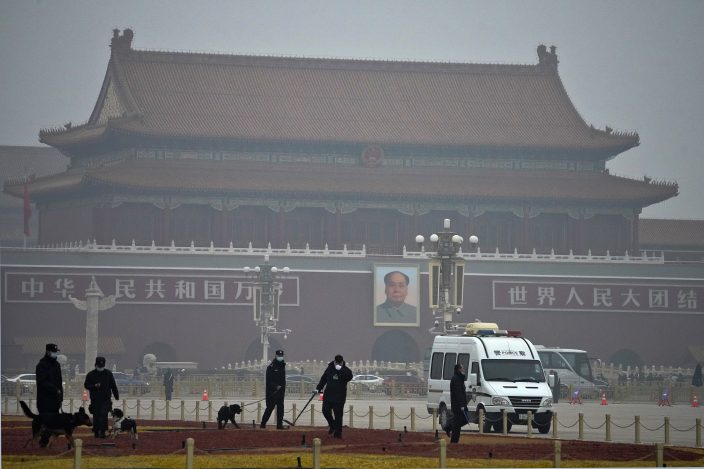 Police officers use sniffer dogs to check on Tiananmen Square before delegates arrive for the opening session of China's National People's Congress (NPC) at the Great Hall of the People in Beijing, Friday, March 5, 2021. China’s No. 2 leader has set a healthy economic growth target and vowed to make this nation self-reliant in technology amid tension with Washington and Europe over trade and human rights. (AP PhotoAndy Wong)

Forecasters say the Chinese export surge should decelerate as demand for masks and other medical supplies eases and overseas competitors return to global markets. Trade officials have warned that the global situation still is “grave and complex.”

Exports to the United States soared 87.3% over last year to $80.5 billion in January and February despite former President Donald Trump’s tariff hikes imposed in a fight over trade, technology and security. They have been left in place by his successor, Joe Biden, who took office in January.

Economists and political analysts expect few changes under Biden due to widespread frustration in Washington with China’s trade and human rights records and complaints about technology theft and spying.

On Friday, China's top economic official, Premier Li Keqiang, announced plans to accelerate technology development and reduce reliance on other countries. That threatens to worsen strains with Washington and Europe, which complain Beijing violates its market-opening pledges by shielding its suppliers from competition.

The latest trade figures look especially dramatic compared with early 2020, when the ruling party shut factories to fight the virus and trade plunged.

Then, global exports tumbled 17.2% in 2020's first two months from the previous year. Exports to the United States plunged 27.7%.

Li announced an economic growth target of "over 6%” this year, which should help to propel demand for foreign oil, iron ore, food, consumer goods and other imports.

Beijing promised to buy more American soybeans, natural gas and other exports in the “Phase 1” agreement last January aimed at ending the tariff war. The two sides agreed to postpone more tariff hikes, but penalties on billions of dollars of each other's goods remain.

China fell behind on meeting those commitments but started to catch up as demand rebounded.

This year, China’s global trade surplus for January and February was $103.3 billion, compared with a $7.1 billion deficit in the same period last year.

China 2020 exports up despite virus; surplus surges to $535B

China exports rebound in April but more weakness ahead