“A book,” author Neil Gaiman may or may not have said, “is a dream you hold in your hand.” And right now, in an era of pandemic and polarization, Americans have — and need — a lot of dreams.

We dream of unfettered travel, of a world free of face masks and hand sanitizer, of days that are exciting and new and not the grinding tedium of spending hour after hour staring, horrified, at the TV news. We dream of going back to school. Of eating a meal with family. Of hugs.

And some of us — well, some of us dream of murder. Small-town murder. Gentle murder. Quiet murder. 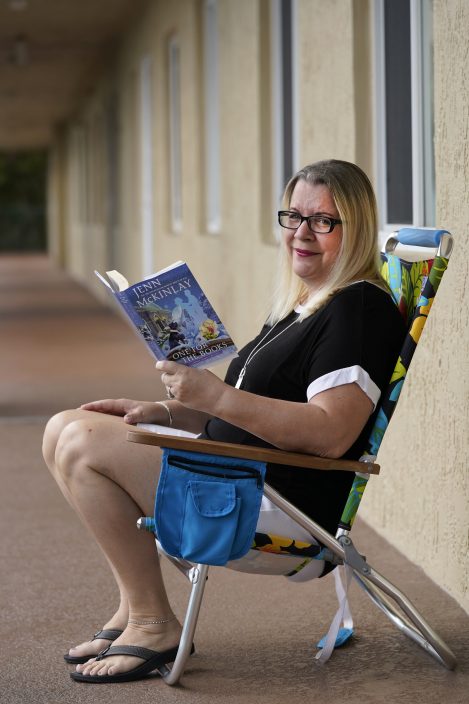 Kelly Vaiman poses for a photo along a walkway to her home where she likes to sit and read, Friday, Feb. 19, 2021, in Boynton Beach, Fla. Vaiman is an avid cozy mystery reader. (AP PhotoWilfredo Lee)

For those who find their dreams in books, there’s a group of readers who are hungrily consuming a particular style of narrative to escape from the past year's reality: “cozy” mysteries.

In an unfathomably complex year, a gently told tale of murder and mayhem whittles the sharp edges of reality to a manageable, smooth surface.

“Murder is definitely dark, but in a cozy the reader is with the protagonist every step of the way as each clue is revealed,” says Michelle Vega, executive editor of Berkley, who works with several cozy authors. “You can enjoy the perfect cup of tea and pretend you’re sitting in that comfy bookshop with the protagonist, smiling along with the banter as she and friends figure out whodunit. It is escapist perfection.” 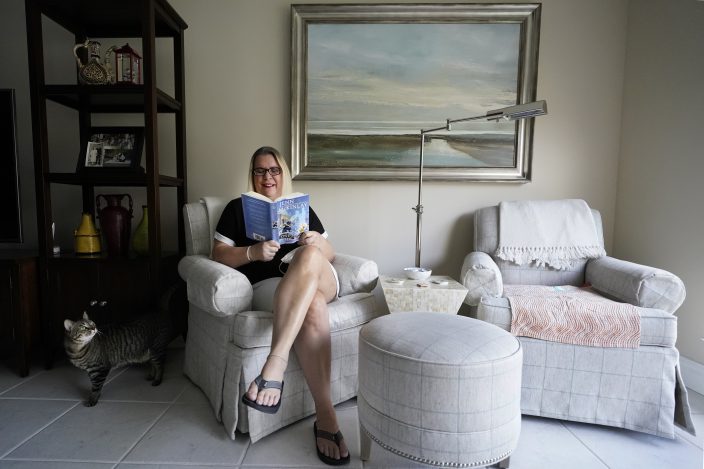 Kelly Vaiman poses for a photo in her living room where she sometimes likes to sit and read, Friday, Feb. 19, 2021, in Boynton Beach, Fla. Vaiman is an avid cozy mystery reader. (AP PhotoWilfredo Lee)

In television form, the cozy can be seen in popular shows such as “Murder, She Wrote,” “Midsomer Murders” and “Miss Fisher’s Murder Mysteries.” Cozies claim roots in early 20th-century British mysteries by such writers as Agatha Christie and Dorothy L. Sayers. But with the advent of the e-book, authors are setting their gentle crime scenes in RV campgrounds in the American South, tourist towns in the Pacific northwest and in neighborhoods in Brooklyn, to name a few.

The genre’s parameters are few: no swearing, no sex, and little to no gore. Just what the pandemic-era doctor ordered.

“The cozy mystery is a familiar way to encounter the two seemingly unreconcilable realities of death and country peace at the same time,” says Sarah Allison, an associate professor of English at Loyola New Orleans who is working on a book about “escape reading.”

“The restoration of order at the end of the novel might be less significant than the way this genre makes beautiful scenery and grisly details feel like they go together naturally,” she said in an email. Such mysteries, she says, promise a messy murder and a tidy resolution, “a welcome contrast to the way we’ve all been suspended between life as it was before COVID and life as it will be after.”

Kelly Vaiman, a longtime cozy fan, has tried to avoid thinking about real life this past year. First she was wary of going places due to the pandemic, then her elderly mother’s health declined while in a Pennsylvania nursing home. Vaiman couldn’t travel to say goodbye, and her mother died.

“After her passing, during the mourning period, I just couldn’t handle the grief,” Vaiman says. “So I’d pick up a cozy mystery to take my mind off everything.”

She estimates that she reads 120 books a year. They're not all all cozies, but those are what she turns to when she needs a comforting read.

Valerie Burns writes gentle murder mysteries under the pen name of V.M. Burns, and her “Mystery Bookshop” series is now six stories long. Since the pandemic began in early 2020, she’s noticed more readers are taking the time to email her about her work, seeking that human connection that’s sorely missing.

Burns, who lives in Chattanooga, Tennessee, is an avid cozy reader as well as a writer of them. She acknowledges the unusual nature of cozies — that they revolve around a murder yet are also soothing to read. But, she adds, trying to solve a mystery gives a feeling of accomplishment when so much of life seems stalled.

“It’s basically a puzzle, but there’s that safety net in knowing there’s not going to be a whole lot of blood and guts and violence,” she says, laughing. “It’s contradictory. A murder mystery with no violence. But I can pick up a cozy, and can figure out clues and try to figure out whodunit but I don’t have to live in all of the horror associated with true crime or a noir.”

Esi Sogah, a senior editor at Kensington Books, says she’s seen an uptick in cozy mystery sales in the past year. She believes that the genre’s settings — often picturesque small towns, quirky villages, or unique neighborhoods — allow homebound readers to travel in their minds.

“Sitting in cafes, going book clubs. Browsing in a bookstore in fictional world,” she says. “All the stuff you can’t do right now.”

Unlike big blockbuster stories that revolve around one near-superhuman character (who is usually a man), cozy series cultivate an amateur sleuth (usually a woman) and a cast of quirky secondary characters. Readers become attached to the entire ensemble, says author Bree Baker, and consider them old friends. That's why readers love series that stretch to multiple books.

“I think we all need a place to belong, at the core of everything. We need to have our people,” Baker says.

And at a time when we can’t see our own people in real life, fictional stand-ins will have to do. Solving a murder in one’s mind, dreaming of the day when we can languidly enjoy a coffee and conversation with friends, knowing that what’s right will prevail in the end — those are the reasons people turn to cozies. And, not coincidentally, they overlap with the ways people are coping at this moment in history.

“We have enough horror in our day to day lives,” Burns says. “Right now, that’s all I want to do is escape. Escape into a world where justice prevails.”

Former Associated Press journalist Tamara Lush, who worked for the AP from 2008 to 2021, is the author, under the pseudonym Tara Lush, of “Grounds for Murder (A Coffee Lover's Mystery)” (2020), a cozy mystery published by Crooked Lane Books. Follow her on Twitter at https://twitter.com/TamaraLush