Sri Lankan Roman Catholics attended Mass dressed in black on Sunday, with prayers and protests calling for justice for those killed in coordinated suicide bomb attacks on Easter Sunday two years ago.

Church bells tolled and prayers were chanted at 8:45 a.m., the time when bombs were detonated almost simultaneously at two Roman Catholic churches and a Protestant church during Easter services on April 21, 2019. Bombs were also set off at three top hotels targeting locals and foreigners who were eating breakfast.

More than 260 people, including 171 from the two Catholic churches, were killed in the attacks, which were blamed on two local Islamic extremist groups that had pledged allegiance to the Islamic State group. 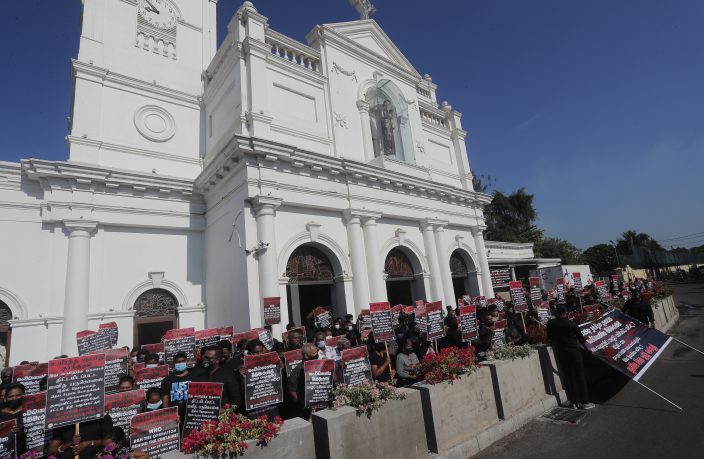 A presidential inquiry commission has handed its final report to President Gotabaya Rajapaksa, who has shared parts of it with Catholic and Buddhist religious leaders. The report has also been sent to the attorney general for legal action.

However, the archbishop of Colombo, Cardinal Malcolm Ranjith, said the report had concentrated more on the failures of the then-government in preventing the attacks despite early warnings, rather than finding out the handlers of the groups accused of carrying out the bombings.

“No one who wants to promote hatred and religious strife will receive our support. We believe there should be unity and brotherhood among different ethnic and religious groups all over the world," Ranjith said Sunday. 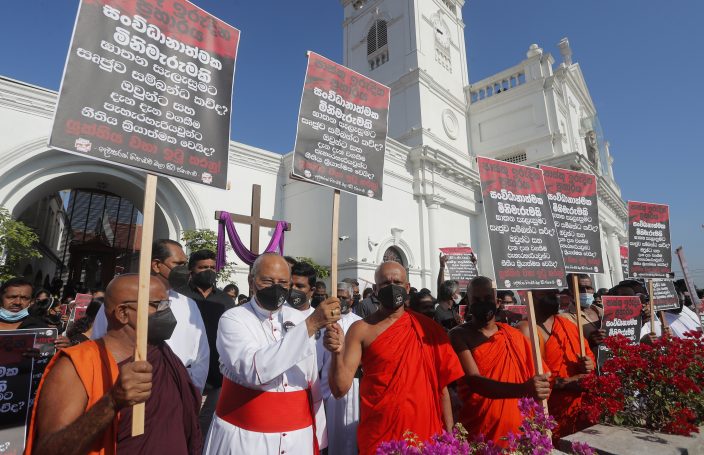 Cardinal Malcolm Ranjith, archbishop of Colombo, second left, along with Buddhist monks and other Catholic devotees hold placards during a protest demanding justice for the 2019 Easter Sunday bomb attack victims out side the St. Anthony's church, one of attack sites, in Colombo, Sri Lanka, Sunday, March 7, 2021. Placards read, “Easter Sunday Massacre, Who ran the operation behind the curtain” (AP PhotoEranga Jayawardena)

“Today Holy Father Pope Francis has visited Iraq and has had a discussion with the Shia leaders (in Iran). It shows religious leaders in the world think about unity and brotherhood, not about creating strife. Therefore I request anyone inclined to create conflict on account of religion to give up that idea,” he said.

At St. Sebastian's Church in Negombo, a predominantly Catholic area north of Colombo where 115 people were killed in the Easter attacks, parishioners attended Mass on Sunday dressed in black and held placards outside the church in a silent “Black Sunday” protest.

“The main purpose of this is to show the people and our rulers that justice has not happened for the victims of the Easter attacks," said Auxiliary Bishop the Rev. Maxwell Silva, who celebrated Mass at the church. 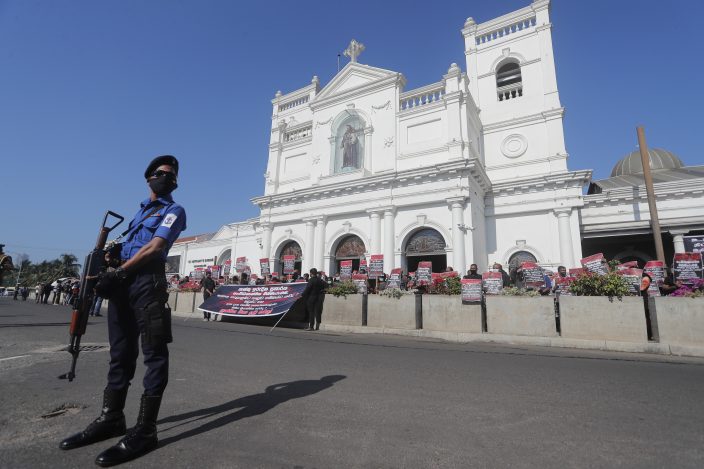 A policeman guards as Catholic devotees hold placards during a protest demanding justice for the 2019 Easter Sunday bomb attack victims out side the St. Anthony's church, one of attack sites, in Colombo, Sri Lanka, Sunday, March 7, 2021. (AP PhotoEranga Jayawardena)

“We believe the commission report is not genuine and it did not do any justice to those who suffered," said Manilal Ranasinghe, who attended Mass at St. Mary's Church in Dehiwala, south of Colombo.

Political infighting between the then-president and prime minister resulting in a communications breakdown and lapse of security coordination was said to have enabled the attacks despite foreign intelligence warnings.

Rajapaksa told a public gathering Saturday that the report blamed the government at the time for letting its guard down on national security, and that his government will punish those responsible.