Catalonia’s former regional President Carles Puigdemont has vowed to keep fighting extradition back to Spain if the European Union’s parliament strips him of his immunity as a lawmaker this week.

Puigdemont and two fellow Catalan separatists won seats in the European Parliament in 2019, two years after fleeing Spain because they had led a failed secession attempt for Catalonia, which Spain considered illegal.

On Monday, Puigdemont, along with cohorts Toni Comín and Clara Ponsatí, face a vote by the European Parliament on whether to lift their immunity as lawmakers, a move that has been recommended by the parliament’s Legal Affairs Committee. 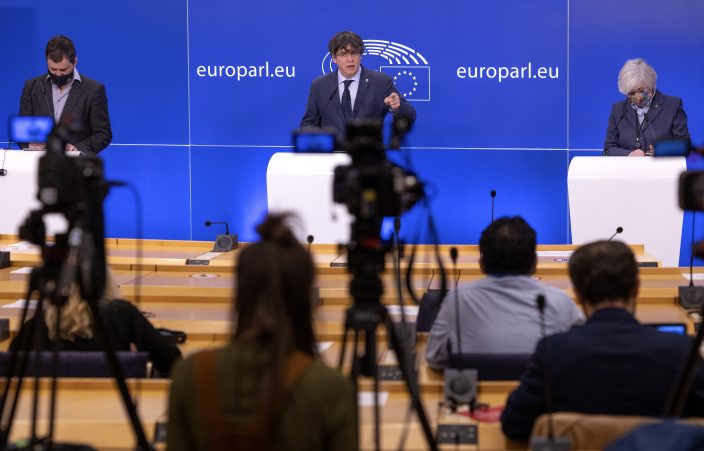 “We contemplate all scenarios, obviously even that we will lose our immunity, which is the most likely,” Puigdemont told The Associated Press on Saturday evening from his residence in Waterloo, Belgium. “But we know that would not be the end of the road.”

Lifting their immunity would allow Spain to once again pursue their extradition to stand trial like fellow separatist leaders who remained in Spain and were found guilty of sedition and the misuse of public funds for the 2017 breakaway bid.

So far, courts in Belgium, Germany and Britain have refused to send Puigdemont and his colleagues back on grounds of sedition as requested by Spain. Outstanding arrest warrants in Spain mean they would be immediately detained if they attempted to return home.

Puigdemont said besides resisting in the national courts, the three will also “take our case to the Court of Justice of the European Union.”

Puigdemont appealed to fellow lawmakers on the grounds that his cause is shared by other minorities in larger European nations.

“The question is whether political persecution is accepted. If political minorities, nationalists and dissidents have the same right as others to be represented, to do politics, they will be voting on that,” Puigdemont said.

The EU parliament’s Legal Affairs Committee did not see any threat for political persecution when it analyzed their case last month.

In October 2017, Puigdemont’s regional government ignored warnings from Spain’s top courts that authorizing a referendum on independence would be unconstitutional. They pushed ahead anyway, and hundreds of people were injured in a police crackdown on the day of the vote. The pro-secession side won the vote by a landslide with most unionists not voting.

Subsequent official elections have repeatedly shown that Catalan voters are equally split by the secession question.

After issuing a declaration of independence that did not have any practical effect, Puigdemont fled Spain for Brussels before prosecutors could issue an arrest warrant.

Spanish courts have handed down damaging corruption verdicts against the conservative Popular Party that ruled Spain in 2017 and are investigating the alleged financial misdoings of former King Juan Carlos I. Even so, Puigdemont believes that Spanish courts are not impartial when hearing cases involving Catalan separatists.

“In Spain, the courts are not free of political interests,” he said. “The justice system is clearly biased and we are guilty from the start of any trial.”

Despite the setbacks to his cause, Puigdemont sees the movement he helped foster in a strong position after pro-secession parties retained a majority of seats in the Barcelona-based parliament's latest election.

“Sooner or later there will be another opportunity,” to break away, he said. “We have to learn our lessons. We have to accumulate power, and we have to be well prepared.”

Spain's Cabinet aims for a fresh start by pardoning Catalans