Rangers won its first Scottish Premiership title in 10 years on Sunday to complete its recovery from financial implosion and being forced to start again in the fourth division.

A world record 55th domestic league title — although some rivals will claim it is the reborn club's first — was sealed after Glasgow rival Celtic drew 0-0 with Dundee United.

The pandemic-defying fan celebrations outside Ibrox began the previous day as Rangers beat St. Mirren 3-0. Now Steven Gerrard’s side has an unassailable lead of 20 points with six games to spare. 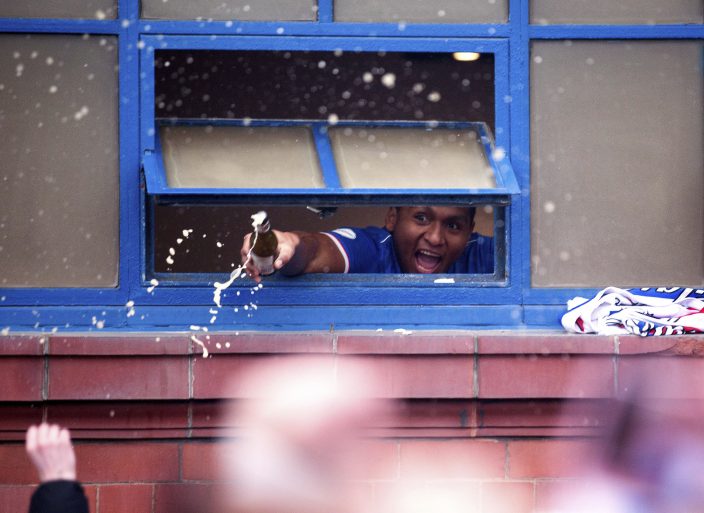 Rangers' Alfredo Morelos looks from a window as he celebrates with fans outside the ground after winning in the Scottish Premiership match against St Mirren, at Ibrox Stadium in Glasgow, Scotland, Saturday March 6, 2021. Some thousands of fans gathered outside the stadium celebrating the win against St. Mirren, putting them on the brink of securing the Scottish Premiership title. (Robert PerryPA via AP)

Celtic has dominated since Rangers was demoted to the lowest professional league in 2012 but has now been prevented from winning the title for an unprecedented 10th straight season, and for a 52nd time overall.

It is the first league title ever won by Gerrard, who spent most of his playing career at Liverpool. Gerrard came agonizingly close in 2014 to finally landing the one club prize that eluded him: The Premier League title. Adding to the anguish, Gerrard’s own slip against Chelsea contributed to a 2-0 loss that ended up costing Liverpool the title as Manchester City emerged victorious.

After seeing out the final two years of his his playing career at the Los Angeles Galaxy, the midfielder retired from playing in 2016 and embarked on his coaching career with Liverpool's youth teams.

Gerrard made the step up to first-team management in 2018 when he was hired by a Rangers side in the doldrums after being thrashed 4-0 by Celtic in a Scottish Cup semifinal. It has taken three years for Gerrard to restore Rangers to its once-customary position as champions of Scotland.