Democrats may delight in their brightening prospects in Arizona and Georgia, and may even harbor glimmers of hope in Texas, but their angst is growing in Florida, which has a reputation as a swing state but now favors Republicans and could be shifting further out of reach for Democrats.

As the jockeying begins to take on Gov. Ron DeSantis and U.S. Sen. Marco Rubio in 2022, Democrats' disadvantage against Republicans is deeper than ever, as they try to develop a cohesive strategy and rebuild a statewide party deep in debt and disarray.

Former President Donald Trump’s brand of populism has helped power a GOP surge in Florida, where Trump defeated now-President Joe Biden by more than 3 percentage points last fall — more than doubling the lead he had against Hillary Clinton. Republicans also snatched away two congressional seats and widened their majorities in the statehouse. FILE - In this Oct. 22, 2020 file photo, Democrats take part in a rally outside a union hall in Jacksonville, Fla., on Thursday, Oct. 22, 2020, as Florida Agriculture Commissioner Nikki Fried speaks. Democrats hope to make deeper strides in changing their fortunes in a state that has become friendlier place for Republicans. Fried is contemplating a challenge to Republican Gov. Ron DeSantis. (AP PhotoBobby Caina Calvan, File)

And that was despite $100 million spent by Michael Bloomberg to help Democrats in the state. When the spending tally is complete, the last election cycle in Florida is expected to rank as among the most expensive in state history. The lack of return in Florida could point the national party and donors to invest their efforts and largesse elsewhere.

“I don’t know anybody who’s happy with investing $100 million and not winning,” said Manny Diaz, the new chair of the Florida Democratic Party.

“I’ve heard people ask: Do we give up on Florida? They say we won the White House with Georgia and Arizona, and we didn’t need Florida,” Diaz said. “I admit that shouldn’t be where we are today.” 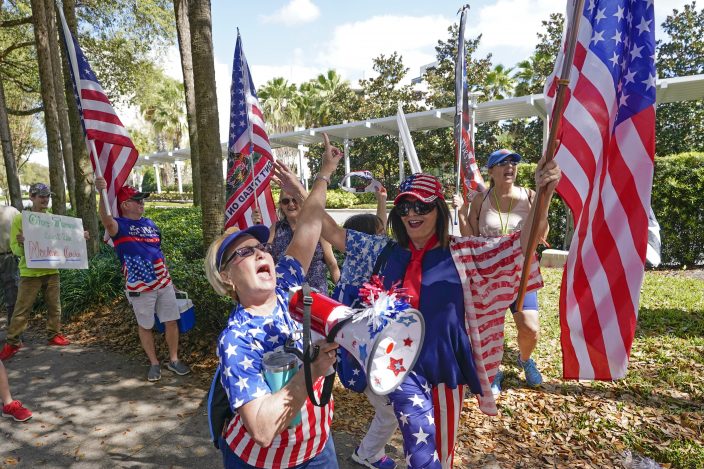 FILE - In this Sunday, Feb. 28, 2021 file photo, Marcia English, center, leads a group of former President Donald Trump supporters in a song outside the convention center at the Conservative Political Action Conference (CPAC) in Orlando, Fla. Democrats hope to make deeper strides in changing their fortunes in a state that has become friendlier place for Republicans. The state's only Democrat in statewide office, Agriculture Commissioner Nikki Fried is contemplating a challenge to Republican Gov. Ron DeSantis. (AP PhotoJohn Raoux, File)

Steve Schale, a Democratic strategist, said the state party needs to show that “things are moving in a positive trajectory.”

“One of my concerns is that it’s going to be a big lift to get people spending money here again,” Schale said.

Meanwhile, Florida’s Democratic Party ran up debts of up to $860,000 and had to cancel health insurance coverage for party employees late last year — prompting the national party and other states' party organizations to provide some assistance. FILE - In this Tuesday, March 1, 2021 file photo, Florida Gov. Ron DeSantis fist bumps with legislators as he enters the House of Representatives prior to his State of the State address at the Capitol in Tallahassee, Fla. Democrats hope to make deeper strides in changing their fortunes in a state that has become friendlier place for Republicans. The state's only Democrat in statewide office, Agriculture Commissioner Nikki Fried is contemplating a challenge to Republican Gov. DeSantis. (AP PhotoPhil Sears, File)

It’s clear Democrats are losing ground, said Michael Binder, the director of the University of North Florida Public Opinion Research Laboratory. Democrats have had many more high-profile defeats than wins in recent years and have not won a gubernatorial race in a quarter-century.

“Yes, we have all these close races — but it’s the Republicans who are winning,” Binder said.

In 2008, Florida Democrats enjoyed a nearly 700,000 voter-registration advantage over Republicans, providing a considerable cushion when then-Sen. Barack Obama beat Republican Sen. John McCain by fewer than 205,000 votes in the state. Republicans have narrowed that registration cushion considerably in recent years.

Now, the state has only one Democrat in statewide office, Agriculture Commissioner Nikki Fried, who is positioning herself for a run for higher office, possibly for governor.

Key Democrats argue it would be a mistake if national donors leave Florida to fend for itself. In presidential elections, the state has a bonanza of electoral college votes — currently 29 but likely to grow to 31 because of the state’s booming population.

Diaz, the state party chairman, is trying to reverse the slide in its voter registration advantage over Republicans. As of Jan. 31, its lead had dwindled to only 110,000 voters. Meanwhile, the ranks of non-affiliated voters have swelled from 2.1 million in 2008 to more than 3.8 million today.

Over the past decade, the state has grown by nearly 2.9 million residents, many drawn by the state’s climate and relative affordability. Many appear to arrive from more conservative parts of the country, like the Midwest.

“We’re finding that these new registrants are more right of center,” said Ryan Tyson, a Republican pollster and strategist, citing the party’s data analysis. “Democrats are already at a disadvantage with money and candidates, and when you add the disadvantage of the influx of new participants, that’s a tough hill to climb.”

"I think they’re asking people to step into a buzz saw,” Tyson said of Democrats considering a statewide run.

Susie Wiles, who ran the Trump campaign in Florida in 2020, said Democrats could still win with the right candidate, a compelling message and sufficient financial backing. She warns her fellow Republicans about “resting on our laurels” and risk losing their own donors.

“I don’t subscribe to the theory that Florida has gone red. I kind of roll my eyes, honestly, because I know how hard it is to win here, frankly, for either party,” Wiles added.

Despite the coronavirus pandemic, Republicans launched a voter registration blitz last year that went mostly unchallenged by Democrats, prompting criticism from among their own that Florida’s Democratic Party was not fighting hard enough to win over voters.

“We need to be constantly present in minority communities, and not only show up when it’s time to vote,” said state Sen. Annette Taddeo, a Miami Democrat who is considering a run for governor and who has long criticized the state party for not doing more to boost its ranks. She pointed to a downturn in Democratic support from Hispanic voters in South Florida as decisive in the presidential race.

Taddeo insists that Democrats can still win in Florida, even if Republicans might now have an edge.

Other Democrats haven’t given up either.

“If you walk past the roulette wheel and it’s come up red nine out of the last 10 times, it doesn’t mean the next spin is going to be red,” said Don Hinkle, a Tallahassee attorney and Democratic fundraiser.

But should donors gamble on Florida’s track record?

“The reality is we don’t have a choice,” he said. “You can’t walk away from a fight — because the stakes are too high.”