Cleveland Indians third baseman José Ramírez and slugger Franmil Reyes have been isolated from their teammates at spring training after breaking COVID-19 protocols.

Manager Terry Francona said Sunday that the two players have been sent to their temporary homes in Arizona as the Indians await word from the league as to when they can rejoin the team.

Francona said Reyes drove to the Indians' exhibition game on Friday in Mesa and went to get a haircut following the 10-4 win. 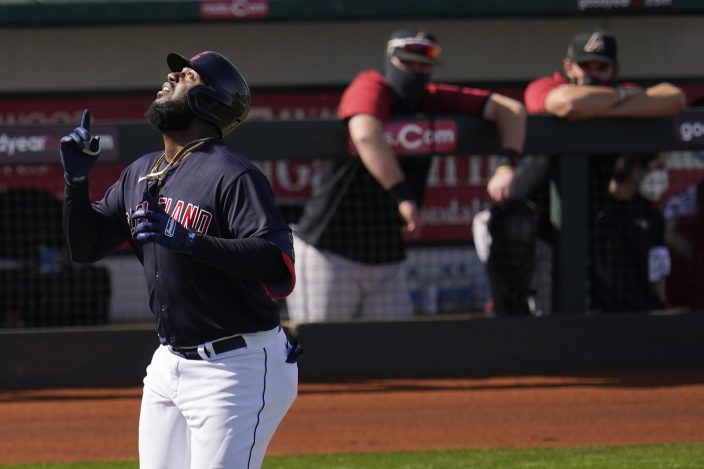 Cleveland Indians' Franmil Reyes looks to the sky as he arrives at home plate after hitting a home run against the Arizona Diamondbacks during the fourth inning of a spring training baseball game Wednesday, March 3, 2021, in Goodyear, Ariz. (AP PhotoRoss D. Franklin)

Reyes, who had a similar misstep last year when spring training resumed after the coronavirus-caused shutdown, told the Indians that he and Ramirez then went out to dinner and were indoors, which violates COVID-19 guidelines established by Major League Baseball and the players' union.

Francona said Reyes and Ramirez came to the team's complex on Saturday and were immediately sent home. They did not have contact with any other players or team personnel.

“We’re pretty fortunate here,” Francona said. "We have some medical people who are right on top of things and they came right to me and they said: ‘Look, this is what we’re doing. We’re informing the league.’ The players themselves actually self-reported that they had made a mistake.

“So we told them: ‘This is not our rules. These are the rules that the players' association and Major League Baseball came up with. We have to enforce them.’”

Francona said he has spoken to both players, who understand they could have put others in jeopardy.

“They were both upfront and honest with us about what happened,” Francona said. “We’re not trying to put guys in the penalty box. We try to talk to guys almost every day. ‘Hey, this is gonna happen if — it doesn’t matter if you agree with it or not. These are the protocols that are in place and you have to live by it.’”

Last season, the Indians were forced to isolate starting pitchers Mike Clevinger and Zach Plesac when they broke COVID-19 protocols by going out to eat while the team was in Chicago. Clevinger was traded to San Diego a few weeks later.