IRAQ-POPE — Pope Francis urged Iraq’s Christians to forgive the injustices against them by Muslim extremists and to rebuild as he visited the wrecked shells of churches and met ecstatic crowds in the community’s historic heartland, which was nearly erased by the Islamic State group’s horrific reign.. By Nicole Winfield and Samya Kullab. SENT: 1,190 words, photos. With IRAQ-POPE-THE LATEST. 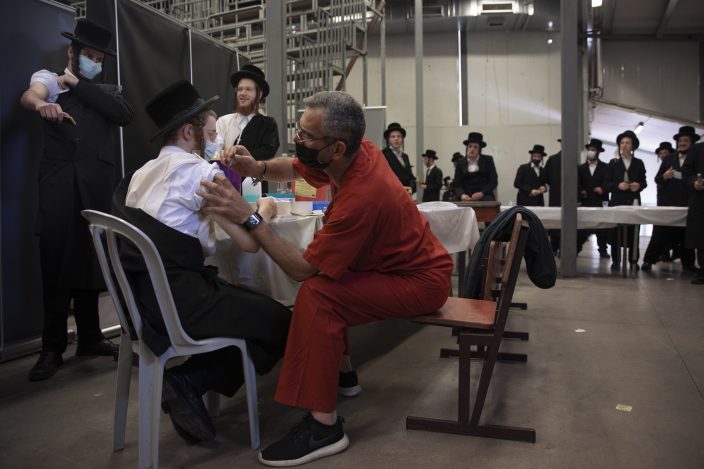 An ultra-Orthodox Jewish man receives his second dose of the Pfizer-BioNTech COVID-19 vaccine at a coronavirus vaccination center set up at a synagogue in Bnei Brak, Israel, Sunday, March. 7, 2021. (AP PhotoOded Balilty)

VIRUS-OUTBREAK-RUSSIA-VACCINE-EXPORTS — Russia’s boast in August that it was the first country to authorize a coronavirus vaccine led to skepticism at the time because of its insufficient testing. Six months later, as demand for the Sputnik V vaccine grows, experts are raising questions again — this time, over whether Moscow can keep up with all the orders from the countries that want it. By Daria Litvinova. SENT: 1,260 words, photos.

BRITAIN-MEGHAN-AND-HARRY-INTERVIEW — The time has finally come for audiences to hear Meghan and Harry describe the backstory and effects of their tumultuous split from royal life. Tonight’s airing of a two-hour special hosted by Oprah Winfrey will provide the first, and unprecedented, peek into the couple’s departure from royal duties and the strains it has placed on them. By Entertainment Writer Jonathan Landrum Jr. SENT: 790 words, photos. UPCOMING: Will be updated after airing of interview, which begins at 8 p.m. With BRITAIN-MEGHAN-AND-HARRY-INTERVIEW-THE LATEST. 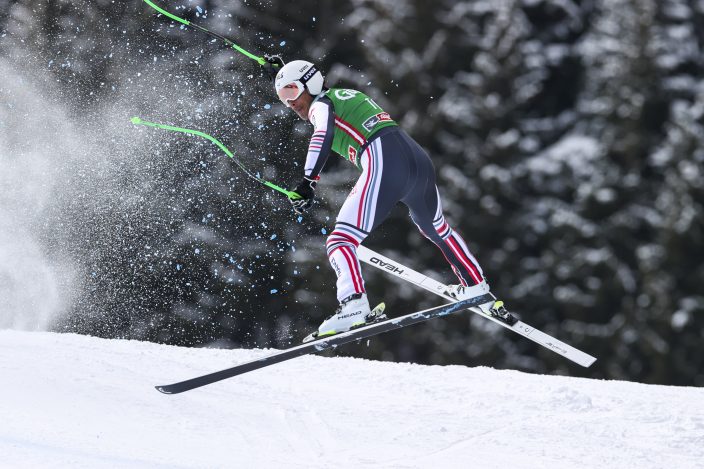 CYBERSECURITY-HIGH-YIELD-HACK — The SolarWinds hacking campaign blamed on Russian spies and the “grave threat” it poses to U.S. national security are widely known. A very different — and no less alarming — coordinated series of intrusions also detected in December has gotten considerably less public attention. Nimble, highly skilled criminal hackers believed to operate out of Eastern Europe hacked dozens of companies and government agencies on at least four continents by breaking into a single product they all used. By Technology Writer Frank Bayak. SENT: 1,040 words, photos.

MISINFORMATION-EN-ESPANOL — Before November’s election, Spanish-language misinformation inundated heavily Hispanic parts of the United States. This campaign relied on doctored videos and conspiracy theories. But the flow of misinformation in Spanish has only intensified since Election Day. First it promulgated Donald Trump’s baseless claims that the election was stolen. More recently, it has sought to undermine vaccination efforts against the coronavirus or spread falsehoods about the Biden administration. By Will Weissert. SENT: 1,800 words, photos. An abridged version of 990 words is available.

SOCIAL-MEDIA-LEGISLATIVE-PUSHBACK — Republican state lawmakers want social media giants to face costly lawsuits for policing content on their websites, taking aim at a federal law that prevents internet companies from being sued for removing posts. GOP politicians in two dozen states have introduced bills that would allow for civil lawsuits against platforms for what they call the “censorship” of posts, with many bills protesting the deletion of political and religious statements. By Anthony Izaguirre. SENT: 1,000 words, photos. This is the Monday Spotlight.

BOULDER PARTY-VIOLENCE — A prosecutor has vowed to bring charges against anyone that can be identified who damaged property or caused injuries at a party involving hundreds of people near the University of Colorado Boulder this weekend. SENT: 310 words.

VIRUS-OUTBREAK — Workers such as restaurant servers and retail clerks are balancing the anticipation of better earnings with concerns about keeping themselves safe as states lift mask mandates and ease restrictions on businesses. Some workers say they’re worried about getting COVID-19 as crowds return and resistance from co-workers and customers when they try to enforce their employers’ ongoing mask requirements. SENT: 1,240 words, photos. With VIRUS-OUTBREAK-THE LATEST (sent)

VIRUS-OUTBREAK-ONE-YEAR-DETROIT-LIVES — It was March 11 last year when Detroit Mayor Mike Duggan announced that the St. Patrick’s Day parade was canceled because a virus that had already sickened tens of thousands worldwide had reached Michigan. He was right. COVID-19 hit Detroit hard. But fast action by city leaders early in the pandemic may have slowed the rampant advance of the virus among Detroit’s largely Black population. SENT: 950 words, photos.

VIRUS-OUTBREAK-BRITAIN-BACK-TO-SCHOOL — British students, backed by a robust coronavirus testing program, are gearing up to return to school Monday after a two-month closure, in what Prime Minister Boris Johnson says is a plan to get the country “moving closer to a sense of normality.” SENT: 470 words, photos.

VIRUS-OUTBREAK-ISRAEL — Israel reopened most of its economy as it removed many of its remaining coronavirus lockdown restrictions, lifted by its successful vaccination campaign and giving a boost to Prime Minister Benjamin Netanyahu’s re-election hopes. SENT: 540 words, photos.

VIRUS-OUTBREAK-GERMANY-LAWMAKERS — A lawmaker with German Chancellor Angela Merkel’s party said he will give up his seat in parliament and leave politics after it emerged that his company profited from deals to procure masks early in the pandemic — drawing sharp criticism in an election year. SENT: 400 words.

VIRUS-OUTBREAK-FLORIDA-SITE-OVERRUN — A Florida vaccination site was overwhelmed after word spread it was inoculating all adults. SENT: 260 words.

VIRUS OUTBREAK-BRITAIN-QUEEN'S MESSAGE — Queen Elizabeth II has highlighted the importance of staying in touch with friends and families during the coronavirus pandemic. SENT: 270 words, photo.

VIRUS-OUTBREAK-THE-COZY-COUNTERBALANCE — The “cozy mystery,” a gentler form of murder fiction, is helping some readers get through a dizzying period of pandemic and polarization. Readers who are consuming this particular style of novel say a gently told tale of murder and mayhem whittles the sharp edges of reality to a manageable, smooth surface. SENT: 1,010 words, photos.

CONGRESS-BIDEN — With President Joe Biden on the verge of his first big legislative victory, a key moderate Democrat says he is open to changing Senate rules so it’s harder for Republicans to stop legislation. But Sen. Joe Manchin doesn’t want to abolish the procedural hurdle known as a filibuster, an option favored by progressives. UPCOMING: 600 words by 3 p.m., photos.

CUOMO-SEXUAL HARASSMENT — New York Gov. Andrew Cuomo said Sunday he will not resign in the face of new allegations from a former aide who said she thought his behavior was inappropriate. UPCOMING: 300 words by 3 p.m., photos.

FLORIDA-POLITICS-DEMOCRATS — Democrats may delight in their brightening prospects in Arizona and Georgia, and may even harbor glimmers of hope in Texas, but their angst is growing in Florida, which has a reputation as a swing state but now favors Republicans and could be shifting further out of reach for Democrats. SENT: 930 words, photos.

GEORGE-FLOYD-OFFICER-TRIAL-LEGAL — A Minneapolis police officer was swiftly fired and charged with murder after bystander video showed him pressing his knee into George Floyd’s neck, ignoring the Black man’s cries that he couldn’t breathe. But even with that powerful footage, legal experts say the case isn’t a slam dunk. Jury selection begins Monday in Derek Chauvin’s trial, which is expected to come down to two key questions: Did Chauvin’s actions cause Floyd’s death, and were his actions reasonable? SENT: 980 words, photos. With GEORGE-FLOYD-OFFICER-TRIAL-KEY-PLAYERS (sent)

RACIAL-INJUSTICE-SELMA — The commemoration of a pivotal moment in the fight for voting rights for African Americans will honor four giants of the civil rights movement who lost their lives in 2020, including the late U.S. Rep. John Lewis. SENT: 700 words, photos.

KILLING-WOLVES — Payments for dead wolves. Unlimited hunting of the animals. Shooting wolves from the air. Wolf hunting policies in some states are taking an aggressive turn, as Republican lawmakers and conservative hunting groups push to curb their numbers and propose tactics shunned by many wildlife managers. SENT; 1,070 words, photos.

DISPUTED PIPELINE-TENNESSEE — A planned oil pipeline that would run through Memphis, Tennessee, and into north Mississippi is getting opposition from environmentalists, activists and local politicians. SENT: 1,000 words, photo.

MYANMAR — Myanmar careened deeper into crisis as police occupied hospitals and universities and reportedly arrested hundreds of people involved in protesting last month’s military seizure of power, while a coalition of labor unions called a strike for Monday. Tension was high in the country’s biggest city, Yangon, where for a second night running gunshots from heavy weapons rang out randomly in the streets of several neighborhoods after the start of an 8 p.m. curfew. SENT: 950 words, photos. With MYANMAR-SANCTIONS — Escalating violence ups pressure for Myanmar sanctions (sent).

PERSIAN-GULF-TENSIONS — A pair of B-52 bombers flew over the Mideast, the latest such mission in the region aimed at warning Iran amid tensions between Washington and Tehran. SENT: 460 words, photo. With IRAN-NUCLEAR-DEAL — Iranian President Hassan Rouhani said his country was prepared to take steps to live up to measures in the 2015 nuclear deal with world powers as soon as the United States lifts economic sanctions on Iran. SENT: 250 words, photos.

YEMEN — The Saudi-led coalition fighting Iran-backed rebels in Yemen said that it had launched a new air campaign on the country’s capital and other provinces, in retaliation for missile and drone attacks on Saudi Arabia. SENT: 680 words, photos.

IRAN-DUAL NATIONALS — A British-Iranian woman held in an Iranian prison for five years on widely refuted spying charges ended her sentence, her lawyer said, although she faces a new trial and cannot yet return home to London. SENT: 760 words, photos.

KASHMIR-ROHINGYA — Authorities in Indian-controlled Kashmir have sent at least 168 Rohingya refugees to a holding center, police said, in a process that they say is for the deportation of thousands of the refugees living in the region. SENT: 370 words, photo.

SPAIN-CATALONIA — Catalonia’s former regional President Carles Puigdemont has vowed to keep fighting extradition back to Spain if the European Union’s parliament strips him of his immunity as a lawmaker this week. SENT: 540 words, photos.

AFGHANISTAN — The former head of women police in a southern Afghanistan province was seriously wounded and her husband — also a police officer — was killed in an attack by unidentified gunmen, provincial officials said. SENT: 360 words, photos.

EMIRATES-FACIAL-RECOGNITION — Dubai’s airport, the world’s busiest for international travel, has introduced an iris-scanner that verifies one’s identity and eliminates the need for any human interaction when entering or leaving the country. It’s the latest artificial intelligence program the United Arab Emirates has launched amid the surging coronavirus pandemic. But the efforts also have renewed questions about mass surveillance in the federation of seven sheikhdoms. SENT: 860 words, photos.

CHINA-TRADE — China’s exports surged 60.6% over a year earlier in the first two months of 2021, after factories reopened and global demand started to recover from the coronavirus pandemic. SENT: 490 words, photos.

NETHERLANDS-DRONES-VS-MOTHS — Dutch cress grower Rob Baan has enlisted high-tech helpers to tackle a pest in his greenhouses: palm-sized drones seek and destroy moths that produce caterpillars that can chew up his crops. SENT: 450 words, photos.

BKN-ALL-STAR-GAME — Team LeBron takes on Team Durant — minus injured Kevin — in the NBA All-Star Game, a scaled-down, one-day-only showcase that many felt should’ve not be played in the midst of a pandemic. By Paul Newberry. UPCOMIGNG: 750 words, photos. Game starts at 8 p.m. With BKN-VIRUS-OUTBREAK-NBA-ALL-STAR — Embiid, Simmons to miss All-Star Game over contact tracing. SENT: 710 words, photos.