The board that oversees the U.S. Capitol Police is beginning a search for a permanent police chief, a person familiar with the matter said, as the fallout from the Jan. 6 riot at the Capitol continues.

Acting Chief Yogananda Pittman has faced scrutiny from Capitol Hill leaders and congressional committees over law enforcement failures that allowed thousands of rioters to overtake police officers during the insurrection.

The search for the permanent leader of the force, which has more than 2,300 sworn officers and civilian employees, will be nationwide, and while Pittman can apply for the position, she is not guaranteed it, according to the person, who had direct knowledge of the search. This person was not authorized to discuss the matter publicly and spoke on condition of anonymity.

The Capitol is seen through security fencing, Thursday, March 4, 2021, on Capitol Hill in Washington. Capitol Police say they have uncovered intelligence of a "possible plot" by a militia group to breach the U.S. Capitol on Thursday, nearly two months after a mob of supporters of then-President Donald Trump stormed the iconic building to try to stop Congress from certifying now-President Joe Biden's victory. (AP PhotoJacquelyn Martin)

The Capitol Police and other law enforcement agencies are trying to determine the best way to secure the Capitol over the long term. Officials last week quibbled over requesting National Guard reinforcements to remain in the District of Columbia and whether to remove the massive fence that has encircled the Capitol grounds since January.

The Capitol Police Board, which includes the House and Senate sergeant at arms and the Architect of the Capitol, is charged with oversight of the police force.

In recent weeks, Pittman has been pressed by lawmakers to explain why the force wasn’t prepared to fend off the violent mob of supporters of then-President Donald Trump even though officials had compiled specific, compelling intelligence that extremists were likely to attack Congress and try to halt the Jan. 6 certification of Joe Biden's presidential victory 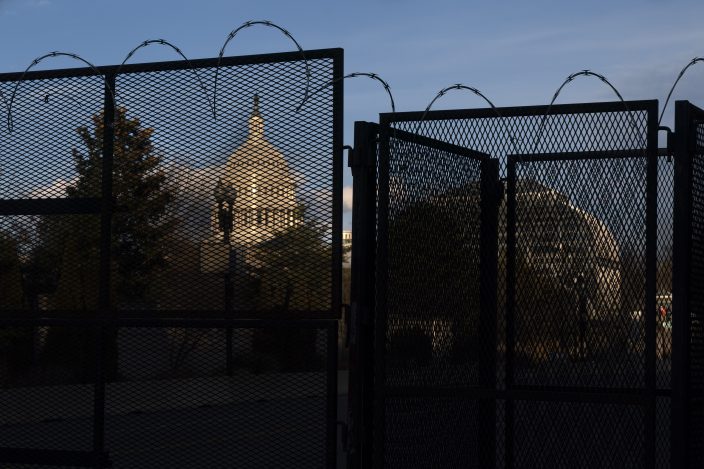 A section of fencing with razor wire blocking the Capitol grounds, Monday, March 1, 2021, is seen in Washington. (AP PhotoJacquelyn Martin)

Pittman, who was previously in charge of the agency’s intelligence operations, has said officials were so concerned by the intelligence that they took extraordinary measures, including giving assault-style rifles to agents guarding congressional leaders and having other officers waiting with evacuation vehicles for top lawmakers to flee the Capitol, if needed.

But as the invaders wielded metal pipes, planks of wood, stun guns and bear spray, the vastly outnumbered rank-and-file officers inside the building were left to fend for themselves without proper communication or strong guidance from supervisors. The officers weren’t sure when they could use deadly force, had failed to properly lock down the building and could be heard making frantic radio calls for backup as they were shoved to the ground and beaten by rioters.

Five people died, including a Capitol Police officer and a woman who was shot by police.

Pittman last week disclosed to lawmakers a possible plot by far-right militias to target the Capitol on March 4, a date that some conspiracy theorists said would mark Trump’s restoration to power. March 4 was the original presidential inauguration day until 1933, when it was moved to Jan. 20. There was no violence last Thursday.

She has since appealed to congressional leaders for help securing the continued presence of the National Guard.

Pittman has also testified that the large, razor-tipped fence encircling the Capitol after the riot should stay up indefinitely. Some lawmakers on both sides have called for the fence to start to be taken down.

Pittman lost the support of much of the agency’s rank and file after Jan. 6, with the Capitol Police’s union voting overwhelmingly to show no confidence in her. Several officers have called for the elevation of agency leaders who were more directly seen fighting the rioters, including Thomas Loyd, an inspector who gave an initial lockdown order before Pittman did.

Pittman became the first Black and female police chief in the department’s nearly 200-year history. Earlier, she was one of the first two Black women promoted to captain.

The department has long faced allegations of racism, notably in a 2001 class-action lawsuit brought on behalf of more than 300 current and former officers who alleged they lost out on promotions and assignments to less-qualified black officers and were harassed with racial epithets.