With President Joe Biden on the verge of his first big legislative victory, a key moderate Democrat said Sunday he's open to changing Senate rules that could allow for more party-line votes to push through other parts of the White House’s agenda such as voting rights.

West Virginia Sen. Joe Manchin stressed that he wants to keep the procedural hurdle known as the filibuster, saying major legislation should always have significant input from the minority party. But he noted there are other ways to change the rules that now effectively require 60 votes for most legislation. One example: the “talking filibuster,” which that requires senators to slow a bill by holding the floor, but then grants an “up or down” simple majority vote if they give up. 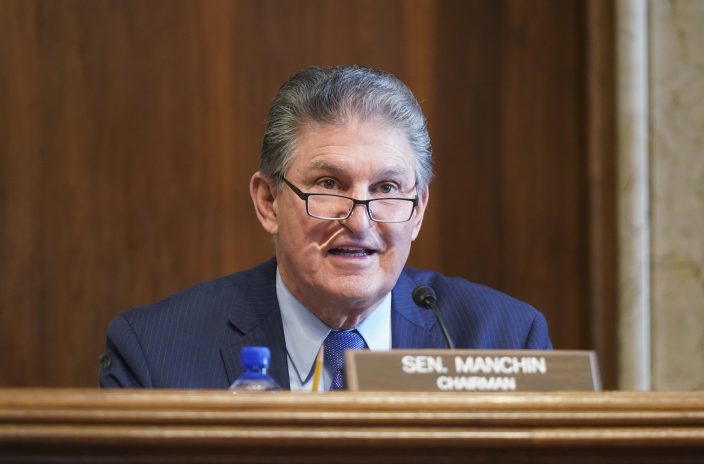 FILE - In this Feb. 24, 2021, file photo, Sen. Joe Manchin, D-W.Va., speaks during a Senate Committee on Energy and Natural Resources hearing on the nomination of Rep. Debra Haaland, D-N.M., to be Secretary of the Interior on Capitol Hill in Washington. (Leigh VogelPool via AP, File)

“If you want to make it a little bit more painful, make him stand there and talk,” Manchin added. “I’m willing to look at any way we can, but I’m not willing to take away the involvement of the minority.”

Democrats are beginning to look to their next legislative priorities after an early signature win for Biden on Saturday, with the Senate approving a $1.9 trillion COVID-19 relief plan on a party-line 50-49 vote.

Final passage is expected Tuesday in the House if leaders can hold the support of progressives frustrated that the Senate narrowed unemployment benefits and stripped out an increase to the federal minimum wage to $15 an hour. 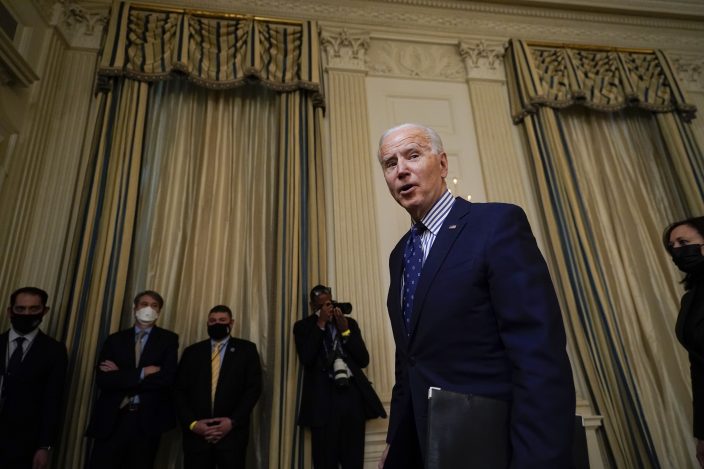 Vice President Kamala Harris, right, and President Joe Biden leave after Biden spoke in the State Dining Room of the White House, Saturday, March 6, 2021, in Washington. The Senate approved a sweeping pandemic relief package over Republican opposition on Saturday, moving Biden closer to a milestone political victory that would provide $1,400 checks for most American and direct billions of dollars to schools, state and local governments, and businesses. (AP PhotoAlex Brandon)

Over the weekend, the chair of the Congressional Progressive Caucus, representing around 100 House liberals, called the Senate’s weakening of some provisions “bad policy and bad politics." But Rep. Pramila Jayapal, D-Wash., also characterized the changes as “relatively minor concessions” and emphasized the bill retained its “core bold, progressive elements.”

Biden says he would sign the measure immediately if the House passed it. The legislation would allow many Americans to receive $1,400 in direct checks from the government this month.

“Lessons learned: If we have unity, we can do big things,” a jubilant Senate Majority Leader Chuck Schumer, D-N.Y., told The Associated Press in an interview after Saturday's vote.

Still, the Democrats’ approach required a last-minute call from Biden to Manchin to secure his vote after he raised late resistance to the breadth of unemployment benefits. That immediately raised questions about the path ahead in a partisan environment where few, if any, Republicans are expected to back planks of the president’s agenda.

Democrats used a fast-track budget process known as reconciliation to approve Biden’s top priority without Republican support, a strategy that succeeded despite the reservations of some moderates. But work in the coming months on other issues such as voting rights and immigration could prove more difficult.

Sen. Lindsey Graham, R-S.C., pledged that Senate Republicans would block passage of a sweeping House-passed bill on voting rights. The measure, known as HR 1, would restrict partisan gerrymandering of congressional districts, strike down hurdles to voting and bring transparency to the campaign finance system. It would serve as a counterweight to voting rights restrictions advancing in Republican-controlled statehouses across the country in the wake of Donald Trump’s repeated false claims about a “stolen” election.

“Not one Republican is going to vote for HR 1 because it’s a federal takeover of elections, it sets up a system where there is no real voter security or verification,” Graham said. “It is a liberal wish list in terms of how you vote.”

When asked about the voting rights bill, Manchin on Sunday left the door open to supporting some kind of a workaround, suggesting he could support “reconciliation” if he was satisfied that Republicans had the ability to provide input. But it was unclear how that would work as voting rights are not budget-related and would not qualify for the reconciliation process.

“I’m not going to go there until my Republican friends have the ability to have their say also,” Manchin said.

On Sunday, the anti-filibuster advocacy group “Fix Our Senate” praised Manchin’s comments as a viable way to get past “pure partisan obstruction" in the Senate.

“Sen. Manchin just saw Senate Republicans unanimously oppose a wildly popular and desperately-needed COVID relief bill that only passed because it couldn’t be filibustered, so it’s encouraging to hear him express openness to reforms to ensure that voting rights and other critical bills can’t be blocked by a purely obstructionist minority,” the group said in a statement.