FIFA president Gianni Infantino brokered a deal to give politically connected South African billionaire Patrice Motsepe a clear run to lead the African soccer confederation after the other three contenders withdrew over the weekend and backed Motsepe.

FIFA said the agreement for candidates Augustin Senghor of Senegal, Jacques Anouma of Ivory Coast and Ahmed Yahya of Mauritania to withdraw from the upcoming election — and unite behind Motsepe — came after meetings in Rabat, Morocco, last week. The deal was confirmed at another meeting on Saturday in Mauritania, FIFA said.

On that day, all four men appeared alongside Infantino at a ceremony celebrating “African unity” in the Mauritanian capital Nouakchott, and Infantino said it was the desire of all African soccer federations “to stop the divisions and get united.” 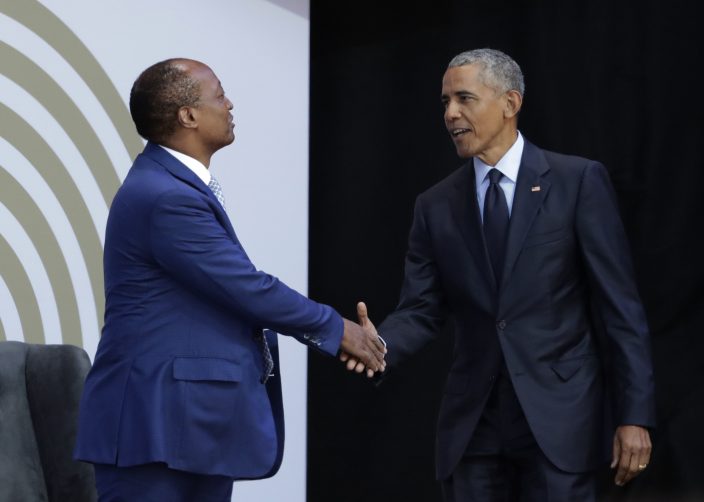 FILE - In this file photo dated Tuesday, July 17, 2018, former US President Barack Obama, right, shakes hands with Patrice Motsepe, as he arrives at the Wanderers Stadium in Johannesburg, South Africa, to deliver the 16th Annual Nelson Mandela Lecture. The election to lead African soccer is seeming to be dominated by FIFA president Gianni Infantino, who supports South African billionaire Patrice Motsepe to win the top job in a ballot next week. (AP PhotoThemba Hadebe, FILE)

FIFA said Motsepe would lead the Confederation of African Football with “a common program" that takes from the manifestos of all four men.

Reports said Senghor and Yahya would be given CAF vice president positions and Anouma a role as a consultant to Motsepe, although FIFA didn't announce any details of what agreements might have been made to allow Motsepe to stand unchallenged.

“The four leaders have reiterated that what unites them is much stronger than what could potentially divide them,” FIFA said. “This was the reason it was decided that they should join forces and form a team under the leadership of Patrice Motsepe.” Motsepe, a 59-year-old mining magnate and the brother-in-law of South African President Cyril Ramaphosa, is now almost certain to be elected CAF president in Rabat on Friday. With it, he would become a FIFA vice president.

The only possible stumbling block is if the man Motsepe is in line to replace, Ahmad Ahmad, overturns his five-year ban from soccer for financial misconduct at the Court of Arbitration for Sport and is allowed to stand for re-election. Even then, it appears unlikely that Ahmad would find enough votes to win with FIFA now openly backing Motsepe.

Ahmad, who was CAF president from 2017 until he was banned last year by FIFA, had his appeal hearing at CAS last week. A verdict is expected early in the week, possibly Monday.

Motsepe was a surprise candidate when he announced in November he would stand for the top job in African soccer. He owns South African club Mamelodi Sundowns but has never had a role at the African soccer body, or even his own national body. He was a lawyer before investing in gold mines in the late 1990s and became the first Black African billionaire on Forbes' list in 2008. He has an estimated net worth of $2.8 billion and is the ninth richest man in Africa.

He rapidly became the favorite for CAF president over the last few weeks after emerging as Infantino's preferred candidate. Infantino's involvement has stoked talk of election interference.

FIFA has been closely involved in the affairs of the African confederation since effectively taking over its running for six months in 2019 after it became dysfunctional under Ahmad.

Aware also of the significance of Africa’s 54 votes for his own position as FIFA president, Infantino has been close to CAF elections before.

Infantino attended a party hosted by Ahmad’s campaign manager in the run-up to the 2017 CAF election, giving rise to speculation he was backing Ahmad in the contest against longstanding CAF president Issa Hayatou. Hayatou had led African soccer for 29 years and was also a FIFA veteran. Infantino denied he was taking sides but Ahmad, a relative unknown, resoundingly beat Hayatou in a major surprise.