“It’s an off-day here tomorrow. Hopefully it rains and it’s cold,” he said on Sunday as he prepared for the team to take its first full break of spring training.

It’s not that Cora doesn’t like sunshine. He would just prefer that his players stay home with their families and not risk any potential COVID-19 exposure. 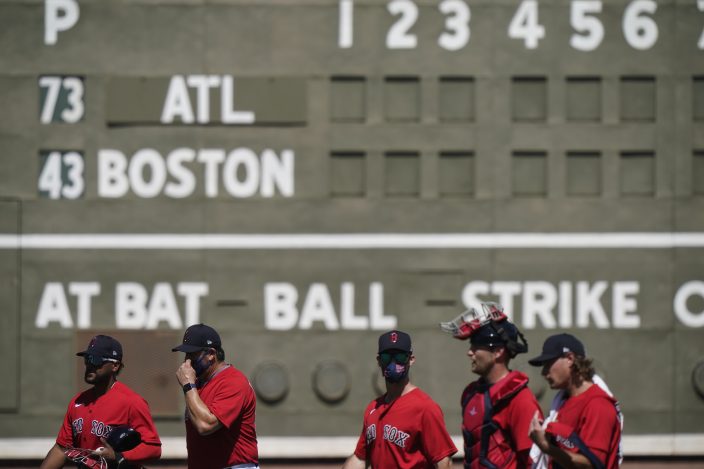 The Boston Red Sox's players walk on the field before a spring training baseball game against the Atlanta Braves on Monday, March 1, 2021, in Fort Myers, Fla. (AP PhotoBrynn Anderson)

With bad weather, he said, “There’s no temptation of going to the beach or going to an outdoor restaurant or whatever. So I’ll be praying for that.”

What started in the early days of the pandemic as a health concern has also become a competitive issue for baseball teams, who have been reminded over the past year that a player on the COVID-19 list can't help them win games.

“You protect yourself for the right reason, to protect your family. That’s No. 1,” Cora said. “But now we’re getting to the baseball side of it. We’ve done an outstanding job until today. But we’ve got to keep doing it the right way, because you don’t want to be that guy that’s going to miss two weeks because you weren’t responsible.”

Boston lost pitcher Eduardo Rodriguez for the entire season last year when his COVID-19 infection resulted in damage to his heart muscles. This season, they placed Kevin Plawecki and Franchy Cordero on the COVID-19 related injured list upon their arrival, but they have avoided an outbreak like the one that sent eight pitchers away from the Astros facility on Friday (it was not clear whether any had tested positive, or spent time in close contact with someone who had).

In the NFL, the Denver Broncos had to play a game without an actual quarterback. On Sunday, Philadelphia 76ers Joel Embiid and Ben Simmons were pulled from the NBA All-Star Game after going to a barber who tested positive. Golfers and tennis players have had to withdraw from tournaments after testing positive. And the Los Angeles Dodgers pulled Justin Turner from the World Series clincher after his test came back positive mid-game.

“You guys saw what happened in Houston,” Cora said on Sunday. “It’s never good that you test positive. But it’s getting to that point that we better to really take care of each other and keep doing what the things that we’re doing because it’s getting closer to the season.”

Baseball's spring training manual permits players and other team members to venture out for baseball activities and medical care, along with grocery shopping, takeout food pickup and outdoor physical activity.

“If you’re a baseball player you understand that there’s a lot of obstacles, a lot of no-nos," Cora said. “You’ve just got to be smart about it.”

And while Cora hopes his players will get a chance to relax, he won't be able to do so until he receives his nightly email with the results of everyone's COVID test.

“The best part of camp is when you get that email,” he said.

Also Sunday, Cora said that shortstop Xander Bogaerts is getting antsy about returning to full workouts after shutting down on Monday because of a sore shoulder. Bogaerts will take batting practice on Tuesday and DH over the weekend. He has been able to take grounders, but the team is limiting his throwing to protect his shoulder.

--Cora confirmed that the team has brought in utilityman Danny Santana as a non-roster invitee. Santana has a .260 average with 42 homers and 188 RBIs in seven seasons with Minnesota, Texas and Atlanta.

According to the Twitter account Red Sox Notes, in the previous four seasons only three players have hit 15 or more homers while playing every position other than pitcher and catcher: Marwin Gonzalez, Enrique Hernandez and Santana. All three are now with the Red Sox.

“Very versatile, athletic,” Cora said. “I think I’m repeating myself with the signings of position players.”

—Plawecki was reinstated from the COVID-19 injured list. He was placed on IL on Feb. 17, the day pitchers and catchers reported to spring training.